Ciara Wilson is an actor and dancer born and raised in Portland, Oregon. She began her career in the Pacific Northwest at the age of eight. As a young girl, Ciara could be heard in numerous radio voiceover ads and seen in many local television commercials. She also focused on her competitive dance career excelling in jazz, ballet, lyrical, tap and hip hop. At the age of eleven, Ciara began to pursue her passions in Los Angeles!

Since then, Ciara has worked on a variety of exciting projects. She can be seen on the Disney Junior Mini Series “It’s a Snackdown,” ABC’s “Speechless,” and Nickelodeon’s “Henry Danger.” However, Ciara is well known for her guest starring role on Disney Channel’s “Bizaardvark” as MMA fighter Vicki “Hot Head” Fuego. In 2017, she was awarded a Young Entertainer Award for best guest starring actress in a TV series for this role. Ciara’s specialty is sketch comedy and she can be found on the DreamWorksTV OMG! series on Amazon starring in over thirty hilarious sketch episodes. As a professional dancer, Ciara has also worked on music videos with Chris Brown, Usher, Gucci Mane and Fifth Harmony. In May 2018, it was announced that Ciara will be joining the cast of the Kim Possible Live Action movie as Athena set to air on Disney Channel in 2019.

In her free time, Ciara can be found spending time with family and friends. She enjoys playing pickleball, taking hip hop classes at the world-famous Millennium Dance Complex, and training with the advanced teen improv group at Second City. It’s always important to give back to the community that has supported her, so Ciara has worked with organizations that embrace individuality, inspire and empower others, and make a positive difference in the world. As an active force on social media, Ciara’s page is filled with puns, lighthearted jokes, and inspiration to remind others to always be themselves. Ciara’s goal is to ultimately show that girls can be funny, powerful, and a leading force in the world of comedy too. 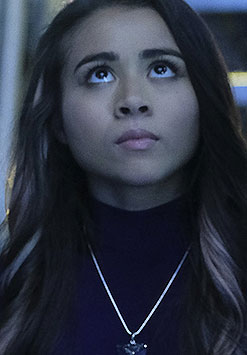