From the age of 4; Jadey discovered a keen interest in performance dance and began her training at Dance Academy where she learned a wide variety of dance styles. Not only did her training provide an excellent outlet for the enthusiastic and energetic youngster, it would also prove to be a fortunate precursor for the start of her professional acting career. At age 16, Jadey was accepted into a 3 year full time Musical Theatre School in London, where her love for dance followed and an interest in theatre performance became stronger.

Graduating at the age of 19, Jadey’s career as a professional dancer and model spiraled in the industry. Jadey was lucky enough to work on set of big productions such a working for the BBC and Channel 4, Worldwide TV Commercials, Music Videos, live performance and Jadey was the face of Nintendo Wii for Australia.

Although she has been working since age of 19 as a professional dancer, it only took an ad announcing an open casting call in London for Jadey to decide to finally step into the spotlight. The role was the female lead; the movie was Coolio Time Travel Gangster. Despite the lack of experience in film, Jadey auditioned, along with another 350 girls, she was finally chosen to play the role of Lara Darwin and was lucky enough to work with Director Paul J Lane. Since landing her first on screen role, Jadey has worked alone side Vin Diesel in Fast & Furious 6, Gary Daniels, Mickey Rourke & Eric Roberts in Skin Traffik, Simon Pegg & Nick Frost in The World’s End. Jadey has also trained with Hollywood Stunt Coordinator Dave Lea on a one to one basis for fighting for film. 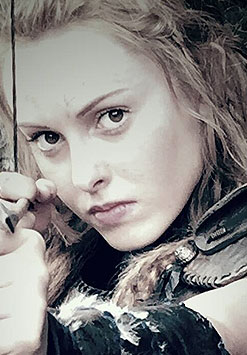