Pakistani-American stand-up comedian, actor, writer, and podcast host. Nanjiani is best known for being a main cast member on HBO’s Emmy Award-nominated series Silicon Valley, as well as for providing the voice of Prismo on the Emmy Award-winning animated series Adventure Time. He starred on the TNT series Franklin & Bash and the Adult Swim series Newsreaders. Nanjiani also co-hosted the Comedy Central show The Meltdown with Jonah and Kumail. In addition to his television and film work, he hosts two podcasts: The Indoor Kids and The X-Files Files.

In 2017, Nanjiani starred in the romantic comedy film The Big Sick, which he wrote with his wife Emily V. Gordon. 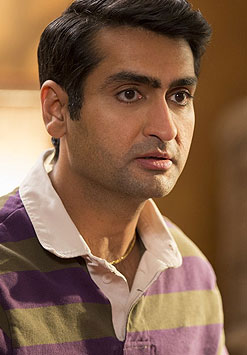