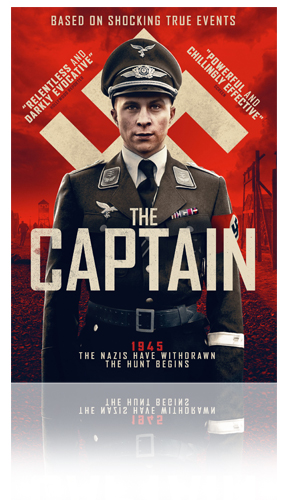 To celebrate the release of THE CAPTAIN on DVD and Digital HD on October 1, The Fan Carpet are giving you a chance to win a copy on DVD, courtesy of Signature Entertainment!

Based on the astonishing true story of Pvt. Willi Herold, a teenage deserter from the German army whose sadism would eventually earn him the nickname of the Executioner of Emsland, The Captain picks up two weeks before the end of the war. A petrified Herold, fleeing military police, finds a Nazi captain’s uniform to wear and avoid execution. Thus disguised, he soon rallies a ragtag band of brothers whose unquestioning acceptance of his command emboldens him. High on the terrifying charisma of his clothing, he invents a secret mission from the Fu?hrer and embarks on a brutal odyssey of torture and slaughter.