Win Andre The Giant on DVD! 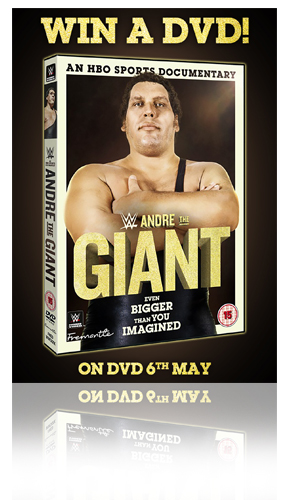 To celebrate the DVD release of Andre The Giant (available to buy from Monday 6th May) - we are giving away a DVD to one lucky winner!

The incredible HBO documentary on the life and career of larger-than-life wrestling legend, Andre the Giant – plus a selection of classic matchups from “The Eighth Wonder of the World”!

At a 7’4” and 520lbs, Andre the Giant was one of the most legendary superstars in the history of sports-entertainment – and this documentary gets you closer than ever to the man behind the giant!

Using rare and never-before-seen photos and archive footage, it’s a gripping insight into how Andre was drawn to – and ultimately changed – the world of professional wrestling and became a HUGE name in Hollywood.

The documentary is packed with candid stories about Andre from the people who knew him best. And the real Andre proves to be as much of a legend as his WWE persona!

There’s also vintage wrestling action in a selection of matches, including the rarely seen and near mythic collision with Hulk Hogan in Shea Stadium, his Bodyslam Challenge match against Big John Studd at the first ever WrestleMania, and facing Hulk Hogan again – this time for the WWE Championship – at WrestleMania III, a match and moment that would change sports-entertainment forever!

Open to UK participants only