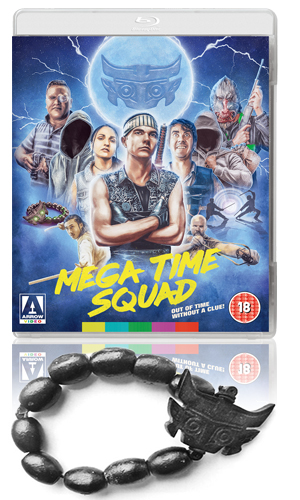 To celebrate the release of MEGA TIME SQUAD - available on Blu-ray 20th May from Arrow Video - we're giving away a Blu-ray and limited edition time-travel bracelet merchandise!

Tim van Dammen directs this 80s-throwback supernatural crime caper, dubbed by critics as “a grounded sci-fi mini-odyssey with lots of creativity and even more laugh-out-loud gags”, in which a brilliant ensemble works with sharp dialogue to deliver an endearingly odd and endlessly entertaining slice of Kiwi life.

Welcome to Thames, New Zealand. Population: 7,518 – and falling. Unless of course you’re Johnny (Anton Tennet), the new member of a local gang led by Shelton (Jonathan Brugh, What We Do in the Shadows). He’s multiplying. After Johnny is foiled in an effort to double-cross Shelton at his own game of masterminding the sleepy town’s unsurprisingly tame criminal underbelly, he inadvertently steals an ancient bracelet with which he can turn back time – and in the process create multiple clones of himself. This gives Johnny the ability to literally form his own gang against Shelton’s. The only problem is: how can you learn to live your best life, when you’re also having to figure out which one of you exactly that is? Oh, that and there’s a demon after him for bending the rules of time, physics and just general common sense.

MEGA TIME SQUAD IS OUT NOW

-The Editor\'s decision is final and binding on the entrants. No correspondence will be entered into