Win Premiere Tickets to the London Premiere of 21 MILES! 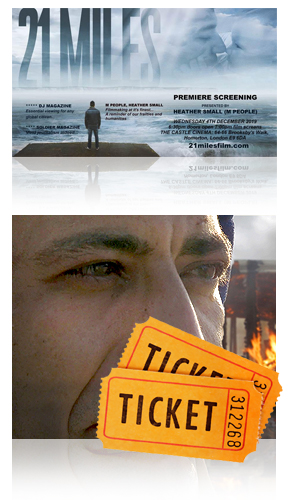 To celebrate the release of 21 MILES, The Fan Carpet are giving you the chance to win tickets to the London Premiere on December 4, courtesy of Bite Films!

Coldplay’s Dave Holmes and Phil Harvey said “21 MILES is a moving and important film. Through the heart-breaking story of a Tunisian man trying to reach his son in the UK, the documentary shines a light on the everyday struggles of migrants and refugees desperate to escape impossible situations.”

A father’s incredible journey to reach his son in England. Kais arrives in the Jungle, a French shantytown with nothing more than the shirt on his back. 21 miles of sea lie between him and his 8-year old boy Marcel.

This is the story of one man’s battle to get to his son, the longing for a dream and its juxtaposition with the misery of the migrant situation. It tells of the human costs of political failings, rising nationalism, immigrant phobia and the sheer scale of people seeking a better life elsewhere.

From Director Richard Parry (Shooting Robert King, BASE) and Exec-Produced by Coldplay’s manager Dave Holmes and creative director Phil Harvey - a feature documentary. Along with the involvement and support from Coldplay’s management team, the film features the band’s music, including ‘Daddy’ - a track from their latest album ‘Everyday Life’. The film was Co-produced and Music Supervised by Lol Hammond (Football Factory, Bronson, Sweeny, Monsters).

On off are a pair (2) tickets for the London Premiere of 21 MILES.

No Alternative prize is offered.