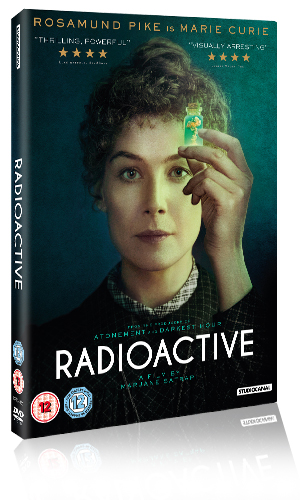 To celebrate the DVD release of RADIOACTIVE on DVD on July 27, The Fan Carpet have teamed with StudioCanal to give you a chance to win a copy of the film on DVD!

In the male-dominated society of late 19th century Paris, Marie is a fiercely passionate scientist, who struggles to progress her ground-breaking research, despite her obvious brilliance. After joining forces with fellow scientist and future husband, Pierre Curie, they take her exploration of radioactivity forward, discovering not one, but two new elements: radium and polonium. The genius of the Curies’ discoveries and the ensuing Nobel prize propels the devoted couple into the international limelight. But after a tragic accident Marie must continue to advance her work alone resulting in revolutionary discoveries that have dramatic consequences for the modern world.

From the 1870s to the modern era, RADIOACTIVE is a journey through Marie Curie’s enduring legacies – her passionate relationships, scientific breakthroughs, and the consequences that followed for her and for the world. After meeting fellow scientist Pierre Curie (Sam Riley), the pair marry and change the face of science forever by their discovery of radioactivity. The genius of the Curie's world-changing discoveries and the ensuing Nobel Prize propels the couple into the international limelight. From the producers of ATONEMENT and DARKEST HOUR and Academy Award® nominated director Marjane Satrapi (PERSEPOLIS) comes a bold, visionary depiction of the transformative effects and ensuing fallout of the Curie’s work and how this shaped the 20th Century.

MARIE CURIE FACTS
Marie Curie is recognized throughout the world not only for her ground-breaking Nobel Prize- winning discoveries but, as explored in RADIOACTIVE, for also for having boldly broken many gender barriers during her lifetime.

• After becoming the first woman to be granted a Nobel Prize, Curie later became the first person to earn a second one. In 1911, she received her second of the prestigious award - in chemistry this time - for her isolation of radium.

• Curie and Pierre conducted the bulk of the research and experimentation which led to the discovery of the elements Radium and Polonium in what was described by the respected German chemist, Wilhelm Ostwald, as “a cross between a stable and a potato shed.” In fact, when he was first shown the premises, he assumed that it was “a practical joke.”

• By 1925, Curie’s daughter Ire?ne received her doctorate, having joined her mother in the field of the study of radioactivity. Ten years later, she and her husband, Fre?de?ric, were jointly awarded the Nobel Prize in Chemistry for the breakthroughs they had made in the synthesis of new radioactive elements.

• Following her husband’s tragic death in a 1906 accident, Marie was appointed to Pierre’s seat at the Sorbonne, making her the university’s first female professor. Just three years earlier, she had been the first woman in France to earn a doctorate.

• In 1995 the remains of Curie and her husband were enshrined in Paris’ Pantheon, a mausoleum reserved for distinguished French thinkers. She became the second woman to receive this honor and the first to earn it through her own achievements. Among her writing, Curie left behind this thought: "Nothing in life is to be feared, it is only to be understood. Now is the time to understand more, so that we may fear less.