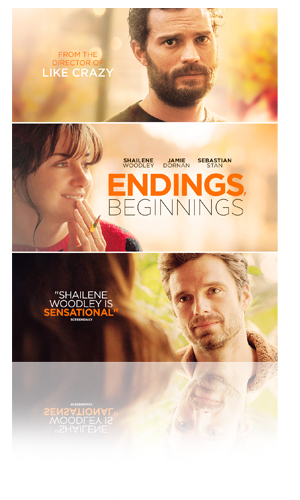 To celebrate the release of ENDINGS, BEGINNINGS, OUT NOW on Digital HD, The Fan Carpet have teamed with Signature Entertainment to give away 3 iTunes codes for the film!

From the acclaimed director of Like Crazy, Drake Doremus ENDINGS, BEGINNINGS is a sincere and emotionally charged romantic drama with an all-star cast of Shailene Woodley (Big Little Lies, Adrift, Divergent), Jamie Dornan (Fifty Shades, A Private War) and Sebastian Stan (The Avengers, I, Tonya). Daphne (Woodley), a young woman recovering from a break-up is at a turning point in her life and embarks on a few months of self-introspection. But when she meets friends Jack (Dornan) and Frank (Stan) at a party, everything changes. Daphne becomes involved with both of them, starting a steamy and complicated love triangle. ENDINGS, BEGINNINGS also stars Matthew Gray Gubler (The Life Aquatic), Lindsay Sloane (Horrible Bosses) and Shamier Anderson (Wynonna Earp) directed by Drake Doremus and written by Drake Doremus with novelist Jardine Libaire.