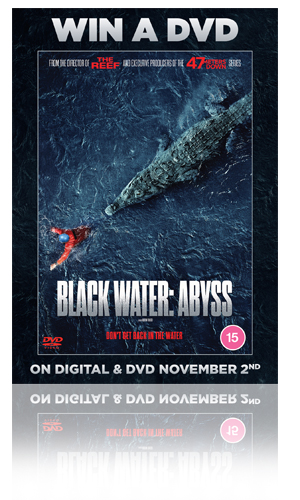 To celebrate the Digital and DVD release of Black Water: Abyss on November 2nd we are giving away a DVD copy.

Following its high profile UK and Irish cinema reopening release this Summer, the spine-tingling killer croc thriller BLACK WATER: ABYSS arrives to terrorise everyone at home as a digital download and DVD on 2nd November 2020.
BLACK WATER: ABYSS sees adventure-seeking couple Eric (Luke Mitchell AGENTS OF S.H.I.E.L.D.) and Jennifer (Jessica McNamee THE MEG) convincing their friends Yolanda (Amali Golden THE INVISIBLE MAN) and Viktor (Benjamin Hoetjes 10x10) to explore an uncharted cave system, in remote North Australia, with the help of the unpredictable Cash (Anthony J. Sharpe ROBERT THE BRUCE) as their guide.
As a tropical storm floods the caves the adventurers are trapped in the dark recesses underground, cut off from the outside world. As the waters rise they soon realise they aren’t alone, and their desperate attempt to escape turns into a frantic man and woman versus crocodile fight for survival.
BLACK WATER: ABYSS locks its jaws onto the viewer from the opening scene and doesn't let go. Fans of CRAWL, THE SHALLOWS and THE DESCENT will be sure to get their creature feature fix. Directed by Andrew Traucki, who made the original BLACK WATER, this standalone sequel is the perfect popcorn chomping, thrill-filled ride.
For your chance to win, answer the following question...

BLACK WATER: ABYSS WILL BE RELEASED ON DIGITAL DOWNLOAD AND DVD ON 2nd NOVEMBER 2020