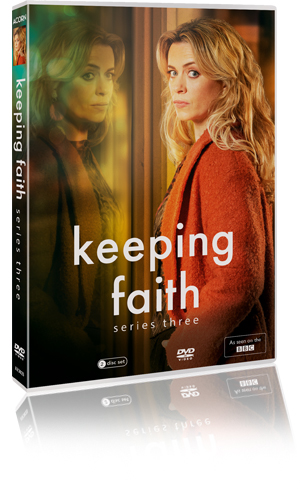 To celebrate the DVD release of KEEPING FAITH Series 3, The Fan Carpet are giving you the chance to win a copy of series 3!

Runaway success Keeping Faith starring Eve Myles is back, and this time her all-important jacket is orange. Series 3 arrived on DVD 3 May and we have 2 copies to give away courtesy of Acorn Media International. The Keeping Faith Complete Series 1 – 3 Box Set is also available to buy now.

In series one we meet tenacious lawyer, wife and mother Faith Howells who must deal with the disappearance of her husband Evan. Series two follows 18 months after Faith’s life was turned upside down and she is drawn into a new mystery, taking on the case of a local farmer accused of murdering her husband.

In its third instalment, we re­­-join Abercorran 18 months on from the explosive series two finale and Faith must now contend with Evan as their divorce and custody battle go from bad to worse, and where to go now following the fall out.

Faith tries to remain positive even as her world is crumbling around her – but someone from her past appears and threatens to disrupt the tentative peace Faith has started to find in her life.

Will Faith be able to cling on to the tenuous normality she’s constructed?