Win The Best of Wrestlemania Main Events On DVD! 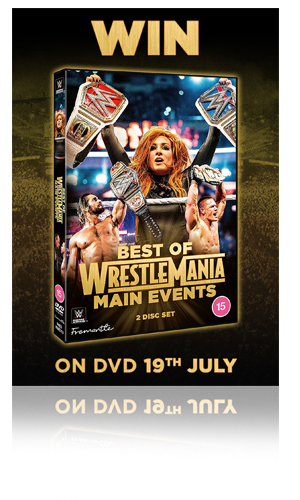 To celebrate the DVD release of Best of Wrestlemania Main Events we are giving away a copy to one lucky winner.

It's known as the Showcase of the Immortals for a reason. For 37 years the global spectacle known as WrestleMania has played host to some of the most memorable marquee matches, but none bigger than the main event! This 2-disc collection brings you the 10 best matches that have closed the event.

For long time fans this collection is a perfect trip down memory lane to remind you why each included WrestleMania main event really is unique unto itself and proved why it deserved to be the main event that year.

For potential newer fans, what you can expect is a tremendous showcase of legendary names battling with each other in a perfect time capsule of nearly 40 years of history.

From the height of WWE's Attitude Era at WrestleMania 17 when The Rock & Stone Cold Steve Austin duked it out, to one of the most iconic swansongs a WWE legend could ever ask for ten years later at WrestleMania 26 when Shawn Michaels battled the Undertaker.

The culmination of a movement that saw the WWE fans make it clear who they wanted to be in the main event, with Daniel Bryan fighting his way to battle Randy Orton and Batista at WrestleMania 30.

And to cap it off, the history making first women's WrestleMania main event at WrestleMania 35 that saw Becky Lynch, Charlotte Flair and MMA sensation turned WWE Superstar, Ronda Rousey battle it out for both the RAW & Smackdown Women's Championship in a winner take all encounter.

If there's one show wrestling fans the world over will always tell they will do their utmost not to miss every year, it's WrestleMania. This collection proves why that is and forever will be the case.

Best of Wrestlemania Main Events is available to buy on DVD from 19th July 2021.