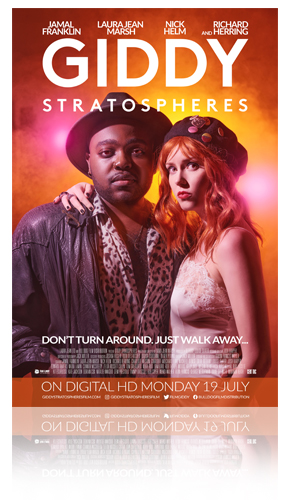 To celebrate the release of GIDDY STRATOSPHERES which will be available on digital download from the 19th July, we have a digital download copy up for grabs courtesy of Bulldog Film Distribution.

GIDDY STRATOSPHERES follows Daniel (Jamal Franklin) and Lara (Laura Jean Marsh), indie-kid soul mates in the centre of the storm of guitars and broken glass that was the 00's indie music scene. Beautiful, mischievous, dishevelled, and on a quest for the ultimate euphoria and excitement that comes with dancing and thrashing on the front row to your new favourite song by your new favourite band. They don't miss a gig. They don't miss a beat. But as the night draws to a close, a darkness looms in the shadows of the after party. And the next day Lara can’t quite work out why Daniel is so desperate for her to remember the events of the night before. Why is she in denial?

Set to a fantastic soundtrack, GIDDY STRATOSPHERES is the writing/directing debut of Laura Jean Marsh with a supporting cast including Nick Helm, Richard Herring, Bethany Slater, Charlotte Weston, Charlotte Milchard and a host of up-and-coming talent.

GIDDY STRATOSPHERES will be available to own and rent on Digital HD from Monday 19 July on all major platforms including Amazon Prime Video, iTunes, Google Play, Microsoft Films & TV and Sky Store.

You will be given a unique code to download GIDDY STRATOSPHERES and for details of how to redeem the code please visit: https://support.apple.com/en-gb/HT201209

Unique download code will expire 25 days after being supplied to you and will be redeemable only on the iTunes Store for the United Kingdom for the film GIDDY STRATOSPHERES. Requires an iTunes account, subject to prior acceptance of license and usage terms. To open an account you must be above the age of 13 and in the United Kingdom. Compatible software and hardware, and internet access (fees may apply) required. Not for resale. Films must be fully downloaded within 30 days of code redemption. Full terms and Apple’s Privacy Policy apply; see www.apple.com/legal/itunes/ww/ and www.apple.com/uk/privacy/. For more information, see www.apple.com/support/itunes/ww/. Competition prize provided to you by Bulldog Film Distribution.

-1 (one) winner will receive 1 (one) ‘GIDDY STRATOSPHERES’ digital download code.