Win The Rock - The Most Electrifying Man In Sports Entertainment on DVD! 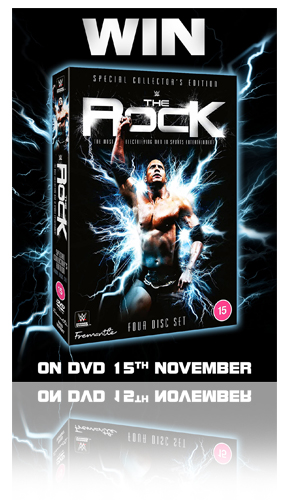 To celebrate the DVD release of WWE: The Rock - The Most Electrifying Man In Sports Entertainment we are giving away a DVD copy.

Finally, The Rock – a defining icon of The Attitude Era, one of the all-time great WWE Champions, and the biggest box-office star in the world – has come back to WWE DVD! The Rock: The Most Electrifying Man in Sports-Entertainment is a classic collection that charts The Rock’s epic WWE career, featuring all his greatest matches and moments. This all-new Special Edition version includes a bonus fourth disc with matches from 2011-2013. There’s over 11 hours of action as The Rock battles Stone Cold Steve Austin, Hulk Hogan, Triple H, Undertaker, Kurt Angle, Mankind, John Cena, and many, many more WWE Legends!

If you smell what The Rock is cooking!

Mankind © vs. The Rock

No DQ Match for the WWE Championship

The Rock vs. Hulk Hogan

Undertaker © vs. Kurt Angle vs. The Rock

The Rock © vs. John Cena

WWE: The Rock - The Most Electrifying Man In Sports Entertainment will be available to buy on DVD from 8th November - order your copy here.

- Open to UK participants only

- The promoter of this competition is The Fan Carpet Ltd