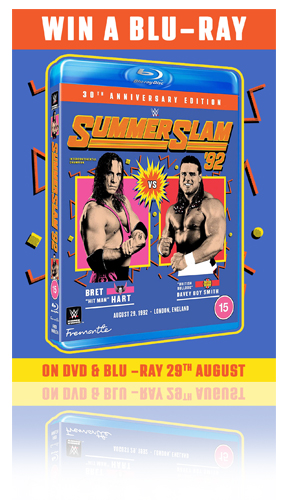 To celebrate the Blu-ray and DVD release of the amazing SummerSlam '92 - 30th Anniversary Edition we are giving away a Blu-ray copy.

RELIVE THE CLASSIC WWE EVENT HEADLINED BY THE BRITISH BULLDOG & BRET HART – REMASTERED & ON BLU-RAY FOR THE FIRST TIME!

SummerSlam 1992 is the biggest event in WWE’s long history in the UK, with more than 80,355 fans packed into Wembley Stadium and the biggest WWE match to ever take place on British soil – brothers-in-law Bret Hart and “The British Bulldog” Davey Boy Smith battling for the Intercontinental Championship – an intensely emotional, powerfully nostalgic main event.

As well as this incredible match, there are stacks of classic moments, including the Legion of Doom’s rip-roaring motorcycle entrance, the Macho Man defending his WWE Championship against the Ultimate Warrior, and the Undertaker arriving at Wembley in a hearse – plus, a once-in-a-lifetime atmosphere from the UK fans.

SummerSlam 1992 marked the peak of WWE’s wild popularity in the UK in the early 1990s – a time when WWE truly ruled Brittania. SummerSlam 1992 has now been remastered for DVD for the very first time and makes its Blu-ray debut.

The SummerSlam 1992 30th Anniversary Edition is also packed with special features, including three “dark” matches that were not broadcast at the time, a SummerSlam Countdown Show that is unavailable anywhere else, plus more Blu-ray exclusives.

SummerSlam '92 - 30th Anniversary Edition will be available to buy on Blu-ray and DVD from 29th August.

-The promoter of this competition is The Fan Carpet Ltd.