Win WWE: Clash at the Castle On Blu-ray! 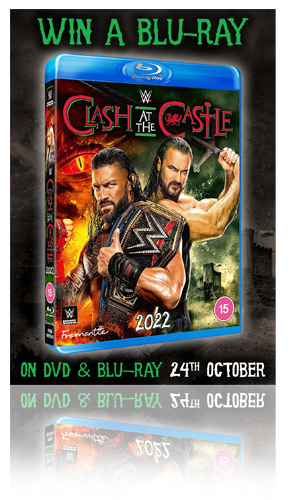 To celebrate the Blu-ray and DVD release of WWE: Clash at the Castle, we are giving away a Blu-ray copy.

WWE’s top Superstars descend on Cardiff for Clash at the Castle — the first major WWE event inside a UK stadium for 30 years! Homecoming hero Drew McIntyre challenges Undisputed Champion Roman Reigns in front of a fired-up crowd of 62,296 fans. Plus, more incredible action, an electric atmosphere, and an appearance from Tyson Fury!

Plus more action and surprises!

Clash at the Castle was history in the making – WWE’s first stadium show on UK soil since SummerSlam 1992 at Wembley. This time around, WWE takes over Principality Stadium in Cardiff, Wales. With more than 62,000 members of the WWE Universe in attendance, Clash at the Castle boasts a once-in-a-lifetime atmosphere!

In the main event, British Superstar Drew McIntyre challenges Roman Reigns for the Undisputed WWE Universal Championship. Can Drew repeat the success of the legendary British Bulldog at SummerSlam 1992 and leave with the gold? It’s a furious, gripping matchup — including a cameo from boxing champion Tyson Fury at ringside!

WWE: Clash at the Castle is available to buy on Blu-ray and DVD now.

- Open to UK participants only