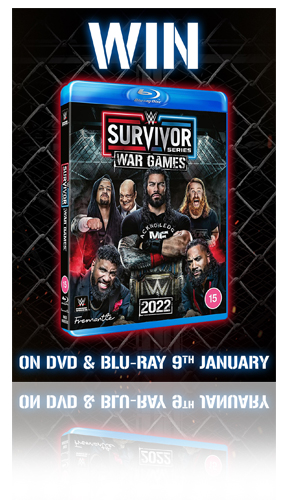 To celebrate the Blu-ray and DVD release of Survivor Series: War Games 2022, we are giving away a Blu-ray copy.

Survivor Series returns! But this time there’s a twist – the Survivor Series debut of WarGames, one of the most brutal constructions in wrestling history! Teams of five collide in two rings, surrounded by an unforgiving steel cage! And the match doesn’t begin until every member of the team enters! It’s mayhem, carnage, and a fight for survival as Roman Reigns leads the Bloodline against Drew McIntyre’s Brawling Brutes!

Triple Threat Match for the US Championship

Survivor Series is one of the biggest events in the WWE calendar. Over 35 years, it’s hosted some of the most important matches and moments in WWE history. But this year’s event is unlike any Survivor Series you’ve ever seen before. Because this year’s Survivor Series puts the Superstars of RAW and SmackDown inside WarGames for the very first time!

As Roman Reigns leads the Bloodline against Drew McIntyre’s team, there’s one big question on everyone’s lips: will Sami Zayn stay loyal to the Bloodline or side with his long-time best friend, Kevin Owens? What plays out is the most gripping conclusion to a WWE event in 2022!

Elsewhere, AJ Styles faces off against Finn Bálor, with the OC and Judgment Day in their respective corners. Seth Rollins also defends his United States Championship in a thrilling Triple Threat – a match that had fans talking all across the WWE Universe!

There’s also a special bonus feature on the Blu-ray edition, which includes the Survivor Series: WarGames press conference! Don’t all this and more!