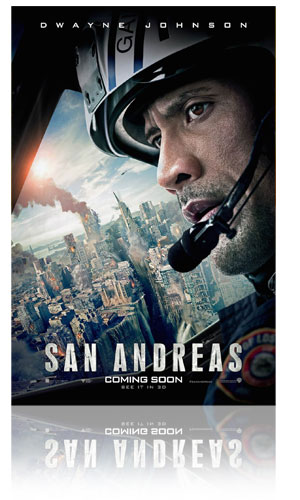 Get ready for SAN ANDREAS, the upcoming action blockbuster starring Dwayne Johnson, arriving in cinemas May 28th. To celebrate the release, we’re giving you the chance to win a set of merchandise, including: Key Tag, Whistle, ID holder, Men’s Navy Tee and Mesh Hat.

After the infamous San Andreas Fault finally gives, triggering a magnitude 9 earthquake in California, a search and rescue helicopter pilot (Dwayne Johnson) and his estranged wife make their way together from Los Angeles to San Francisco to save their only daughter. But their treacherous journey north is only the beginning.  And when they think the worst may be over…it’s just getting started.

SAN ANDREAS IS IN CINEMAS MAY 28

Simply answer the question below and you could win a SAN ANDREAS merchandise bundle...

• Competition will close on June 27th. • Open to UK residents only. • Three (3) winners will each receive: Key Tag, Whistle, ID holder, Men’s Navy Tee and Mesh Hat. • Fan Carpet is the competition promoter. • Winners will be picked at random and contacted by the site. The prize will be delivered to the winner within 28 days of confirmation of delivery address • The Editor's decision is final and binding on the entrants. No correspondence will be entered into • Prize winners may be required to take part in reasonable post-competition publicity for Warner and may be filmed, photographed or otherwise recorded by Warner or other third parties for publicity and he/she consents to the use of his/her personal data for such purposes • Prize winners may be required to sign a Prize Acceptance Form before the Prize is awarded. If a Prize winner is under the age of 18 years, a parent or guardian may be required to sign a Prize Acceptance Form before the Prize is awarded • There is no cash alternative to Prizes which are subject to availability, non-transferable, non-negotiable and non-refundable. Prizes may not be sold, offered for sale or used in connection with any other competition or promotion by the Prize winner • Prize details are correct at the date of this Agreement. Events may occur that render the Media Promotion itself or the awarding of Prizes impossible due to unforeseen circumstances or reasons beyond the control of Warner. In this situation, Warner may at its discretion vary or amend Prizes so as to provide reasonable alternative Prizes and Prize winners agree that no liability shall attach to Warner or parties connected to Warner as a result