FrightFest Halloween All-Dayer: A Conversation with Carlo Mirabella-Davis for SWALLOW | The Fan Carpet

FrightFest Halloween All-Dayer: A Conversation with Carlo Mirabella-Davis for SWALLOW

Hunter, a newly pregnant housewife, finds herself increasingly compelled to consume dangerous objects. As her husband and his family tighten their control over her life, she must confront the dark secret behind her new obsession.

Ahead of the UK premiere of SWALLOW at Arrow Video FrightFest Halloween, director Carlo Mirabella-Davis reflects on the personal inspiration behind his debut feature, healing psychological wounds and his empathy for the horror genre.

SWALLOW is your directorial debut. How difficult was it to get the project off the ground?

Getting a film made is a fascinating process. My late, great teacher at NYU, Bill Reilly, would always say “script is coin of the realm”. The early stages involved perfecting the screenplay as much as I could, writing and rewriting until I felt confident sending it out.

The sacred bond between the producer and the director is the catalyst that brings a film into being. I asked my colleague who the best independent producers in the business were, and she said, “Mollye Asher and Mynette Louie, but you’ll never get them”.

I watched their films and was floored by how incredible they all were. As luck would have it, both Mollye and Mynette decided to work on the film. Amazing, inspiring, driven producers like Mollye and Mynette will support your vision, collaborate with you, and fight passionately to bring that vision to the world. Once we had the finished script and our team, we brought on an amazing casting director, Allison Twardziak, and we cast the lead roles of the film. We were incredibly lucky to have the brilliant Haley Bennett come on board as Hunter, and once she joined the production, along with the marvellous Austin Stowell, I knew we had a powerful film on our hands.

Raising the money was a bit of a challenge in the United States because independent film studios often don’t want to take a chance on a first-time director. Through Sundance Catalyst, we raised some money in the United States, but the bulk of the financing came from France, from our incredible investors Charades and Logical who took a chance on an unusual script, and I’m so glad they did, because they were absolutely wonderful to work with.

Haley Bennett is outstanding in the film as Hunter. How did you cast her?

We were so incredibly fortunate Haley Bennett accepted our offer to play the role of Hunter. She’s a profoundly brilliant actor, collaborator, and artist who delivers a tour-de-force performance in the movie. I’d seen Haley in Girl on a Train and was deeply impressed, so we made an offer and thankfully she accepted. Haley has a remarkable ability to evoke different layers of emotion simultaneously. She wears many masks throughout the film, layered on top of each other and she can convey all those layers of emotion, all those masks, simultaneously in just the twitch of her eye or the way Hunter fixes her hair. Haley was also an executive producer on the film and very devoted to the project. I got so incredibly fortunate that someone as committed, empathic, and imaginative as her brought Hunter to life with such specificity, authenticity, and heart.

Haley’s character suffers from a condition called Pica, an eating disorder that involves swallowing progressively dangerous non-food objects. What drew your attention to that particular illness?

I remember seeing a photo of all the contents removed from the stomach of a patient with pica, all these objects spread out like an archaeological dig. I wanted to know what drew the patient to those artifacts. It seemed like something mystical, almost like a holy communion, and I wanted to know more. I got in touch with the world‘s leading expert on pica, Doctor Rachel Bryant-Waugh, and she was kind enough to read the script and be a consultant on our film. Although pica is a relatively obscure condition, I felt it could be representative of any rituals of control, any reaction to a difficult situation, any obsessive behavior, and therefore, universal.

The film revolves around issues of control, repression and identity. How autobiographical is the story?

The film was inspired by my grandmother, Edith Mirabella, a homemaker in the 1950s in an unhappy marriage who developed various rituals of control. She was an obsessive handwasher who would go through four bars of soap a day and twelve bottles of sanitizing alcohol a week. I think she was looking for order in a life she felt increasingly powerless in. My grandfather at the behest of the doctors, put her into a mental institution where she received electroshock therapy, insulin shock therapy, and a non-consensual lobotomy which resulted in the loss of her sense of taste and smell. I always felt there was something punitive about how my grandmother was treated, that she was being punished for not living up to society’s expectations of what they felt a wife and a mother should be. I wanted to make the movie to show my grandmother, wherever she is, that her suffering did not go unnoticed. So much suffering goes unnoticed in our world today, and I think through the power of cinema we can increase empathy, fight prejudice, and heal psychological wounds. 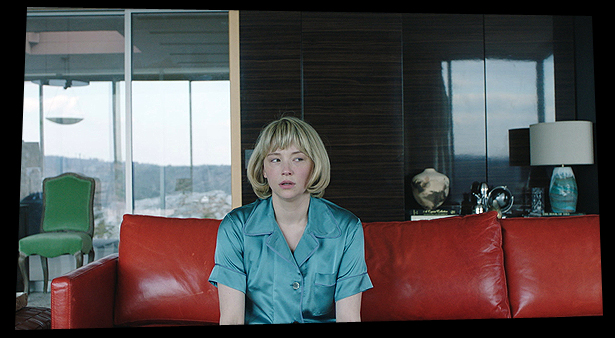 SWALLOW is beautifully shot, creating a sharp, clinical edge that makes the luxurious world Hunter inhabits somehow fraught with danger. Tell us how you approached the design and look of the film?

So thrilled you feel that way! I was extremely fortunate to have an incredible, imaginative, devoted design team. Our visionary cinematographer, Kate Arizmendi, our inspired production designer, Erin Magill, and our amazing costume designer, Liene Dobraja, evoked Hunter’s world with such detail and subtext. In order to Illustrate Hunter’s psychological movement, Kate and I developed a rigid visual vernacular, a strict set of camera direction rules that we broke at key emotional moments. Kate had the idea to shoot the film with Master Prime lenses because, as she put it, “Pica is all about textures”, and the Master Primes allowed her to illustrate the textures of Hunter’s world in mystical detail. In a film that’s all about little objects and the tyranny of environments, Erin Magill brought such specificity of space and vibrant color to Hunter’s world. And Liene, who is so good with expressing the characters’ inner cosmology through what they wear, created a wonderful wardrobe journey for Hunter. We wanted Swallow to take place in a stylized world that became more and more realistic as the film progressed in order to reflect Hunter’s growing psychological clarity. Like a perfect pane of glass with a crack slowly forming in it.

Research has shown that more children are swallowing objects than ever before and that adult cases are on the rise too. Why do you think that is?

Interesting question. We are living in a world that is becoming increasingly chaotic and because of that, I think rituals of control are on the rise.

While I’m not a mental health professional, I believe OCD, eating disorders, cutting, all these rituals of control can often be related to past trauma or situations that people feel powerless in. We very much consider Swallow to be a feminist film, and in America, there’s no denying that a certain kind of old-world patriarchy has become newly emboldened.

With the Trump presidency, we’ve seen a reinforcing of patriarchal paradigms, a silencing of dissenting voices, and a rollback of reproductive rights.

We are also fortunate to be living in a time where there are many powerful new voices and activists fighting back; more films directed by female filmmakers, and more films with female main characters that explore these issues. I hope Swallow is one of those voices of change, and I hope it raises awareness and makes people feel seen and less alone.

Do you think horror films can help us deal with and understand troubling and mentally-challenging issues?

I do. Fear is the oldest emotion, the first emotion. To paraphrase Rainer Werner Fassbinder, “Fear eats the soul”. I think horror movies are a powerful tool which allows viewers to manifest their fears in a safe environment, a communal environment. Once those fears are manifested on the crucible of the screen, they can be experienced and processed in a way that facilitates catharsis for the viewer, providing a greater understanding of what they’re frightened of and why. Once we understand our fears and what drives them, we can emancipate ourselves from a cycle of terror and anxiety. We are fortunate to be in a new renaissance of horror with incredible, personal, socially relevant films like Get Out, Babadook, and Hereditary. Because horror is a genre that is inherently extreme and uncomfortable, I do agree that horror has the hardwired capacity to take on challenging topics. As a lifelong horror fan, I truly believe that powerful, thoughtful horror movies can change the world for the better.

Do you have an affinity to the genre?

Yes! I’ve been horror fan my entire life. When I was six years old, I begged my parents to rent a horror movie for my birthday, and they obliged with a delightful screening of The Blob. Swallow has many little horror film references within it. For example, when Hunter puts the red gels on the window, another Erin Magill innovation, it’s a direct homage to the glorious colors in Argento’s 1977 Suspiria. My fantastic, passionate, inspiring editor, Joe Murphy, and I, bonded over our mutual love of unusual, obscure, art horror films.

Finally, we hear your next film is going to be a supernatural horror. Can you reveal a few details?

I’m working on a feminist supernatural horror movie, among other scripts, but I can’t reveal the contents at this time. 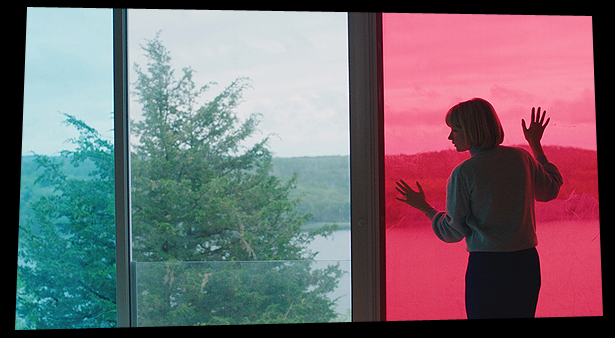 SWALLOW is screening at 6.15pm at Cineworld, Leicester Sq. on Sat 2 Nov, as part of the Arrow Video FrightFest Halloween all-dayer.