“Nothing short of perfection…truly remarkable film” 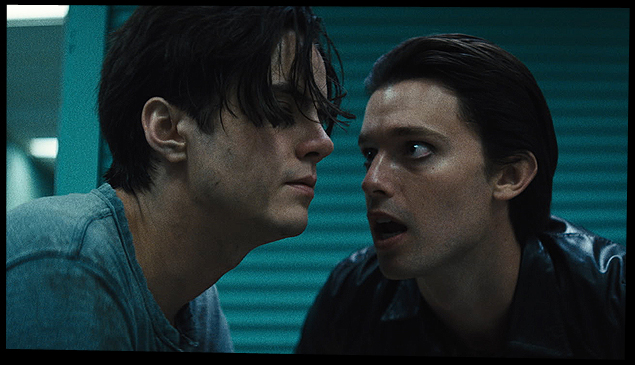 Having received high critical praise across its film festival run, DANIEL ISN’T REAL is based on the novel “In This Way I Was Saved” by Brian DeLeeuw with the screenplay by Brian DeLeeuw and Adam Egypt Mortimer and produced by Daniel Noah, Josh C. Waller, Lisa Whalen, Elijah Wood with Spectrevision and ACE Pictures.

The film follows troubled Luke (Miles Robbins) who suffers a violent family trauma and resurrects his childhood imaginary friend to help him cope. Charismatic and full of manic energy, “Daniel” (Patrick Schwarzenegger) helps Luke to achieve his dreams, before pushing him into a desperate fight for his own soul.

Director Adam Egypt Mortimer said “Over the seven years Brian and I worked on adapting his novel, different themes emerged — particularly through the seductive character of Daniel. His nihilistic point of view made me want to make the sort of movie that would wake people up to the danger of reality and thrill them with the scary idea that people are all one impulsive decision away from violence or true evil.

Within all the technique, colours, stunt, and psychotronic moments, the best part of the movie is the emotional reality between the characters. DANIEL ISN’T REAL is my heart put on film. And I can't wait to have a public conversation about it with you all!”

ABOUT ARROW FILMS
Arrow Films is a leading independent all-rights entertainments company, established in 1991, operating in the UK, Republic of Ireland, U.S.A and Canada. Arrow Films is firmly dedicated to new cinema, developing an enviable slate of critically acclaimed films which will additionally enjoy a lasting lifespan across all of our ancillary channels, brands and labels, including Arrow Video and Arrow Academy.

Recent acquisitions include Harpoon, Aniara, Mega Time Squad, Lords of Chaos, Climax, The Endless, Blade of the Immortal, The Villainess, Aquarius and Hounds of Love. Additionally, Arrow Films is widely considered to be the global market leader in the Premium Home Entertainment market, fuelled by state-of-the-art in-house film restoration and highly sought-after Blu-ray editions of classic and cult cinema.

ADAM EGYPT MORTIMER (Director / Co-Screenwriter)
While living in New York, Adam Egypt Mortimer played electric sitar in the subways and explored various forms of visual art. Shortly after graduating, he gave away all his musical instruments and moved to Los Angeles to become a filmmaker.

Adam was one of the directors on the anthology horror film HOLIDAYS, which opened the 2016 Tribeca Film Festival’s midnight section. Other directors on the project included Kevin Smith, Gary Shore, and Sarah Adina Smith. His first feature, 2015’s SOME KIND OF HATE, was called “The next contemporary horror classic” by Fangoria. After a run of top genre festivals, it was released theatrically and on home video by RLJ/Image Entertainment. 2015 also saw the release of his acclaimed graphic novel Ballistic, with art by Darick Robertson, published by Steve Niles’ Black Mask Studios. The graphic novel was praised by reviewers, including USA Today and Ain’t It Cool News, and was called “The Best Comic of The Year” by several writers.

PATRICK SCHWARZENEGGER (Daniel)
Schwarzenegger is a graduate of the University of Southern California with degrees in Cinematic Arts and Business.

Audiences will next see Schwarzenegger star in the supernatural thriller Daniel Isn’t Real alongside Sasha Lane, Miles Robbins, and Hannah Marks. The film is based on the novel This Way I Was Saved by Brian DeLeeuw, who co-wrote the script with writer/director Adam Egypt Mortimer. The film will be released in theatres and VOD later this year by Samuel Goldwyn Films and Shudder.

Schwarzenegger recently wrapped filming the Sci-Fi thriller Warning directed by Agata Alexander and the film is based on an original screenplay by Alexander, Rob Michaelson and Jason Kaye.

Recent credits include Open Roads film Midnight Sun where he starred opposite Bella Thorne and received an individual nomination for Choice Drama Movie Actor for the Teen Choice Awards. He also appeared in National Geographic’s historical series The Long Road Home which received a nomination for Best Limited Series for the Critics’ Choice Television Awards.

Additional credits include Stuck In Love opposite Greg Kinnear and Jennifer Connelly and Grown Ups 2, Dear Eleanor, and Scout’s Guide to the Zombie Apocalypse and on the small screen in Ryan Murphy’s Scream Queens.

Schwarzenegger is actively involved with multiple charity organizations which include Best Buddies, Special Olympics and Move for Minds. He is also involved in multiple business ventures and is co-founder of Blaze Pizza, Rumble Boxing and Cubcoat’s.

MILES ROBBINS (Luke)
Miles plays the role of "Luke" in Spectrevision's independent film, DANIEL ISN'T REAL opposite Patrick Schwarzenegger and Sasha Lane which premiered at the 2019 SXSW film festival. He won “Best Actor” at the 2019 Sitges International Film Festival for his portrayal of the role. Miles will next be seen in the Netflix feature, LET IT SNOW opposite Isabela Merced and Shameik Moore, directed by Luke Snelin. He can also be seen in THE DAY SHALL COME, directed by Chris Morris, which also premiered at the 2019 SXSW film festival. Last fall, Miles played a supporting role in HALLOWEEN for Universal/ Blumhouse, directed by David Gordon Green. He previously shot a supporting role in the Universal studio feature, BLOCKERS opposite Leslie Mann and John Cena, produced by Point Grey and Good Universe. On the animation side, Miles will voice the lead role of "Reid" in the feature, SUPERCHARGED! opposite Yara Shahidi. Independent film credits include a supporting role in HIGH RESOLUTION directed by Jason Lester as well as MY FRIEND DAHMER, based on the best-selling graphic novel of the same name which premiered at the 2017 Tribeca Film Festival. On the TV side, he will be seen in season 2 of MIRACLE WORKERS and previously starred in the recurring role of "William", the long-lost son of Scully and Mulder on FOX’s, THE X-FILES. Other TV credits include THE GET DOWN as well as the recurring role of "Erase Face” in MOZART IN THE JUNGLE. Off screen, Miles leads the New York based Pow Pow Family Band. The group's first record debuted last year along with their first national tour.

SASHA LANE (Cassie)
Sasha Lane is an actress from Houston, Texas. She has gone on to work on Desiree Akhavan's THE MAKING OF CAMERON POST, Brett Haley's HEARTS BEAT LOUD, and Neil Marshall's HELLBOY: RISE OF THE BLOOD QUEEN. Upcoming projects include Adam Egypt-Mortimer's DANIEL ISN'T REAL and UTOPIA for Amazon Studios.

Lane will next be seen in Neil Marshall's reboot of HELLBOY, opposite David Harbour and Milla Jovovich. The reboot is an update in which Hellboy returns as an immensely powerful demon who works for the government’s Bureau for Paranormal Research and Defense. Assigned a mission in London, where the ancient spirit of an evil witch has come back from the dead, he’s caught between the worlds of the supernatural and human as he battles the sorceress. Lionsgate is set to release the film on April 12, 2019.

Upcoming, Lane has in Adam Egypt Mortimer’s DANIEL ISN’T REAL, alongside Patrick Schwarzenegger and Miles Robbins. The film follows troubled college freshman Luke (Robbins) who suffers a violent family trauma and resurrects his childhood imaginary friend Daniel (Schwarzenegger) to help him cope. Charismatic and full of manic energy, Daniel helps Luke achieve his dreams, before pushing him to the very edge of sanity and into a desperate struggle for control of his mind. The film made its debut at South by Southwest Film Festival in 2019. Recently, Lane completed lensing on SHOPLIFTERS OF THE WORLD UNITE, written and directed by Stephen Kijak. The story chronicles the day when The Smith’s lead singer Morrissey announced that the band was officially breaking up. Distraught with the news and filled with sadness, a young boy takes a gun to the KISS 101 radio tower and demands that the DJ (portrayed by Joe Manganiello) play The Smiths for the entire night.

Lane is currently in production on Gillian Flynn’s “Utopia,” starring as ‘Jessica Hyde.’ Utopia follows a group of young adults who meet online that are mercilessly hunted by a shadowy deep state organization after they come into possession of a near-mythical cult underground graphic novel. Within the comic’s pages, they discover the conspiracy theories that may actually be real and are forced into the dangerous, unique and ironic
position of saving the world. Tough and feral after a life on the run from a mysterious and dangerous group, Jessica believes all the answers about her perplexing life story may be hidden in the graphic novel ‘Utopia.’ Amazon is set to launch the series Fall 2019.

In 2018, Lane was seen in Brett Haley’s HEARTS BEAT LOUD, opposite Nick Offerman and Kiersey Clemons. The film is set in the hip Brooklyn neighborhood of Red Hook and follows single dad and record store owner Frank, who is preparing to send his hard- working daughter Sam off to college while being forced to close his vintage shop. Hoping to stay connected through their shared musical passions, Frank urges Sam to turn their weekly jam sessions into a father-daughter live act. After their first song becomes an internet breakout, the two embark on a journey of love, growing up and musical discovery. Additionally, Lane previously starred in Desiree Akhavan’s coming of age film, THE MISEDUCATION OF CAMERON POST, with an ensemble cast featuring Chloë Grace Moretz, John Gallagher Jr. and Forrest Goodluck. The film premiered to critical and audience acclaim at the 2018 Sundance Film Festival, where it won the top U.S. Dramatic Grand Jury Prize. Based on the celebrated novel by Emily M. Danforth, THE MISEDUCATION OF CAMERON POST follows the titular character (Moretz) as she is sent to a gay conversion therapy center after getting caught with another girl in the back seat of a car on prom night. Run by the strict and severe Dr. Lydia Marsh (Ehle) and her brother, Reverend Rick (Gallagher Jr.), the center is built upon repenting for same sex attraction. In the face of intolerance and denial, Cameron meets a group of fellow sinners including the amputee stoner Jane (Lane), and her friend, the Lakota Two-Spirit, Adam (Goodluck).

In 2016, Lane was launched from obscurity into the spotlight with her starring role in Academy Award winning director Andrea Arnold’s AMERICAN HONEY. After being discovered by Arnold on a beach during Spring Break, Lane left college to take on the leading role of ‘Tar,' opposite Shia LaBeouf and Riley Keough. AMERICAN HONEY garnered international praise and went on to win the Grand Jury Prize at Cannes in 2016. For her portrayal, Lane was honored with the Best Actress Award at the 2016 British Independent Film Awards and garnered a Film Independent Spirit Award nomination as well as a Gotham Awards nomination.

Film credits include Hannah Marks and Joey Powers’ AFTER EVERYTHING, starring Jeremy Allen White and Maika Monroe. The dramatic comedy follows a young couple’s relationship that quickly develops when one of them is diagnosed with a life changing illness.