Anti-Worlds Announce PENNY SLINGER: OUT OF THE SHADOWS + BEST BEFORE DEATH + KRABI 2562 In Second Wave Of Blu-Rays For September 28 | The Fan Carpet

Anti-Worlds Announce PENNY SLINGER: OUT OF THE SHADOWS + BEST BEFORE DEATH + KRABI 2562 In Second Wave Of Blu-Rays For September 28

PENNY SLINGER: OUT OF THE SHADOWS, BEST BEFORE DEATH & KRABI 2562

On 28 September 2020, Anti-Worlds returns with a second wave of Blu-rays – all of them world premieres – dedicated once more to some of the most challenging and innovative filmmaking happening today. This latest trio of releases encompasses two documentary portraits devoted to a pair of fiercely individual British artists – Richard Kovitch’s PENNY SLINGER: OUT OF THE SHADOWS and Paul Duane’s BEST BEFORE DEATH, which follows Bill Drummond on his World Tour – and KRABI 2562, a collaboration between Ben Rivers (Two Years at Sea) and Anocha Suwichakornpong (Mundane History), born out of the Thai Biennale, that occupies a fluid space between fact and fiction.

Produced in close collaboration with the filmmakers, Anti-Worlds Limited Edition Blu-rays boast high-quality presentations and are complemented by extensive bonus content – including director commentaries, interviews, short films, deleted scenes, and more – as well as exclusive booklets. By showcasing such daring and exciting work with these definitive editions, Anti-Worlds hopes to surprise and delight in equal measure.

September’s releases are now available to pre-order individually or in a time-limited bundle offer with a 10% discount. If you wish to take advantage of the offer, just add all three new-release titles to your cart and enter the code BUNDLE at the checkout.

To pre-order and for further information visit Anti-Worlds Releasing.

PENNY SLINGER: OUT OF THE SHADOWS

The incredible, untold story of the British artist Penny Slinger and the traumatic events that led to the creation of her masterpiece, the 1977 photo-romance, An Exorcism.

Coming of age against a backdrop of post-war austerity and the subsequent explosion of colour that characterised the 1960s counterculture, Slinger embraced her generation’s quest for personal freedom and sexual liberation, and channelled these desires into her ground-breaking collages, sculptures, and films (including collaborations with Jane Arden and Peter Whitehead). So powerful was her vision that fifty years later her work is still influencing contemporary artists.

Since 2014, he’s been on a World Tour, travelling around the world with his show – The 25 Paintings – visiting a different city each year. In December 2016, he based himself in Kolkata, while in the Spring of 2018, he was in Lexington, North Carolina.

In each place, he carries out his regular work, setting up a shoeshine stand in the street or building a bed in order to give it away.

He walks across the longest bridge he can find, banging his parade drum at dawn, starts knitting circles with anyone who wants to join him, bakes cakes and offers them to strangers whose houses sit on a circle he’s drawn on a map of the city.

He’s not rich, and he’s deliberately designed his actions so they cannot be monetised. He’s mostly been ignored by the art world. So what is he doing it all for? Director Paul Duane shadowed Bill Drummond for three years before starting this film in order to achieve some level of understanding of what he’s about. Co-produced by Grammy Award-winning writer Robert Gordon and shot by Oscar-nominated DOP Robbie Ryan, the documentary is a fascinating look at an uncompromising artist.

Best Before Death is named after Drummond’s belief that the World Tour, scheduled to end when he’s 72, is a race against his own mortality.

It’s a film about life, death, art, money, music, and cake. And some knitting. 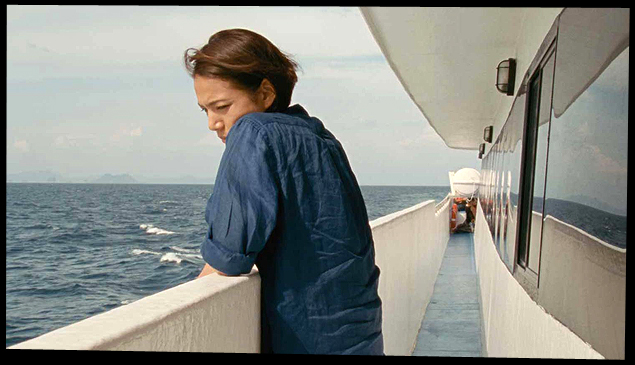 In the town of Krabi, a popular tourist destination in southern Thailand, the pre-historic, the recent past and the contemporary capitalist world awkwardly collide. The town’s local folklore and histories are promoted as attractions to tourists and commercial filmmakers, while the traditional labour force is muted and hidden from the tourists’ eyes. A nameless character, whose identity continually changes, explores various sites and meets people that capture Krabi in its current state. As fact and fiction merge, the mysterious woman slowly disappears into the fabric of the narrative, and time slips between ancient and modern. A dreamlike mystery, uncovering layers of Krabi to understand how humans change a landscape.