Event will include an exclusive and intimate performance and conversation with Eilish, discussion with director R.J. Cutler and other special surprises before the film debuts early on Apple TV+

Billie Eilish releases live audio performance of her song “ilomilo,” as featured in the film

On Thursday, February 25, fans around the world are invited to take part in a global live premiere event to celebrate the release of "Billie Eilish: The World’s A Little Blurry," a new Apple Original Film from award-winning director R.J. Cutler.

The event will include an exclusive stripped down performance by Eilish, special video packages from the film, an interview with Cutler, and an intimate conversation with Eilish especially for her fans, all hosted by Apple Music host & DJ Zane Lowe.

The festivities kick off at 6:00pm PT / 9:00pm ET, and the event will be available to stream for free through the Apple TV App, Apple Music App, and Eilish’s own YouTube channel. Immediately following the event, "Billie Eilish: The World’s A Little Blurry" will debut on Apple TV+ for all subscribers.

Ahead of the highly anticipated global premiere of “Billie Eilish: The World’s A Little Blurry,” Eilish has revealed a live audio performance of “ilomilo," the song that features the very lyric from which the film loans its title. Performed at the Toyota Center in Houston on October 10, 2019, a portion of the performance appears in the forthcoming film; however, fans get the chance to hear the entire performance for the first time today.

"Billie Eilish: The World’s A Little Blurry" tells the true coming-of-age story of the singer-songwriter and her rise to global superstardom. From award-winning filmmaker R.J. Cutler, the film offers a deeply intimate look at this extraordinary teenager’s journey, at just seventeen years old, navigating life on the road, on stage, and at home with her family, while writing, recording and releasing her debut album “WHEN WE ALL FALL ASLEEP, WHERE DO WE GO?” 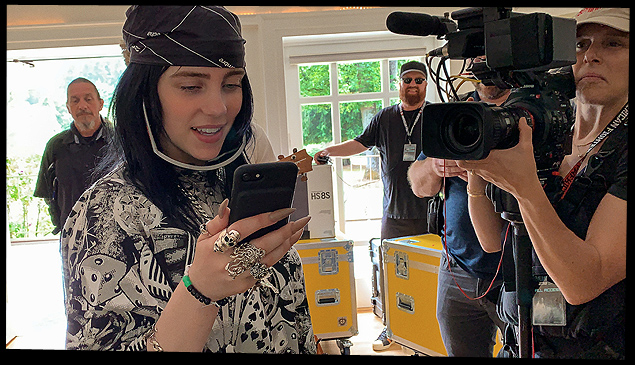 "Billie Eilish: The World’s A Little Blurry” is from Apple Original Films, an Interscope Films, The Darkroom, This Machine production in association with Lighthouse Management + Media.

Eilish has a long history with Apple. In addition to being a frequent and favorite interview guest of Apple Music’s own Zane Lowe, the Up Next alumnus has hosted not one, but two radio shows of her own on Apple Music with "Groupies Have Feelings Too” and Me and Dad Radio.” In 2018, Apple tapped Eilish to pen an original ballad for the company’s 2018 holiday campaign. The following year she set the record for Apple Music’s most pre-added album ever leading up to the release of "When We All Fall Asleep Where Do We Go?" and is consistently among the top most popular artists on the service. In December 2019 Eilish received top honors for Global Artist of the Year, Top Album of the Year and Songwriter of the Year with her brother FINNEAS at the first ever Apple Music Awards.

Apple TV+ is home to award-winning Apple Originals from today’s most imaginative storytellers. Apple TV+ offers premium, compelling drama and comedy series, feature films, groundbreaking documentaries, and kids and family entertainment, and is available to watch across all your favorite screens. After its launch on November 1, 2019, Apple TV+ became the first all-original streaming service to launch around the world, and has premiered more original hits and received more award recognitions faster than any other streaming service. Apple Originals have been honored with 249 awards nominations and 70 wins in just over a year, including Critics Choice Awards, Critics Choice Documentary Awards, Daytime and Primetime Emmy Awards, an NAACP Image Award, a Peabody Award and more.

Apple TV+ is available on the Apple TV app in over 100 countries and regions, on over 1 billion screens, including iPhone, iPad, Apple TV, iPod touch, Mac, select Samsung, LG, Sony and VIZIO smart TVs, Amazon Fire TV and Roku devices, Chromecast with Google TV, PlayStation and Xbox consoles, and at tv.apple.com, for £4.99 per month with a seven-day free trial. For a limited time, customers who purchase a new iPhone, iPad, Apple TV, Mac or iPod touch can enjoy one year of Apple TV+ for free. This special offer is good for three months after the first activation of the eligible device.*