This year’s Cannes Film Festival promises to be a particularly memorable one for the award-winning Artem SFX, who have provided the special effects for two of the most eagerly awaited independent films being shown there. Both films are from UK-based film group, Goldfinch Studios, and are the creative work of writer-director Carl Strathie. Solis, Strathie’s debut feature, will be in the Cannes Festival section Marché du Film, while The Encounter (aka Transience) will have its long-awaited first-look at the festival. Both films are being sold at the market by LA-based sales company, Cinema Management Group (CMG).

In Solis, Troy Holloway is trapped aboard a drifting escape pod shooting towards the Sun. With oxygen rapidly depleting, and the craft due to burn up in 90-minutes, is there any hope of salvation from a rescue party in frantic pursuit? And does the recently-bereaved Holloway even want to be saved? 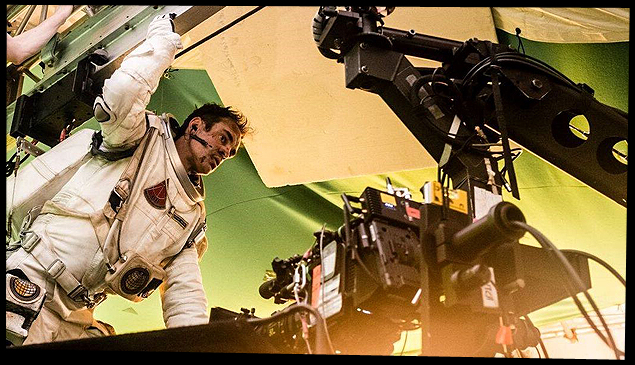 Obviously, such a story demands considerable special effects expertise – more so considering Strathie was very specific about his requirements, as he explains “We wanted to have as many practical elements on screen rather than 'fix it in post' CGI.”

Artem’s CEO, Mike Kelt, reveals some of the challenges that this presented “As the story revolves around a person drifting through space in a capsule, a lot of the SFX we produced involved helping to recreate the effect of weightlessness, with various overhead flying rigs and harnesses being built to cope with the restricted studio space and sets. Sometimes we mounted the actor on long moving horizontal poles and used wires from above that could track the actor over the set. In addition, there were pyrotechnic and breakaway effects and CO2 gas jets.”

“We worried that a huge SFX house like Artem wouldn't be the right fit for our project,” explains Strathie, “but they are incredibly supportive of independent filmmakers and managed to provide us with everything we needed to accommodate our budget and get the results that we wanted on screen. The results were a triumph.”

After the hugely successful collaboration on Solis, Strathie didn’t hesitate when it came to recruiting an SFX team for his follow-up feature, The Encounter. “Knowing how amazing they were for Solis we knew we had to get Artem on board right away. They were with us right from day one of development to figure it all out.”

A year after the mysterious disappearance of an 8-year-old girl, her grieving family have an inexplicable and harrowing encounter with strange lights in the nearby forest, seemingly visitors from another world. What they don’t realise is that these 'beings' will lead the family to the truth behind the little girl's disturbing disappearance.

“At the centre of our work was the requirement for a tall thin alien,” recalls Mike Kelt. “This was sculpted in the traditional way, and built up in stages as a giant puppet, complete with an elongated skeleton and internal organs covered in a near transparent skin to allow for back-lighting while being surrounded in ethereal mist. It was a fascinating creative challenge, and we were delighted with the results.” Artem also provided the all-important atmospheric effects for the film, encompassing everything from low-lying mists, rain and wind to flashing torches and toys that go haywire.

Once again, Strathie was thrilled with another hugely successful collaboration. “The whole team are natural creatives and problem solvers and you can see in every one of them how much they love what they are doing, which is a pleasure to be around. Artem is a company that you can rely on 100% and know the results would be exactly as intended, which is why we will continue to collaborate with them again and again and again!"