Aimed at kids aged 5-8, Eddy and the Ecosaurs (52 x 11’) follows novice scientist Eddy and his junior dinosaur crew thinking BIG to help others, all around Volcano Valley. Each dino has a specialist skill that befits their natural talents and size. Together, they help their evolving community of dino and human friends with all sorts of challenges and problems, using a winning mix of dino-strength, cool tech and teamwork. Only one problem: on the other side of the Volcano lives Lucy Lava – a highly ambitious inventor who thinks everything’s a competition with Eddy.

The series champions diversity by focusing on stories that spring from the varied characters’ points of view, hobbies, and cultural references. Episodes will involve creative use of eco-friendly technology and engineering to solve problems and spark children’s interest in science through wacky inventions, lost-island adventure, and comic entertainment. The vibrant new series is being developed at Omens Studios’ UK office, with the animation produced at its award-winning studio based in Singapore. 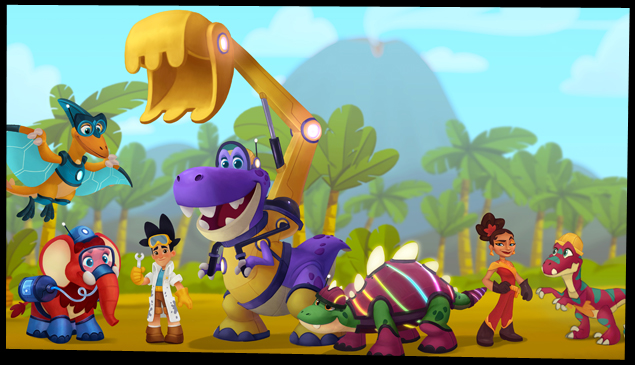 Chi Sim Tang, CEO of Omens Studios, said “Eddy and the Ecosaurs is a fantastic addition to our growing preschool slate, providing a huge helping of fun and adventures with diverse characters and imaginative storylines. We can’t wait to bring the series to the market as we are sure Eddy and his dino friends will be a huge hit with children across the globe.”

About Omens Studios
Omens Studios, headed by CEO Chi Sim Tang, is an award-winning animation and interactive studio built for the digital age, creating fun characters and engaging stories that resonate with kids of all ages. With offices in Singapore, Malaysia, the U.K., the U.S.A. and China, Omens Studios creates brands and produces and distributes content to fans across the globe.

Omens Studios’ award-winning preschool slate includes 3D animated series Counting with Paula and Leo The Wildlife Ranger – both of which have sold to key broadcasters internationally.

The company has recently expanded its global footprint opening an office in London headed by Managing Director Harry Teper. The new office has a specific remit of creating global brands for the company’s IP through distribution, co-production, marketing and digital activity. It will also act as Omens’ pre-production hub with all new IP development – and some production – being managed out of the UK. The first two projects out of the London office are brand new titles for a gender neutral kids demographic: Amy & the Afterlife, and Dragon Lizzardo.