Bohemian Rhapsody takes the Film Chart Number 1, becoming the fastest-selling digital download movie ever in the UK | The Fan Carpet

Bohemian Rhapsody is the champion on the Official Film Chart, climbing to Number 1 on the same week it picks up four Oscars at the 91st Academy Awards.

The Queen biopic lands at the top on downloads alone, more than doubling the sales of this week’s Number 2. OfficialCharts.com can also reveal Bohemian Rhapsody is the UK’s fastest-selling digital download movie of all time, selling nearly 265,000 digital copies in its first eight days. It narrowly beats Marvel’s Avengers: Infinity War which racked up just under 253,000 digital downloads in its first eight days last Summer. 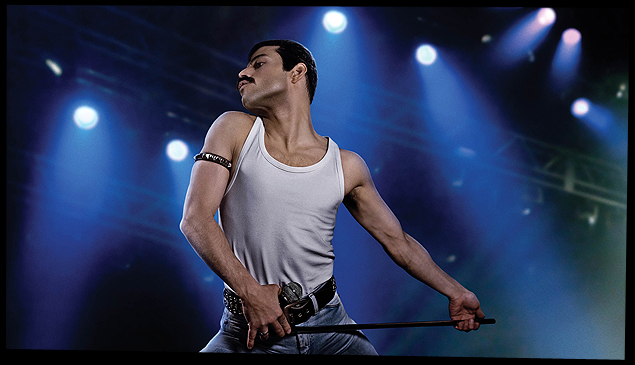 Climbing three places to return to its peak, spy caper Johnny English Strikes Again is at Number 2, ahead of last week’s chart-topper A Star Is Born which slides to Number 3 - the hit 2018 film starring Lady Gaga and Bradley Cooper took home an Academy Award at the weekend (24 February) when Shallow was awarded Best Original Song.

First Man takes one giant leap back into the Top 10, hopping seven to Number 4 following its release on disc; while Venom slips two to Number 5 and Goosebumps 2: Haunted Halloween rises one at Number 6.

This week’s highest new entry is Smallfoot (7). A yeti named Migo (Channing Tatum) who lives in a tribe at the top of the Himalayas is convinced he has spotted a “smallfoot” – a human – and tries to prove to his tribe that it, and a world below the clouds, exists. The animated adventure features an all-star cast including James Corden, Zendaya, LeBron James and Danny DeVito.

At Number 8 is a second brand new entry Hunter Killer; Gerard Butler stars as a US submarine captain on a mission to rescue the Russian president. The Greatest Showman (9) spends its 17th consecutive week in the Top 10. Finally, The House With A Clock In Its Walls (10) ticks over to another week in the chart.

This week’s Official Film Chart online show features an exclusive clip of Dr Seuss’ The Grinch, the animated film where The Grinch is voiced by Benedict Cumberbatch, available to download and keep from March 1.

The chart - the result of a partnership between the Official Charts Company, the British Association for Screen Entertainment and incorporating data from retailer members of the Entertainment Retailers Association - is published on OfficialCharts.com every Wednesday at noon and counts movie downloads from services including Amazon, iTunes, Sky Store, Virgin Media Store, Rakuten TV, Talk Talk TV, as well as 4K UHD, Blu-ray and DVD disc sales from all high street and online retailers.