Cast Announced For Spectacular 5 Star Stage Adaptation Of C.S. LEWIS’ Much Loved Classic THE LION, THE WITCH AND THE WARDROBE | The Fan Carpet

Cast Announced For Spectacular 5 Star Stage Adaptation Of C.S. LEWIS’ Much Loved Classic THE LION, THE WITCH AND THE WARDROBE

Casting was announced today for the smash-hit Leeds Playhouse production of C.S. Lewis’ classic The Lion, the Witch and the Wardrobe, voted the nation’s favourite book in 2019.

It begins a major tour of the UK and Ireland at Curve, Leicester on Tuesday 2 November 2021, travelling to Aylesbury, Southampton, Sunderland, Salford, Cardiff, Nottingham, Edinburgh, Canterbury, Plymouth, Glasgow, Birmingham, Dublin, Woking and finally completing the tour in Norwich on 9 April 2022. The National Press night is on Thursday 9 December at 7pm at the Lowry in Salford.

The show broke box office records at Leeds Playhouse in 2017 and played to packed houses and critical acclaim at the Bridge Theatre in London in 2019. 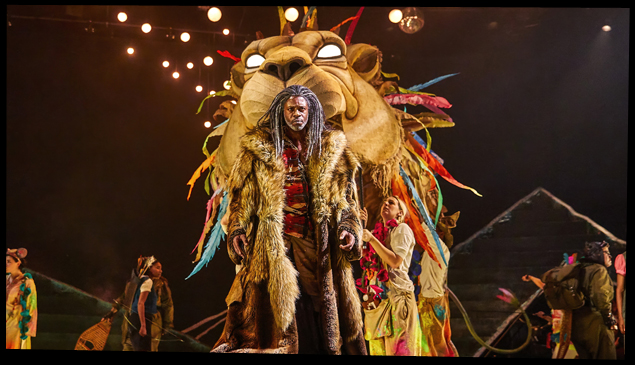 Step through the wardrobe into the enchanted kingdom of Narnia. Join Lucy, Edmund, Susan and Peter as they wave goodbye to wartime Britain and embark on the most magical of adventures in a frozen, faraway land where they meet a Faun, talking Beavers, Aslan, the noble king of Narnia, and the coldest, most evil White Witch.

This critically acclaimed production is “A theatrical miracle” (The Times).

The tour will be directed by Michael Fentiman, based on the original production by Sally Cookson with original Set and Costume design by Rae Smith.  Michael’s previous productions include the Olivier Award-nominated Amélie (Watermill Theatre/The Other Palace/UK Tour and currently running in the West End), The Windsors: Endgame (also running in the West End), The Importance of Being Earnest (Vaudeville Theatre), the 50th anniversary production of Joe Orton’s Loot (Park Theatre/Watermill Theatre), Titus Andronicus and Ahasverus (Royal Shakespeare Company), The Taming of the Shrew (Sherman Theatre/Tron Theatre) and, as director and writer, CinderELLA (Nuffield Southampton) and The Last Days of Anne Boleyn (Tower of London).

The Lion, the Witch and the Wardrobe is produced on tour by Elliott & Harper Productions and Catherine Schreiber and based on the original Leeds Playhouse production.

Producer Chris Harper said “C.S. Lewis wrote "they open a door and enter a world” and this is what every child imagines and dreams about. This is exactly why we’re thrilled to be able to bring this incredible new version of The Lion, The Witch and The Wardrobe on a tour of the UK in time for Christmas 2021. Following a record breaking success at the Leeds Playhouse and the Bridge Theatre in London, the Pevensie children will travel from Narnia to venues across the UK and Ireland.

It has been a challenging time for all of us, but we can’t wait for children and adults alike to join us on this truly magical journey through the wardrobe.”

Reviews for The Lion, The Witch and The Wardrobe include:

★★★★
THE TELEGRAPH
‘An absolutely spellbinding return to Narnia’

Photographs for the London production of The Lion, the Witch and the Wardrobe (2019/20 cast) by Brinkhoff/Mogenburg

The Lion, The Witch and The Wardrobe, directed by Sally Cookson and co-produced by Catherine Schreiber, premiered at Leeds Playhouse in 2017 and transferred to the Bridge Theatre in 2019.

Previous productions include Death of a Salesman, co-produced by Cindy Tolan and the Young Vic, and directed by Marianne Elliott and Miranda Cromwell (2020 Olivier Award winners for Best Director). Starring Olivier-nominated Wendell Pierce as Willy Loman and Best Actress Olivier Award Winner Sharon D Clarke as Linda Loman, the production played to sell out houses at both the Young Vic and at The Piccadilly Theatre in 2019.

Marianne Elliott’s Olivier Award-winning production of Company by Stephen Sondheim and George Furth ran in London’s West End from 26 September 2018 – 30 March 2019; the 2017 West End premiere of Simon Stephens’ Heisenberg: The Uncertainty Principle;  and the 2018 co-production of the Broadway transfer of the National Theatre’s production of Tony Kushner’s Angels in America, also directed by Marianne.

Elliott & Harper’s Broadway transfer of Stephen Sondheim’s Company previewed at the Jacobs Theatre in New York from March 2020 before the closure of Broadway theatres due to the Covid pandemic. It will re-open in November 2021.

Catherine is most proud of bringing The Scottsboro Boys to London. Catherine’s new interview show, Broadwayandbeyondtv.com  just launched on Reachtv, appearing at over 90 airports in North America and the UK.

About Leeds Playhouse
Leeds Playhouse has been welcoming audiences for 50 years. As a registered charity (No. 255460), the theatre creates work which is pioneering and relevant, seeking out the best companies and artists to create inspirational theatre in the heart of Yorkshire. The Playhouse recently underwent a £16m transformation which includes improved access to and around the theatre, a new city-facing entrance and the addition of a new studio theatre, the Bramall Rock Void.

A dedicated collaborator, Leeds Playhouse works with distinctive, original voices from across the UK. Its Artistic Development programme, Furnace, discovers, nurtures and supports new voices, while developing work with established practitioners. It provides a creative space for writers, directors, companies and individual theatre-makers to refine their practice at all stages of their careers.

The sector-leading Creative Engagement team works with more than 12,000 people aged 4–95 every year which continued throughout the last year via PLAYHOUSE CONNET. The team connect with refugee communities, young people, teachers and students, older people and people with learning disabilities, including working in specific areas of the city. The Playhouse pioneered Relaxed Performances ten years ago and more recently have developed Dementia-Friendly performances both of which are becoming the norm across the industry.

As a registered charity, Leeds Playhouse relies on the support of valued partners to make great things happen. It is grateful for the continued support of Arts Council England, Leeds City Council, The Liz and Terry Bramall Foundation and the many charitable trusts, business partners and individuals that continue to support the vital work of the theatre.