Channel 5’s Milkshake!, the commissioning broadcaster in the UK for seasons 2 and 3 will TX the second season with a British-voiced version from 25th June 2018.

The first series of Floogals was produced in 2014/15 in the UK by The Foundation - part of the Banijay Group - as a co-production between Zodiak Kids and Nevision. The second and third series have been produced by Nevision Studios One, a subsidiary of Nevision.

Independent UK production company Nevision has secured a third season commission for its hit animated show, Floogals, from co-production partner Universal Kids, NBCUniversal Cable Entertainment’s network for kids 2-12. Channel 5’s Milkshake!, the commissioning broadcaster in the UK for seasons 2 and 3 will TX the second season with a British-voiced version from 25th June 2018.

Floogals is a ground-breaking mix of photo-real CGI, and live action. Fleeker, Flo and Boomer are pocket-sized alien adventurers on a mission to observe, experience and detail the new and exciting world around them – Planet Earth! Arriving in their spaceship with a bump from the distant planet Floog, the Floogals are on a mission to document everything around them in the peculiar world of “hoomans”. Whilst trying to keep their presence a secret, the innately inquisitive Floogals discover the wonders of our big, exciting and sometimes baffling world as we see it from their tiny perspective – four inches off the ground!

The first series of Floogals was produced in 2014/15 in the UK by The Foundation - part of the Banijay Group - as a co-production between Zodiak Kids and Nevision. The second and third series have been produced by Nevision Studios One, a subsidiary of Nevision. 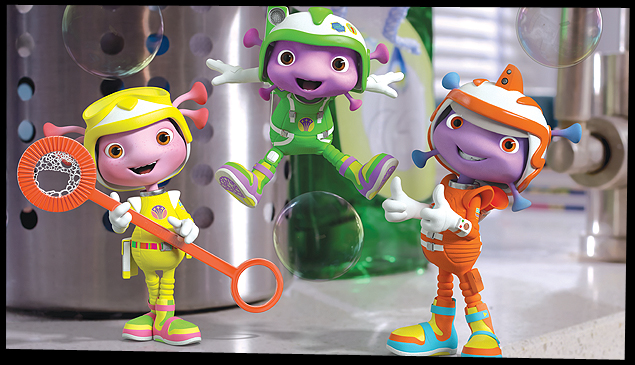 “It is truly fantastic to be able to support such an inventive British series,” said Alison Bakunowich, SVP and General Manager for Milkshake! and Nickelodeon. “Our audience loves Floogals and I am so pleased that we are able to offer the series a home on Milkshake!”

About Milkshake!
Channel 5’s Milkshake! is home to some of the world’s favourite preschool characters. There is a range of stimulating and engaging programmes that include strong story led animation, genuine documentaries for pre-schoolers and presenter led high quality musical entertainment. 2017 saw Milkshake achieve its strongest year to date amongst Children, 4-9s, HWKs and HWKs 0-3. Milkshake was the number one breakfast destination (6-9am) for Children and 4-9s in 2016. Channel 5 broadcasts 24 hours of children's programmes every week. Milkshake is on air from 0600 - 0915 every weekday and 0600 - 10.00 on Saturday and Sunday.

About Channel 5
Channel 5 launched as Britain's fifth public service channel in March 1997 and has been owned by Viacom International Media Networks since September 2014. Channel 5, 5STAR, 5USA and Spike reach 4 in 5 of the UK viewing public each month with a broad mix of popular content for all the family across entertainment, documentaries, sport, drama from the UK and US, films, reality, comedy, children’s and news. My5 is a new service allowing viewers to watch content online for free from Channel 5, 5STAR, 5USA, and Spike.

About Universal Kids
Universal Kids represents the world of NBCUniversal family brands. As a kid-focused ecosystem with great TV content at the center, Universal Kids is programmed for the 2-12 year old audience, with a fresh mix of animated content, unscripted entertainment, and proven international hits. Launched in September 2017 and available in over 59 million homes, Universal Kids is available for kids and families across all platforms, including on air, online, On Demand and via mobile with the Universal Kids app.

About Nevision
Nevision is a creative hub, rooted in the production and financing of quality television and theatrical content for the global market. Launched in 2013, Nevision is an independent production company that originates, produces and facilitates content creation; curating and nurturing a project from inception to exploitation. Nevision exclusively represents an investment group and is able to access deficit funding as required.

The company has a broad slate of series currently in production including: scripted series Keeping Faith with Vox Pictures for S4C and BBC Wales and Alex with SF Studios in Sweden for Viaplay. Nevison’s first feature documentary Manolo: The Boy Who Made Shoes for Lizards is now available on Netflix globally following its theatrical release last year.

Nevision’s board includes some of the UK’s most experienced and creative business executives including James Cabourne, Neil Zeiger and Nigel Pickard with a string of globally renowned production credits to their names.

Nevision also owns a majority stake in boutique financing and distribution company About Premium Content (APC), with offices in Paris and London.