Charlie Harper, Michael Scott And THESE Main Character Departures Have Ruined Shows According To New Study From OnBuy Movies | The Fan Carpet

Charlie Harper, Michael Scott And THESE Main Character Departures Have Ruined Shows According To New Study From OnBuy Movies

Charlie Sheen’s departure from Two and a Half Men cost the show a decline in ratings of 62.3%.

Meghan Markle and Patrick J. Adams’ departure from Suits led to a 15.1% decrease in the show’s ratings.

(Spoiler!) After the (supposed) death of Rick Grimes in The Walking Dead, the show saw an increase of 3.8% in ratings!

What’s worse than a great TV series ending? Having your favourite character leaving the show! Unfortunately, this happens quite often. The most recent example being Regé-Jean Page leaving Bridgerton, which left many viewers heartbroken.

But whilst it’s impossible to predict how the show is going to perform the season after the departure of such a loved character, OnBuy Movies sought to find out which other main character TV exits have ruined (or improved) the shows.

To do so, OnBuy Movies gathered a list of the most dramatic main character exits in TV and studied the average audience scores on Rotten Tomatoes for the last season in which the character was featured, compared to the season after.

RESULTS
The departure that has shaken the TV industry the most is Charlie Sheen in Two and a Half Men, cutting more than a half of its viewership. After Sheen was fired from the series in season 8, data from Rotten Tomatoes showed a decline of 62.3% in ratings compared to season 9.

In second place is the departure of Steve Carell in The Office US, with a decrease in ratings of 38.7%, after Michael Scott decided to quit his job and move to Colorado (sad times).

Teen Wolf was not the same after Crystal Reed decided to leave the show either, with the series seeing a drop in ratings of 17.3%, and neither was Shameless after the departure of Emmy Rossum (15.2% ratings drop).

Whilst the departure of Meghan Markle from the Royal family was met with mixed feelings, we can’t say the same about hers and Patrick J. Adams’ departure from Suits, when the show noticed a decline in ratings of 15.1%.

Vikings fans were not very happy about the death of Ragnar either, Rotten Tomatoes showed a decline of 8.8% in ratings after Travis Fimmel left the show.

The Vampire Diaries has been a major hit with people from around the globe, making Elena, Stefan and Damon an unforgettable trio. This all changed when Nina Dobrev made the decision to exit the show, leaving viewers so upset that the ratings dropped by 7.5% the following season.

Not many people expected Dan Stevens to have his character killed off in the third season of Downtown Abbey, and the show took a small hit after his departure, with a drop of 4.3% in ratings the next season.

One of the longest and loved series out there, Grey’s Anatomy, has made us laugh, but has mostly made us cry, with one of the most dramatic moments being when Derek Shepherd, portrayed by Patrick Dempsey, died. This left some fans unable to continue watching the series, as Grey’s Anatomy saw a 2.3% decrease in ratings for the season after Derek’s death.

However, not all character departures end in show ratings plummeting. In fact, when Rick Grimes met his end in The Walking Dead, the next season saw an increase in ratings of 3.8%! 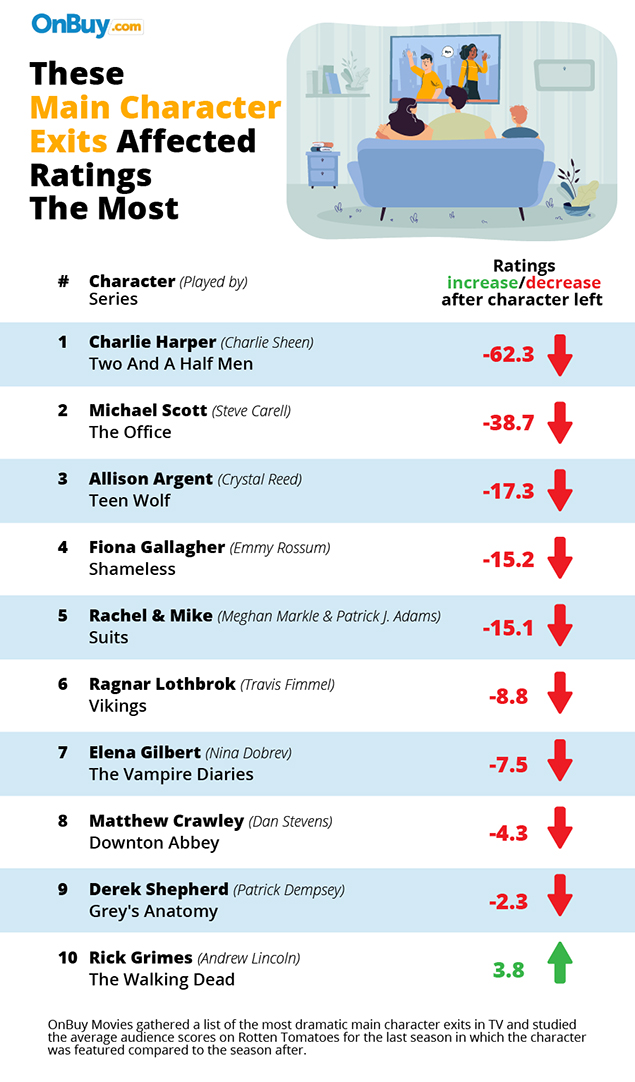 Methodology
OnBuy Movies gathered a list of the most dramatic main character exits in TV and studied the average audience scores on Rotten Tomatoes for the last season in which the character was featured compared to the season after.