Check Out What Some People Are Saying About SCHEMERS! As Indie Hit SCHEMERS Scores Highest New Entry In The Uk Box Office | The Fan Carpet

Check Out What Some People Are Saying About SCHEMERS! As Indie Hit SCHEMERS Scores Highest New Entry In The Uk Box Office

British Indie film Schemers, the true story of Dave McLean’s first foray into the music business as a promoter in 1979, hit cinemas on Friday and scored the highest new entry in the UK Box Office charts amidst a deluge of positive reviews, features around the true story and interviews with the fresh acting talent. Indeed, Mark Kermode labelled Conor Berry as "a star on the rise" and predicts "seeing more of him on the big screen in the future".

The first full length feature film to be made in Dundee, Schemers follows Davie (Conor Berry) who is constantly hustling for his next buck, then losing it on the horses. After a football injury, Davie falls for trainee nurse Shona (Tara Lee) and tries to impress her by running a disco. Along with friends John and Scot, the trio start promoting bands – culminating in a hugely ambitious Iron Maiden gig at the Caird Hall, Dundee. With ambition so grand they go deep in debt with Fergie, a gangster of legendary violence, Davie needs to use every trick to pull off the biggest scheme of his life.

Schemers was released adhering to the theatrical window and continues to play in cinemas across the UK.

SCHEMERS is in UK cinemas now!

Some incredible SCHEMERS artwork even popped up in Dundee this weekend thanks to @sykedundee! 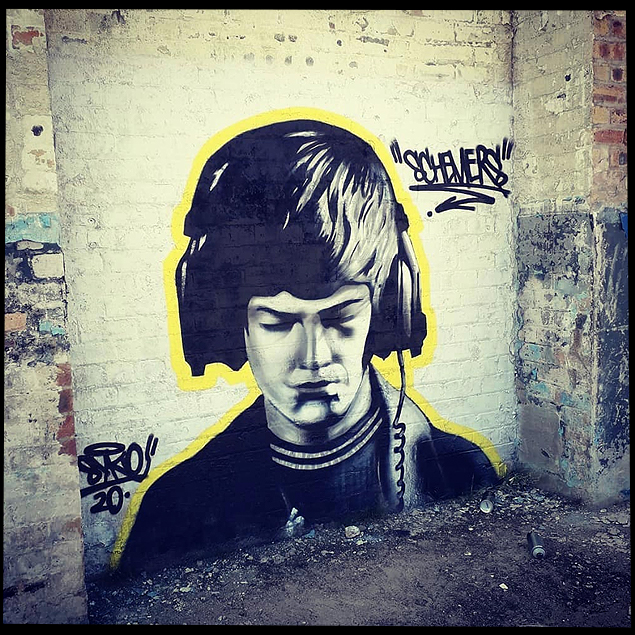 SCHEMERS is the first full length feature film to be made in Dundee, based on the true story surrounding David McLean's stream of ambitious gigs in 1979, these included Simple Minds, XTC, Ultravox, The Skids and Iron Maiden to name just a few! The film won the Audience Award at Edinburgh Film Festival and was recently awarded Best Director and Best Actor at the New York Winter Film Awards.

Shot in and around Dundee using local talent, SCHEMERS celebrates youthful ambition and features a great classic indie soundtrack from 70s & 80s. The film stars an incredible up and coming cast showcasing leading man Conor Berry's award winning on-screen debut as well as Tara Lee (The Fall), Sean Connor (Anna and the Apocalypse) & Grant R. Keelan (The Devil's Machine).
About Black Factory Films
Black Factory Films was set up by Dave McLean and Alex Weston to produce a series of films linking drama with music. Schemers is their debut film and features the early years of Dave McLean's promoting escapades in Dundee. Future projects concern the prequel and sequels to Schemers as well as a spin off TV series.
About Munro Films
Launched in 2011, Munro Films brings award-winning, highly-acclaimed British and international independent films to UK and Irish cinema screens. This includes British comedy drama Eaten by Lions, The Receptionist, Brawl in Cell Block 99, Bruce Barry’s Tawai – A Voice from the Forest, Q Magazine’s Best Film 2017 Bunch of Kunst (A Film about Sleaford Mods), Cobain: Montage of Heck, the BAFTA-nominated Northern Soul, Liv Ullmann’s Miss Julie, McLaren and the Academy Award-shortlisted The Fencer.