• Gary Barlow, Mark Owen, Howard Donald and Robbie Williams to perform from their homes to yours – for Britain’s first ever Meerkat Music show

• Take That is the first in a line-up of headline artists who will perform on the Meerkat Music platform - the latest in comparethemarket.com’s rewards programme - this summer

Everyone’s favourite meerkats are set to entertain the nation with the launch of Meerkat Music. The first-ever show will be available to everyone and feature an exclusive reunion of iconic British band, Take That and Robbie Williams – broadcast digitally from their homes to yours. In a world-first, the band will perform together in a streamed online show via YouTube and Facebook Live. 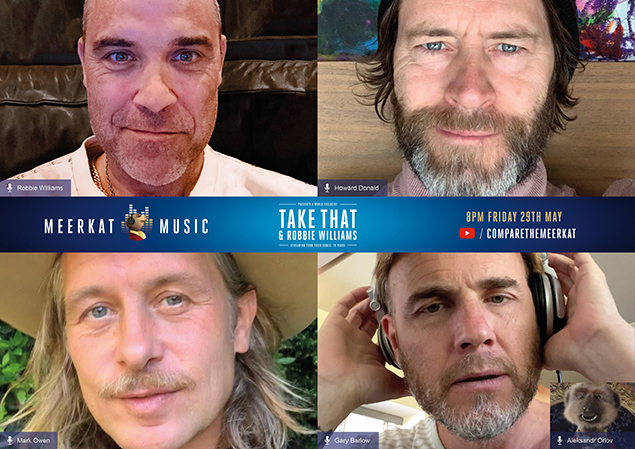 comparethemarket.com Quote “We’ve been blown away by the response to our upcoming Meerkat Music gig with Take That, so we’ve decided to make it available to fans around the world. This will now be a global stream at 8pm UK time on Friday May 29 on the CompareTheMeerkat YouTube channel.”

comparethemarket.com meerkat mogul, Aleksandr, takes centre stage as presenter of the new entertainment series. The debut Meerkat Music virtual show will be broadcast to the nation on Friday 29 May 2020 at 20.00 on the CompareTheMeerkat YouTube channel and Facebook Live.

Hot off the back of Gary Barlow’s charming ‘Crooner Sessions’ in lockdown; the Meerkat Music launch will see the ‘Greatest Day’ stars perform with Robbie Williams for the first time since December 2018. Performing a series of their most celebrated hits, Take That and Robbie Williams will hit the digital stage to entertain fans throughout the nation.

Julie Daniels, Head of Rewards at comparethemarket.com said “We’ve been rewarding our customers with entertainment through Meerkat Meals and Meerkat Movies for a number of years – and music has been on our radar for a while. Kicking off with Take That, the line-up of headline artists who will perform on the Meerkat Music platform this summer will help lift the nation’s spirits at an incredibly challenging time."

We are pleased to announce that Meerkat Music will partner with music therapy charity, Nordoff Robbins, which has been significantly impacted by the current crisis. The partnership will provide support to those affected by life-limiting illness, isolation or disability, through its nationwide network of highly skilled music therapists.”

Gary Barlow, Howard Donald, Mark Owen and Robbie Williams have chosen to support Nordoff Robbins (with whom the band have a long-standing relationship), as well as the charity Crew Nation, a global relief fund for live music crews, alongside this one-off streamed reunion performance.

Take That commented on the digital show “This is a world first for us! Reuniting with our old friend online for a one-off performance! It’s always great getting back together with Robbie and we are really excited to be part of this unique show that everyone can enjoy from home. We are also delighted to be supporting Nordoff Robbins and Crew Nation around this show, two charities very close to our hearts.”

Robbie Williams also commented: “I am really looking forward to performing with the boys again – it’s always a pleasure. Nordoff Robbins and Crew Nation are both such brilliant charities and I’m thrilled to be supporting them around this show. If we can’t go to the stadium…we’ll bring the stadium to us.”

Meerkat Music is the latest from the comparethemarket.com rewards programme – joining Meerkat Movies and Meerkat Meals.

Access to the Take That gig will be available to everyone, with exclusive content and subsequent Meerkat Music headline acts available exclusively for comparethemarket.com customers. Further details on these, show dates and industry support will be announced over the coming weeks.

For further information on Meerkat Music head to the website.

comparethemarket.com was launched in 2006 and has grown rapidly over the past fourteen years to become one of the UK’s leading price comparison websites.

About Nordoff Robbins
Nordoff Robbins is the largest independent music therapy charity in the UK, dedicated to enriching the lives of people affected by life limiting illness, isolation or disability. Our music therapists are expertly trained to tune into each movement, reaction and expression of the individuals they work with to discover how music can enrich their lives. This could be to unlock memories, to communicate where words have failed, to socially connect with family and friends, and to build confidence and self-esteem.

We provide a range of different sessions for children and adults of all ages in our centres in London, Manchester, Newcastle and Scotland - from specialised one-to-one music therapy to shared sessions for groups of different sizes and formats.

We also work in partnership with over 270 organisations to bring music therapy to as many vulnerable people who could benefit from it as possible. These include schools, care homes, hospices, hospitals, mental health services, and brain injury units.

About Crew Nation
Live music inspires millions around the world, but the concerts we all enjoy wouldn’t be possible without the countless crew members working behind the scenes. As COVID-19 puts concerts on pause, we want to extend a helping hand to the touring and venue crews who depend on shows to make a living.

Crew Nation was created to do just that.

Crew members are the backbone of the live music industry, and we hope you’ll join us in supporting them through this temporary intermission until we can once again unite millions around the world through the power of live music. Crew Nation is powered by Music Forward Foundation, a charitable 501c3 organization, that will be administering the fund.

Live Nation has committed $10 million to Crew Nation – contributing an initial $5 million to the fund, then matching the next $5 million given by artists, fans and employees dollar for dollar.

Thanks for your support, and we look forward to seeing you at a show again soon.