Crafting a Beautiful World: A Conversation with VFX Guru Juan Pablo Acosta for the HE Release of WONDER PARK | The Fan Carpet

Crafting a Beautiful World: A Conversation with VFX Guru Juan Pablo Acosta for the HE Release of WONDER PARK

WONDER PARK is the story of a young girl named June with a big imagination who makes an incredible discovery—the amusement park of her dreams has come to life. Filled with the world’s wildest rides operated by fun-loving animals, the excitement never ends. But when trouble hits, June and her misfit team of furry friends begin an unforgettable journey to save the park.

In our interview, we talk to up-and-coming visual effects artist Juan, he tells The Fan Carpet’s Marc Jason Ali about how he got involved with Wonder Park, arriving at the visual style for the film and what the future may hold for Wonder Park...

How did you first get involved with Wonder Park?

Well I was working in Spain and I previously worked with a company that’s called Illion, they are the creators of Wonder Park and since I worked there they called me to see if I wanted to be part of this show.

And to be honest I couldn’t resist; not only because it’s the biggest company in Madrid not just in Spain, they working on it and making it look as good as it does on the scree, and any challenge for me; it was a technical challenge as well an artistic challenge; I couldn’t say no.

Yeah I would say I like Boomer the bear, although I didn’t have a chance to work on the actual characters we where focused more on the construction of the world and the fireworks, so sadly I didn’t work on any of the characters but I would say Boomer was one of my favourites.

Okay cool. When creating the visuals, you say you where more tasked with the scenery and the backgrounds and stuff like that, how did you arrive at the visual style? Because it’s incredible.

Well, we worked closely with the director to bring to life what the director or the co-director had in their minds and this I would have to say it was a combined creation between us, me and Carlos [the director of photography] and the idea that he has combined with the director was to make it beautiful to see and I think they bring that to life combined process because we have to show our work to our supervisors. 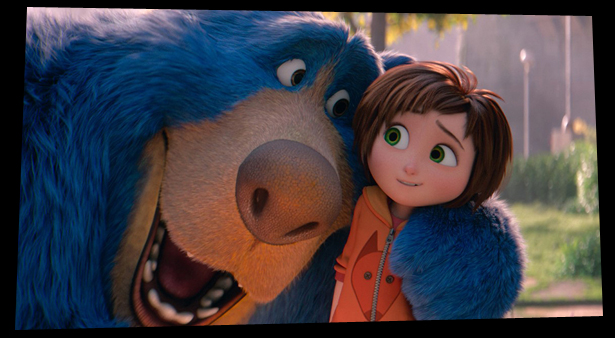