Award-winning AI assisted film-making company, Largo.ai, is set to open up the power of data-driven storytelling for European filmmakers at Marche Du Film – Festival de Cannes 2020 (22 – 26 June) through the financial backing of Media Desk Suisse. Under the pioneering initiative, European filmmakers will be invited to attend an online workshop through CANNES NEXT Marche du Film, where they can apply to gain access to Largo.ai for a period of 3 – 6 months. They will be granted the opportunity to explore how the game changing technology can optimise all phases of a film’s lifecycle, from script development and casting through to financing, post-production, marketing and distribution. In total, 20 filmmakers will be selected from across Europe for the pilot initiative.

Founded by computer scientist and film director, Sami Arpa together with Prof. Sabine Süsstrunk, Largo.ai is a Lausanne-based venture, which has analysed the scripts of over 400,000 features films to train cutting-edge AI programmes. Scooping ‘Best new start-up’ at the San Sebastian Film Festival 2019 and selected as one of the Horizon 2020 Top Start-ups for Berlinale 2020. Largo.ai has already been successfully adopted by US studio-style productions and several prestigious European production companies. Now, with the backing of Media Desk Suisse, it is set to significantly ramp up its foothold within Europe’s independent production scene.

A number of studios and streaming giants, Netflix and Amazon, have been using data-driven technology intelligence for several years and dominate the movie industry with Europe accounting for only $7.7 billion vs the United States’ $11.4 billion of the total $42 billion spent globally, despite Europe representing four out of the top 10 global film industries by total gross1.  This figure is yet more stark for the home entertainment market with Europe accounting for just one third of the US total2.  In the new post pandemic dawn, which has seen the shutdown of cinema theatres and productions across the world, equipping independent producers with the same tools and audience driven insights afforded to the streaming giants will be vital in the recovery process. 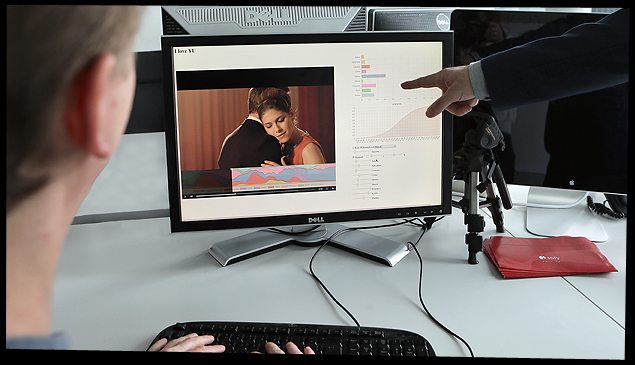 Created in collaboration with the prestigious Swiss engineering university, Ecole Polytechnique Fédérale de Lausanne, Largo.ai offers state-of-the-art, patented technologies developed by leading scientists. The software enables an understanding of the ingredients of a film and predicts the audience reaction and potential revenue, from script level through to rough and fine cut. Through a cognitive pattern understanding system it creates a ‘recipe of ingredients’ together with actionable insights on how to improve audience appeal, increase ROI and minimise risk. This means that not only are larger elements like editing, action, character suitability, genre and music reviewed, but that a host of smaller details are also taken into account, such as the way characters move, how funny they are, their hair colour, or even the objects they use. Country specific insights, where local cultural traits can vary enormously, also enable producers to better allocate marketing and distribution investments.

Increasing ROI and minimising risk is widely deemed as one of the most compelling aspects for integrating AI into filmmaking, ensuring no flops are greenlit. With carefully projected budgets based on how much the film is expected to make at Box Office and a clearly defined audience segment, this enables companies to license their films to video-on-demand platforms based on how many people are likely to watch them. Early insights also help better plan productions and streamline casting – all helping to reduce costs.

Sami Arpa, Co-founder and CEO, Largo Films, said “The role of AI in successful filmmaking is something the US has really embraced, whereas Europe still relies heavily on traditional methods. Artificial intelligence is best kept as an assistance tool – helping to quickly provide insights that underpin human instincts. It’s evolving rapidly. We are excited to be empowering European producers with these tools thanks to Media Desk Suisse and our partner European Producers Club. We hope that, in the current COVID-19 climate, this will help boost the much-needed recovery process – enabling more independent films to be greenlit and financed.”

Recent projects for Largo.ai trialling the software and its predictive analytics include; Domani e Un Altro Giomo directed by Simone Spada, for which it predicted an Italian Box Office of 1.6 million Euros against an actual of 1.7 million Euros based purely on analysis of the script. Guy Ritchie’s The Gentlemen starring Matthew McConaughey was predicted to fetch a US Box Office of $10.6 million on its opening weekend by Largo.ai against an actual of $10.6 million. Spanish film Hasta Que La Boda Nos Separe was also predicted to make $868,000 on its opening weekend by Largo.ai against an actual of $800,000. After analysing all the Oscar-winning features from the 2017 – 2018 season, the tool was presented to the Academy of Motion Picture Arts and Sciences in February 2019, where it was revealed that a majority of the movies, all categories combined, had an astonishing number of similar repeating patterns. Larogo.ai has an accuracy rate of over 80%, making it one of the most competitive and accurate programmes in the AI market.

Largo’s workshop, ‘Boosting European Films Through Artificial Intelligence’ will take place on Friday 26th June from 14.00 – 15.30 Hrs (CEST). Subjects include the importance of digital transformation in the movie industry post COVID-19, the European Film Industry and potential of data-driven technology as well as an introduction of Largo.ai tools and the Media Desk Suisse project. European filmmakers will be invited to trial Largo.ai software through the workshop. To confirm your attendance please visit https://fienta.com/cannes-next-exclusive-largo-ai-2020

About Largo.ai
Largo is a Swiss company providing Largo.ai as a data-driven intelligence platform to the audio-visual industry. Largo.AI is able to analyse a film from as early as the script phase and provide insights also at post-production and distribution stages by analysing first video versions of the movie. The company was awarded the best start-up prize at the San Sebastian Film Festival 2019 and was selected as one of Horizon 2020 Top Start-ups in Berlinale. The company was selected by Slush as one of 15 finalist start-ups among 1500 start-ups all around the world. Largo recently raised CHF 750M from private investors and private programs, which brings a total financing of CHF 1.8M since its launch. The company has gained worldwide press coverage in publications such as Variety, Screen International, Indiewire, and 24 Heures.

About Media Desk Suisse
MEDIA Desk Switzerland is mandated by the Federal Office of Culture (OFC) to manage MEDIA compensatory measures as part of its international strategy. In addition to administering support, the office informs and advises Swiss film and audio-visual professionals. It is understood as a bridge between Switzerland and Europe and facilitates the access of Swiss professionals to the European network. www.mediadesk.ch