Experience the Spectacular Colours of Atlantis on the biggest screen, and see up to 26% more picture ONLY in IMAX | The Fan Carpet

Experience the Spectacular Colours of Atlantis on the biggest screen, and see up to 26% more picture ONLY in IMAX

Aquaman, the highly anticipated superhero origin story from DC Comics starring Jason Momoa, will be specially formatted for IMAX® cinemas. 92 minutes - more than half of the movie - will be presented with up to 26% more picture, only in IMAX.

That means only IMAX audiences will experience Aquaman to the fullest because IMAX screens show more of the movie’s on-land and underwater action-packed sequences. Additionally, with the biggest screens, fans will get to experience the IMAX-sized Jason Momoa!

From Warner Bros. Pictures and director James Wan comes an action-packed adventure that spans the vast, visually breathtaking underwater world of the seven seas, “Aquaman,” starring Jason Momoa in the title role. The film reveals the origin story of half-human, half-Atlantean Arthur Curry and takes him on the journey of his lifetime—one that will not only force him to face who he really is, but to discover if he is worthy of who he was born to be…a king. 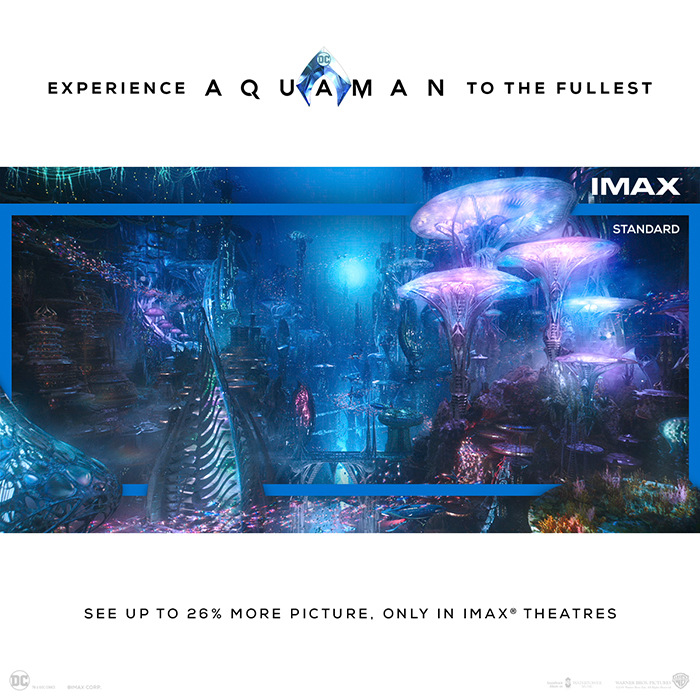 Experience the spectacular colours of Atlantis on the biggest screen, and see up to 26% more picture, only in IMAX cinemas

With the clearest images, brightest colours and most immersive sound, IMAX is the world’s most immersive cinematic experience and brings the stunning visuals of Aquaman to life like no other format. IMAX films are not meant to be simply watched, they are meant to bring viewers into the world of the film - whether on land or underwater - for a truly incredible experience.

In IMAX cinemas, scenes will be specially formatted and presented in an expanded 1.9:1 aspect ratio. This means that only in IMAX will the movie fill more of the screen, and fans will see 26% more picture in IMAX than in standard cinemas.