Following the Record-Breaking win on The Chase, in which a 20 year old took home the biggest solo prize, New data carried out by online betting experts OLBG has revealed the TV game shows you can easily enter and win big on - plus, juicy expert tips on how.

The study found you have the highest chance of winning on Tipping Point with a 58.5% chance of taking home a cash prize. All questions consist of general knowledge, so it really is a test to your own ability, or your ability to revise! However, only two winners won the double jackpot of £20,000, most recently in May 2021 by a retired gardener. It was first won in March 2020.

You have the second highest chance of taking home a cash prize in The Chase with a 25.35% chance of winning. The highest amount to ever be won was a huge £70,000 as a solo player and £100,000 as a team! The great thing about The Chase is you can play tactically by choosing your Chaser, with Shaun being the easiest one to beat! 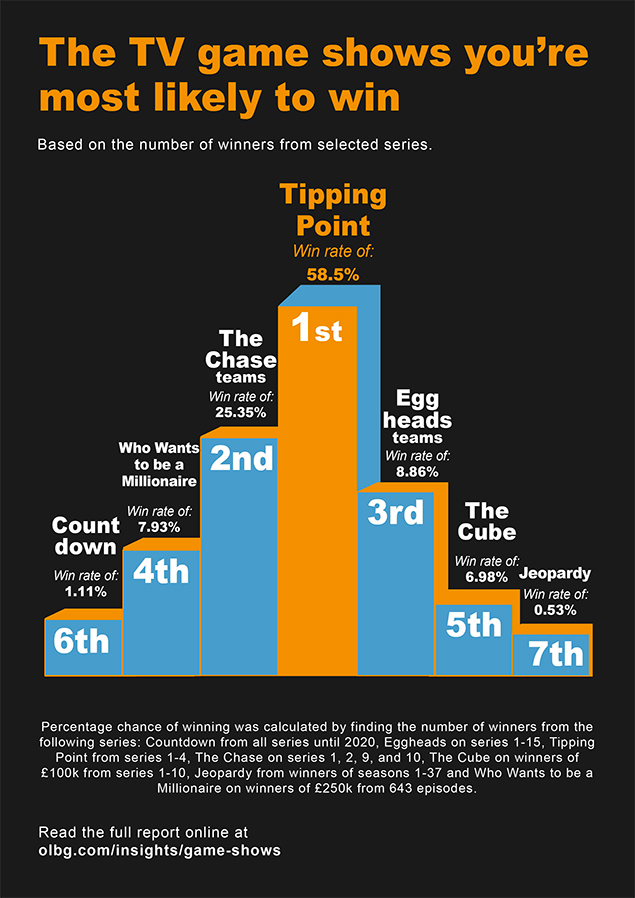 Which game show has the largest jackpot?

Although the odds may not be in your favour to win these shows overall, you are more likely to become a millionaire!

Jeopardy could make you the richest of all game shows!  Although it only has a 0.53% win rate, you could walk away with a life changing £2,472,942 million pounds!!

Who doesn’t want to be a millionaire? In second place is the classic TV game show Who Wants to be a Millionaire, where you have the potential to win a cool £1,000,000. With a 7.93% win rate, becoming a millionaire is not as easy as it looks. Garden designer Keppel was the first person to win £1million on the show in 2000. She later joined the team of trivia experts on BBC quiz show Eggheads.

In third place is The Chase, where contestants have to complete against their chosen chaser for the chance to win the £250,000 cash prize! With a win rate 6.98%, the chances of you winning that small fortune is low. The only person to compete in the final round (and win) on The Cube was Mo Farah, Olympic winning long-distance runner. The athlete competed in a 2012 charity special and donated the grand prize. 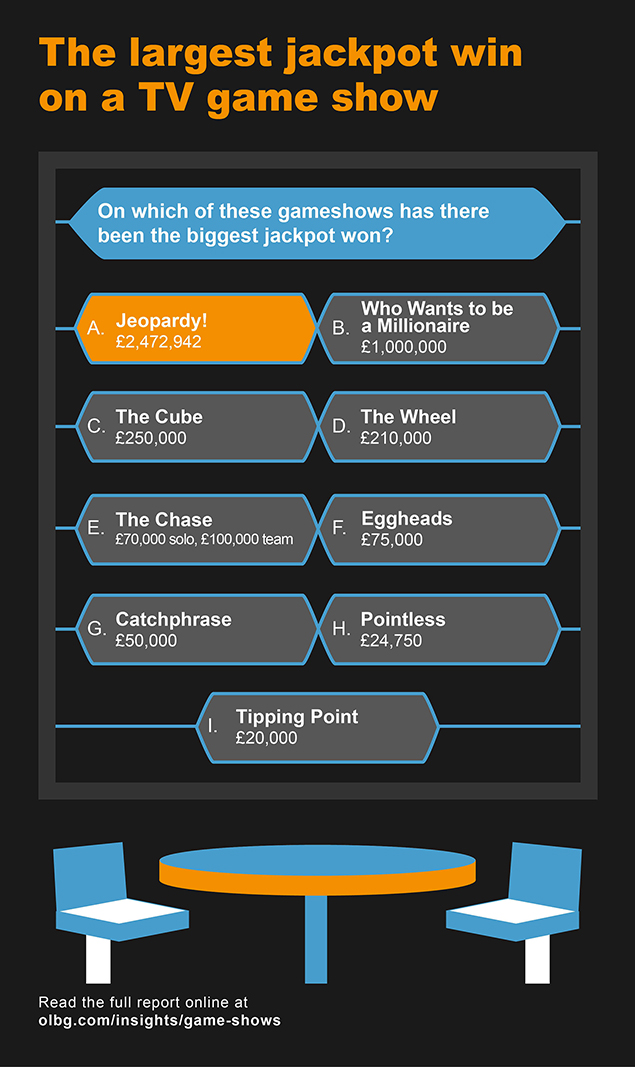 The most popular TV game shows

The most popular TV game shows in the UK is The Chase with 135,000 UK monthly searches, closely followed by Countdown with 110,000 searches and Who Wants To Be A Millionaire with 74,000 searches.

This is an indication as to how popular the shows are and how often people are looking to apply to go on them, which potentially could make it harder to get on.

When looking at UK TV viewings, Who Wants To Be A Millionaire steals the show - their first episode with Jeremy Clarkson in 2018 gained 5.1 million views. This is then followed by The Chase with 2,788,000 viewers looking at an episode from 6th July 2021. The third most-watched is Tipping Point which gained 1,675,000 views from the same date. 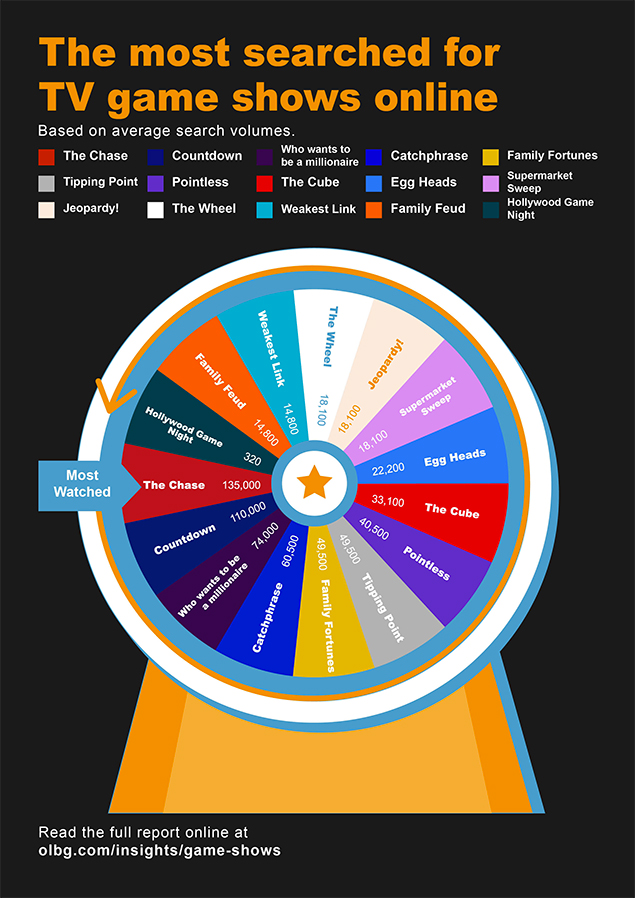 Expert tips for getting on a TV game show

If you're serious about getting on (and winning) a TV game show, then here are OLBG expert tips on making it happen.

1. Look out for contestant calls - Follow Case Me on Twitter and Contestant Collective on Facebook to discover the latest contestant calls. Enter as soon as you possibly can and especially try out newer shows.

3. Make sure your application stands out - Consider ways you can make your entry stand out. If you get a phone interview, try to be as enthusiastic as possible.

4. Consider boosting your social presence before entering - Before it comes to entering the show, especially for more reality TV shows, it could be wise to work on increasing your followers.

5. Finally, embrace being yourself - If you're uncomfortable, it's going to show and could ruin your chances of being casted. Relax and enjoy the experience.

Find out more about the top TV game shows and your best chance of winning over on the OLBG. 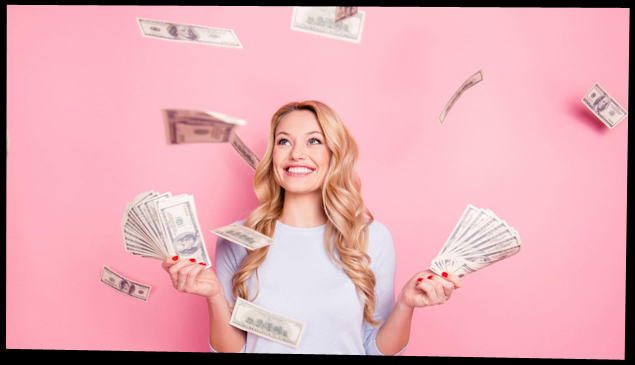 About OLBG
OLBG has grown a fun, friendly community of highly knowledgeable sports bettors who share their expertise to help others improve their enjoyment of betting. Whichever popular sporting event you want to bet on, the OLBG Tipsters have researched the best bets for you.  Over 1.1 million installs of our tips app, averaging 4.6/5 star ratings suggests that OLBG really is helping sports bettors to find more winners. View the website here.

Methodology: We looked the most popular TV game show winners to work out a win rate for each.

Countdown was based on all series until 2020, Egg heads based on series 1-15, Tipping point is based on all time winners from series 1-4, whilst The chase is based on 1,2,9,10 so 4 in total! Also important to note Egg heads and The chase are around winning as a team. We used the data based on winners for the specific series mentioned, and the number of winners to calculate a win rate %.