Facing the Music: An interview with Arrow Record’s Senior Producer James Blackford for the Release of The Iguana With The Tongue Of Fire | The Fan Carpet

Facing the Music: An interview with Arrow Record’s Senior Producer James Blackford for the Release of The Iguana With The Tongue Of Fire

With the superb invigoration and return of Vinyl across the UK and the world, Arrow Video – the British independent distributor of world cinema, cult, art, horror and classic films on Blu-ray and DVD – are moving into the world soundtracks and scores with Arrow Records.

Senior producer James Blackford is offering up some insight into this excellent era to share their plans for fans, where you’ll now be able to add to your film experience and adoration with some superb top titles.

How did Arrow Records come about?

Arrow Records came about through a love of film soundtracks, an obsession with vinyl and a burning ambition to expand Arrow’s publishing activities beyond films and Blu-rays into exciting new areas. We aspired to apply our philosophy of producing top-quality home video editions to a new medium and format. We saw an opportunity to publish some wonderful, underappreciated horror and giallo soundtracks in beautifully presented editions, which showcased newly mastered audiophile quality audio and mouth-watering new artwork. It was too good an idea not to run with!

What has informed your decisions about what to publish?

Arrow Video has a proud history or publishing definitive home video editions of the best of Italian genre cinema, from horror to gialli to westerns… And, as so many of these films have incredible soundtracks, we thought this would be a great place to start. Our first 11 soundtrack editions have largely been drawn from this cinema tradition, with the exception of ZERO BOYS which is a fantastic, very early work from that giant of film soundtracks Hans Zimmer (alongside veteran Stanley Myers). It’s a little-known synth gem!

Some of the highlights of what we have published so far are Ennio Morricone’s wonderfully abrasive and atonal soundtrack to the giallo AUTOPSY and Stelvio Cipriani’s stunning scores to the gialli DEATH WALKS ON HIGH HEELS and THE IGUANA WITH THE TONGUE OF FIRE. Morricone is of course the ultimate maestro but this is one of his more difficult yet rewarding works. It made its vinyl debut on Arrow Records and was a great success at last year’s World Record Store Day. With regards to the two Cipriani’s, I honestly feel this composer’s finest scores give Morricone a run for his money…They are lamentably underappreciated. He had a wonderful ear for sweeping melodies and could make a small chamber orchestra sound immensely epic.

Does Arrow Video’s film publishing activities inform what soundtracks you publish on vinyl?

Wherever possible we try to publish soundtrack vinyl editions of films we have also restored and presented on Blu-ray…This has been the case since our very first vinyl edition PIECES, a Euro splatter classic which boasts a superb score bringing together selections from Fabio Frizzi (THE BEYOND), the aforementioned Stelvio Cipriani, and Carlo Maria Cordio (ABSURD). We have also followed this approach with Roberto Nicolosi’s wonderfully bold and brassy scores to CALTIKI: THE IMMORTAL MONSTER and ERIC THE CONQUEROR, two Mario Bava classics; Berto Pisano’s hauntingly beautiful score to Joe D’Amato’s horror/giallo classic DEATH SMILES ON A MURDERER, and more recently our Blu-ray boxset of films by Jose Larraz, BLOOD HUNGER, which we paired with a beautiful clear vinyl edition of Cipriani’s score to Larraz’s film WHIRLPOOL – another mini-masterpiece from the accomplished composer which had never been published on vinyl before.

Sometimes a soundtrack is so good it warrants a pressing on vinyl even if we do not have the film rights to publish a video edition. This has been the case with two giallo gems: Riz Ortolani’s absolutely awesome score to THE ETRUSCAN KILLS AGAIN, and the obscure but amazing PENSIONE PAURA, composed by Argentinian composer Adolfo Waitzman. Outside of PIECES, all our editions have been first pressings: there is something appealing about taking a soundtrack from obscurity and presenting it in a beautifully mastered and presented limited edition. 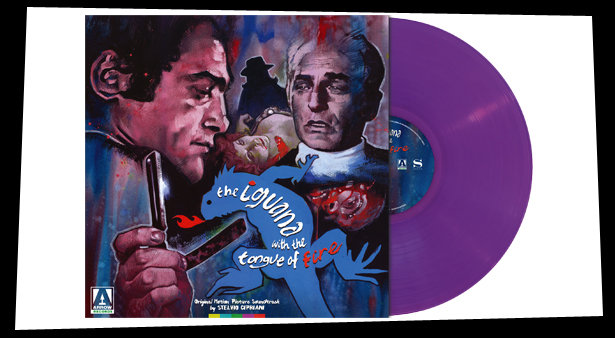