Today Tom Felton, who played Draco Malfoy in the Harry Potter film series, came face-to-face with a shrieking mandrake plant as he revealed Professor Sprout’s Greenhouse for the very first time. The new expansion opens at Warner Bros. Studio Tour London – The Making of Harry Potter on July 1st, and is part of a brand new feature titled ‘Mandrakes and Magical Creatures’.

Brand-new for 2022, Warner Bros. Studio Tour London is opening the glass doors of Professor Sprout’s greenhouse - a fan-favourite set from the Harry Potter film series, where students were taught their Herbology lessons with Professor Pomona Sprout. Built by the original Harry Potter filmmakers, the greenhouse is home to many exotic and magical plants. Just like a Hogwarts student, visitors to the Studio Tour will be able to step into the greenhouse and stop to pull out a potted Mandrake as part of an interactive display. 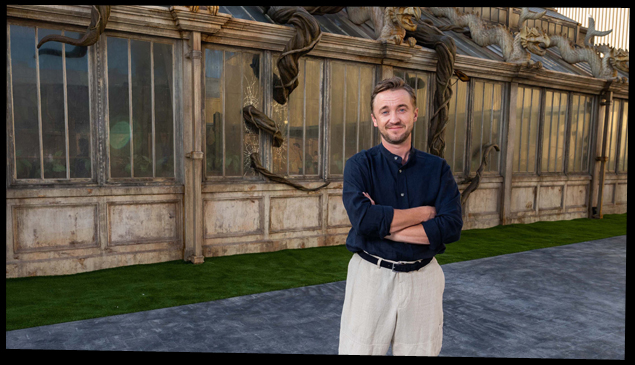 Just like his on-screen character, Draco Malfoy, Tom Felton held up a mandrake plant and heard its famous shrieking. He was able to experience the iconic greenhouse setting from Harry Potter and the Chamber of Secrets for the first time since filming over 20 years ago. Felton looked up at the Venomous Tentacula hanging from the ceiling inside the greenhouse, as well as the dragon sculptures decorating the outside.

The humanoid-looking mandrake plants may look scary, but they had a very important purpose in Harry Potter and the Chamber of Secrets. When the Chamber of Secrets was opened for a second time, many students ended up petrified by the Basilisk, a legendary giant reptile. Professor Sprout was given the task of growing her Mandrakes to full-size, so that they could be cut up and stewed for a Mandrake Restorative Draught.

The greenhouse is a permanent addition to the Studio Tour and will open as part of a brand-new feature, Mandrakes and Magical Creatures, which will open on 1st July and run until 12th September 2022. As part of the feature, visitors will be welcomed into the Great Hall to the Frog Choir scene as seen in Harry Potter and the Prisoner of Azkaban, featuring the costume of conductor of the choir, Professor Flitwick, as worn by Warwick Davis.

In addition to the exciting addition of Professor Sprout’s greenhouse, Warner Bros. Studio Tour London will be expanding the exterior sets in their backlot with new additions including the fountain from the Hogwarts courtyard and a 1:3 scale-version of the Weasleys’ Burrow.

Professor Sprout’s greenhouse, the courtyard fountain and the exterior of the Weasleys’ Burrow will be permanent additions to Warner Bros. Studio Tour London. The Mandrakes and Magical Creatures feature will run from 1st July 2022.

About Warner Bros, Studio Tour London
Now celebrating its 10th year of welcoming visitors, Warner Bros. Studio Tour London – The Making of Harry Potter opened its doors on 31st March 2012. The unique attraction offers visitors the ultimate chance to get up close to authentic sets, discover the magic behind spellbinding special effects and explore the behind-the-scenes secrets of the Harry Potter film series. Visitors can explore the original Great Hall, step into the Forbidden Forest and discover Gringotts Wizarding Bank all before marvelling at the breath-taking miniature scale model of Hogwarts castle. The Studio Tour has been well received with 96% of the 46,000+ reviews on TripAdvisor rating it as ‘Excellent’ or ‘Very Good’ and over 60,000 4 or 5 star ratings on Google Reviews. Tickets must be pre-booked at here and cannot be bought at the attraction.