FOLLOWING AWARD-WINNING, SELL OUT RUNS AT THE EDINBURGH FRINGE FESTIVAL AND THE BUSH THEATRE, RICHARD GADD’S TOUR DE FORCE ONE-MAN SHOW WILL PLAY A STRICTLY LIMITED SEASON AT THE AMBASSADORS THEATRE IN THE WEST END

“I did question whether I deserved it. Where did my wrongdoing stop and hers begin?”

When award-winning comedian Richard Gadd offers a stranger a free cup of tea, he has no sense of the nightmare to come. One act of kindness. Six years of torment.

The sell-out smash hit of last year’s Edinburgh Fringe, Baby Reindeer is the “blistering” debut play (The Daily Telegraph) from Richard Gadd (Monkey See Monkey Do, Netflix's Sex Education). Directed by Olivier Award-winner Jon Brittain (Rotterdam), this is a chilling personal account of compulsion, delusion and obsession. Some admirers simply won’t be shaken off. “A haunted, haunting hour.” (The Guardian). 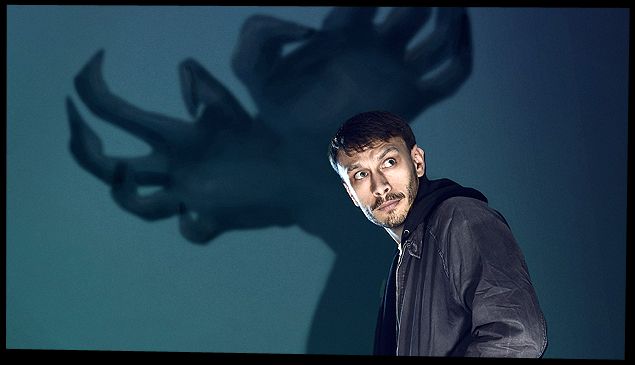 Baby Reindeer will play a strictly limited London run at the Ambassadors Theatre ahead of a New York transfer to BAM in May 2020.

Richard Gadd said “Baby Reindeer has been one of the most challenging, yet rewarding experiences of my life. With an incredible team behind me, I have pushed myself to ridiculous limits in a show I find incredibly hard to say and do. The show is about the past six years of my life. An incredibly complicated, messy, confusing, and ultimately challenging period of time at the hands of a serial stalker hell-bent on ruining my life. It is a period of my life that I still look back on to this day with much unease. How did it get as bad as it did? How was it allowed to go on for so long? Why was there no help for me? I feel a moral duty to let people know the terrifying reality of going through something like this. I am absolutely delighted to be in the West End at such a prestigious venue like the Ambassadors. It is all a dream come true.”

Francesca Moody said “It has been truly incredible to watch the success of Richard's remarkable theatrical debut in Edinburgh and then at the Bush Theatre. Baby Reindeer is one of the most original and brilliant pieces of theatre I have ever seen and I passionately believe that it should be experienced by as many people as possible. I am thrilled to be partnering with Sonia Friedman Productions to bring Baby Reindeer to the West-End and a wider audience.”

Sonia Friedman said “In the early 2000s, I produced, programmed and oversaw dozens of productions at the Ambassadors Theatre. It occupies a special place in my heart as the venue where I learned to push the boundaries of what is possible in commercial theatre. SFP is thrilled to be returning with this extraordinary play featuring a truly break-out performance from Richard Gadd. Baby Reindeer is the first of several remarkable works my creative development team and I have sought out to bring to this beautiful and intimate venue. We are excited to present this original, vital, small-scale work which demands to be seen by a wider audience in London’s West End.”

***** ‘A haunting, unsettling monologue about the nature of obsession’ - Evening Standard

**** ‘…tightens its grip with terrible inexorability’ – The Guardian

**** ‘A master narrator full of intelligent insight and sheer descriptive power.’  - The Scotsman

**** ‘Baby Reindeer will follow you all the way home.’  - Financial Times

Baby Reindeer will play at the Ambassadors Theatre from April 2nd – May 2nd 2020. Over 500 tickets each week will be priced at £25 or less.

Photo by The Other Richard

About Richard Gadd
Richard Gadd is a multi-award winning writer, performer, and actor. His most recent show Baby Reindeer premiered at the Edinburgh Fringe Festival 2019 where it won two awards - the Scotsman Fringe First Award for New Writing and a Stage Award for Acting Excellence. The show then went onto a five-week run at the Bush Theatre in London and was nominated for an Off West End Theatre Award for Best Performer.

His preview show, Monkey See Monkey Do, won the prestigious Edinburgh Comedy Award for Best Show at the 2016 Edinburgh Fringe Festival where it was also nominated for a Total Theatre Award for Innovation. The show subsequently had several sell-out runs at London’s Soho Theatre, toured the UK and Europe, and had a run at the Melbourne International Comedy Festival, where it was nominated for the 2017 Barry Award and was broadcast on Comedy Central.

His other shows Waiting for Gaddot, Breaking Gadd, and Cheese & Crack Whores were also Edinburgh Fringe hits and all went on to three week runs or more in the Soho Theatre. The former won the Amused Moose Best Edinburgh Fringe Show Award 2015 and was nominated for a Malcolm Hardee Award For Innovation 2015. In addition, Richard won a Chortle Comedian’s Comedian Award 2017, as well as being nominated for an Off West End Theatre Award for Best Performer in the same year.

Richard is also a successful actor, who starred opposite Daniel Mays in the BAFTA-nominated BBC2 single drama Against the Law – “surely a breakout role for him,” (The Guardian). Other key acting credits include SKY's Code 404, BBC3’s Clique, and E4’s Tripped. He also recently played a lead role in Sky Arts’ film One Normal Night. The Independent described his appearance as, “a quite wonderful performance,” and The Times described it as, “moving and very well acted.”

Richard is currently filming alongside Stephen Graham and Daniel Mays, in Sky One’s new six-part comedy series Code 404. In addition, Richard is also a writer who has written episodes of Netflix smash-hit Sex Education, as well as Ultimate Worrier for Dave and The Last Leg for Channel Four where he is also one of their correspondents.He also recently recorded his own pilot for BBC Radio 4 with Dabster Productions, The Richard Gadd Show, which aired in July 2018. He has also had several written projects broadcast on BBC Radio 4 and BBC Radio Scotland.

Abut Jon Brittain
Jon Brittain is a playwright, comedy writer and director. His play Rotterdam earned him a nomination for the Charles Wintour Award for Most Promising Playwright at the Evening Standard Theatre Awards and won the Olivier Award for Outstanding Achievement in an Affiliate Theatre. Other work includes the critically acclaimed Billionaire Boy: The Musical, the cult hit Margaret Thatcher Queen of Soho and its sequel Margaret Thatcher Queen of Game Shows, and the Scotsman Fringe First Award-winning A Super Happy Story (About Feeling Super Sad). He directed John Kearns’s Fosters Award-winning shows Sight Gags for Perverts and Shtick, and the follow-ups Don’t Bother, They’re Here and Double Take and Fade Away, as well as shows for Tom Allen, Mat Ewins and Tom Rosenthal. For TV he has been a staff writer on Cartoon Network’s The Amazing World of Gumball and on Netflix’s The Crown.

Since launching in 2018 the company has been awarded three Fringe First Awards and produced work in London, New York, on tour across the UK and at the Edinburgh Festival.

FMP is led by Francesca Moody who is best known as the original producer of the multi-award-winning FLEABAG by Phoebe Waller-Bridge, which she has produced globally on behalf on DryWrite, most recently in London’s West-End at the Wyndhams Theatre.

Francesca is also the former Producer of British New-Writing theatre company Paines Plough where she worked on plays by the UK’s leading playwrights including Dennis Kelly, Duncan Macmillan and Kate Tempest.

Since 1990, SFP has developed, initiated and produced over 170 new productions and together the company has won a staggering 55 Olivier Awards, 30 Tonys and 2 BAFTAs.

In 2019, Sonia Friedman OBE was awarded ‘Producer of the Year’ at the Stage Awards for a record breaking fourth time. In 2018, Friedman was also featured in TIME 100, a list of Time magazine’s 100 Most Influential People in the World. In 2017 she took the number one spot in 'The Stage 100', becoming the first number one in the history of the compilation not to own or operate West End theatres and the first solo woman for almost 20 years.

Previous theatre productions include: Fiddler on the Roof, Rosmersholm, The Ferryman, The Inheritance, Summer and Smoke, Dreamgirls, The Jungle, All About Eve, Consent, The Birthday Party, Ink, Hamlet starring Andrew Scott, Our Ladies of Perpetual Succour, Who’s Afraid of Virginia Woolf?, Travesties, The Glass Menagerie, Nice Fish, A Christmas Carol, Funny Girl, Farinelli and The King, Hamlet starring Benedict Cumberbatch, 1984, Sunny Afternoon, Bend It Like Beckham, The Nether, The River, Electra, King Charles III, Shakespeare in Love, Ghosts, Mojo, Chimerica, Merrily We Roll Along, Old Times, Twelfth Night and Richard III, A Chorus of Disapproval, The Sunshine Boys, Hay Fever, Absent Friends, Top Girls, Betrayal, Much Ado About Nothing, Clybourne Park, The Children’s Hour, A Flea in Her Ear, La Bête, All My Sons, Private Lives, Jerusalem, A Little Night Music, Legally Blonde, Othello, Arcadia, The Mountaintop, The Norman Conquests, A View From the Bridge, Dancing at Lughnasa, Maria Friedman: Re-Arranged, La Cage aux Folles, No Man’s Land, The Seagull, Under the Blue Sky, That Face, Dealer’s Choice, Hergés Adventures of Tintin, In Celebration, Boeing-Boeing, The Dumb Waiter, Rock ‘n’ Roll, Love Song, Faith Healer, Bent, Eh Joe, Donkeys’ Years, Otherwise Engaged, Celebration, Shoot the Crow, As You Like It, The Home Place, Whose Life Is It Anyway?, By the Bog of Cats, The Woman in White, Guantanamo: ‘Honor Bound to Defend Freedom’, Endgame, Jumpers, See You Next Tuesday, Hitchcock Blonde, Absolutely! {Perhaps}, Sexual Perversity in Chicago, Ragtime, Macbeth, What the Night Is For, Afterplay, Up for Grabs, A Day in the Death of Joe Egg, Noises Off, On an Average Day, A Servant to Two Masters, Port Authority, Spoonface Steinberg and Speed-The-Plow.

About Bush Theatre
Opened in 1972, Bush Theatre is an internationally renowned ‘new writing powerhouse whose size belies its influence’ (Financial Times).  A champion of playwrights and operating in one of the most culturally diverse areas of London, the Bush has a commitment to its local community and the wider artistic community braiding these two strands of work together to produce an engaging and challenging programme which reflects the world we live in.

The Bush Theatre’s talent development programmes discover and develop the very best of the UK’s leading artistes often through the theatre’s submissions scheme.  We believe our theatre has a responsibility to programme and generate opportunities for new and established makers and with long term residencies, add to the sustainability of their careers.

Since re-opening in March 2017 after a year-long £4.3 million renovation by architects Haworth Tompkins, the Bush strives to create a space where all communities can be part of our future and call this theatre home. The Bush was awarded ‘Best London Theatre’ by The Stage in 2019.