TICKETS ARE ON SALE

Edmond de Bergerac, Alexis Michalik’s hilarious comedy and French theatre phenomenon, will have its UK première at Birmingham Repertory Theatre from 15 – 30 March with a star cast led by Freddie Fox as Edmond Rostand, alongside Henry Goodman as Constant Coquelin, Josie Lawrence as Sarah Bernhardt and Chizzy Akudolu as Maria.

This English language première has a new translation by Jeremy Sams and is directed by the current Artistic Director of Birmingham Rep, Roxana Silbert. 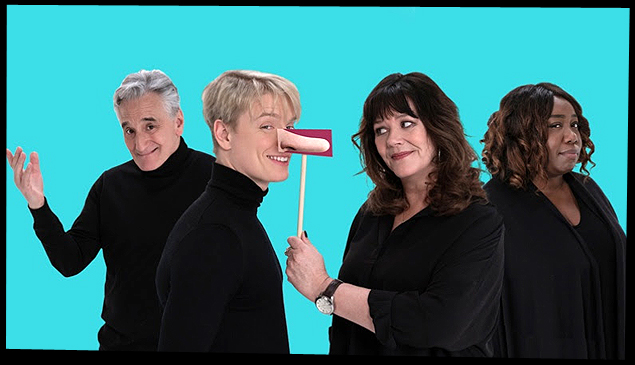 Edmond de Bergerac is the hilarious story behind Cyrano de Bergerac. Set in Paris in 1897, playwright Edmond Rostand (Freddie Fox) is approaching his thirtieth birthday with no new plays but a whole lot of worries. He has not written anything in two years and in desperation has promised a new play to the acting superstar, Constant Coquelin (Henry Goodman).

A desperate Edmond draws on his problems to write a new comedy. It will be an unbelievable tale about the demands of his producers, the whims of the actresses, the jealousy of his wife, his doubting colleagues and the romantic adventures of his best friend. It shall be called Cyrano de Bergerac!

The original production of Edmond continues to play to packed houses in Paris at the Theatre du Palais-Royale.

Alexis Michalik will receive two UK premières of his work this season. Alongside Edmond de Bergerac at Birmingham Rep and on tour, Intra Muros will open at the Park Theatre, London from 3 April – 4 May, directed by Ché Walker. Michalik is an author, actor and director with previous writing credits including Le Porteur d’Histoire which has run for over 1500 performances to date and played around the world, as well as Le Cercle Des Illusionnistes. For these two pieces, Michalik received the Beaumarchais du Figaro Prize, the Jeune Théâtre de l’Académie Française Award and two coveted Molière Awards. He wrote and directed Edmond in 2016, winning five Molière Awards, having just celebrated its 800th performance in Paris and recently released as a feature film. Intra Muros is his most recent work, having opened in Paris, 2017 at the Théâtre 13 before transferring to the larger Théâtre La Pépinière, where it continues to sell out today.

Edmond de Bergerac will be designed by Robert Innes Hopkins. The movement director is Liam Steel and the composer is Dave Price. Sound design is by Dan Hoole and lighting design by Rick Fisher. Voice director is Stephen Kemble, casting director is Amy Ball and Jack McMahon is the assistant director.

Produced in association with Nicolas Talar.

Improvisation credits include: 9 series of Whose Line Is It Anyway?, A Word in Your Era: Trust Us With Your Life, The Masterson Inheritance (Radio 4); The Lawrence Sweeney Mix (Radio 4); Whose Line Is It Anyway? 2015 (The Adelphi) and 2016 (London Palladium). Since 1985 Josie has been a member of The Comedy Store Players based at London’s famous Comedy Store. They are in The Guinness Book of World Records as the longest running comedy group. In 2016 Josie created the all female Impro group The Glenda J Collective.

Writing credits include: Shorts Life’s A Bitch, 5 Minutes and Weave Wars (Don’t Give Up Your Day Job Productions) and rehearsed reading The Rec Room (Soho Theatre).

Chizzy is also a regular panellist on Loose Women and was a contestant on the 15th series of Strictly Come Dancing.

PLAYWRIGHT | ALEXIS MICHALIK
Alexis Michalik is a French actor, author and director, the son of a French artist of Polish origin and a British translator. It was in the role of Romeo that Alexis took his first steps on the stage, in 2001, in Juliette and Roméo directed by Irina Brook, at the Théâtre de Chaillot, Paris.

Having won a place at CNSAD in Paris in 2003, he decided not to attend, and instead staged hsi first show, UNE FOLLE JOURNÉE (A Crazy Day) a free adaptation of the Marriage of Figaro by Beaumarchais, which opened in 2005 at Avignon Off festival.

In 2006, he wrote and staged LA MÉGERE À PEU PRES APPRIVOISÉE (The Quasi Taming of the Shew) in Avignon, an adaptation of Shakespeare's THE TAMING OF THE SHREW, a musical version, in which he played the role Petrucco. The show ran for 5 years with over 300 performances. In 2008, he created R&J, an adaptation for three actors of Shakespeare's ROME AND JULIET, in which he played, among other parts, Romeo. The play was performed nearly 400 times. In 2010, he adapted and staged CARMEN ROCK & SOUL OPERA featuring the singers Julie Zentatti and Christophe Mali, and about 20 actors, singers, dancers, and musicians, at the Ciné 13 Théâtre, Paris.

In 2011, he wrote his first play LE PORTEUR D’HISTOIRE (The Historyteller), which met with tremendous critical and public success. It is still running today and clocked up more than 2000 performances. In January 2014, he wrote and directed his second play, LE CERCLE DES ILLUSIONNISTES (The Circle of Illusionists) at the Théâtre de La Pépinière, Paris. The play combines fiction and biographical narrative about the illusionist Robert-Houdin and the film-maker Georges Méliès. It is still running today with over 600 performances to its credit so far.

Both Le Porteur and Le Cercle were nominated at the Molières 2014 (France’s top theatre award) in the categories of Best Play, Best Author, and Best Director. Alexis won two Molières: Author and Director. Jeanne Arènes also won Best Upcoming Actress Award for her performance in The Circle. In September 2016, he wrote and directed EDMOND at the Théâtre du Palais-Royal, a play about the difficult birth of Cyrano De Bergerac, the play written by Edmond Rostand. Edmond has been sold out since the opening night and has just celebrated its 800th performance.

Alexis Michalik is also an actor. He has appeared in over 40 films, TV movies and series.

He has just directed his first full-length feature film, EDMOND, based on his own play, soon to be released.

As composer, he has written, arranged and directed music for over 50 shows for theatre, TV and radio, including: The Wind In The Willows and Arcadia (National Theatre); The Merry Wives Of Windsor (Royal Shakespeare Company); The Mother (BBC); Enduring Love (Pathé), for which he won the Ivor Novello Award for Best Film Score, and Jane Austen’s Persuasion (BBC Films), for which he won a BAFTA.

As adaptor, his credits include the book of the musical Chitty Chitty Bang Bang (London & New York – Olivier nominated).

He wrote and devised The Enchanted Island for the Metropolitan Opera, New York

DIRECTOR | ROXANA SILBERT
Roxana Silbert is Artistic Director of Birmingham Repertory Theatre and was previously an Associate Director of the Royal Shakespeare Company.

Birmingham Repertory Theatre credits include: Woyzeck (in association with Birmingham International Dance Festival 2018); What Shadows, The Government Inspector (in association with Ramps On The Moon/UK Tour); Anita And Me (with Theatre Royal Stratford East); The King’s Speech (with Chichester Festival Theatre/UK Tour); Of Mice And Men; Khandan (Family) (with Royal Court); Dunsinane (National Theatre of Scotland/Royal Shakespeare Company); A Life Of Galileo (with Royal Shakespeare Company and Bath Theatre Royal) and Tartuffe.