Producer Mike Rogers is proud to announce that his first independent feature will have its World Premiere at Raindance 2017.  This is Japan’s first ever rock ’n' roll ghost comedy movie – a stunning combination of live action, rock n roll and Tokyo Japan’s underground scene.

Ghostroads - A Japanese Rock n Roll Ghost Story is about a struggling rock musician who dreams of success. He meets a ghost who helps him to write the perfect song. But the ghost wants a trade. Just how high a price is our would-be rock star prepared to pay for fame and immortality?

Ghostroads features Japan’s best garage, underground and beat bands, including The Neatbeats (the Japanese Beatles); The Privates (Japan’s answer to the Buzzcocks) and The 50 Kaitenz (The Japanese Ramones) and features legendary DJ Rodney Bingenheimer as ‘himself’ (Formerly KROQ Los Angeles - currently Little Steven's Garage on Sirius Radio) and Darrell Harris as ‘the ghost’... 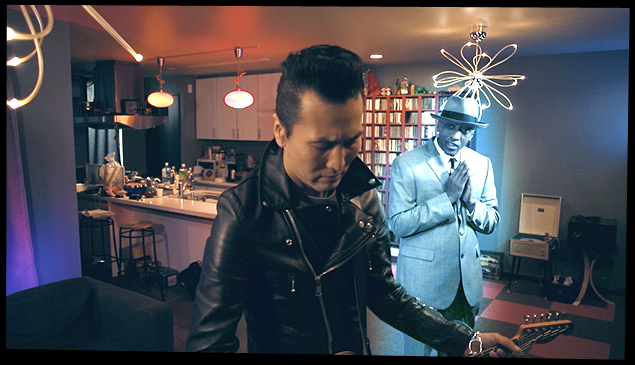 The Screamin' Telstars are a Japanese retro rock band fronted by Tony (Mr. Pan - leader of The Neatbeats who are considered one of Japan’s most respected musicians in Japan’s top underground band). The band has been playing together for years but has never met with any real commercial success. One day, Tony's amp blows up and he goes to buy a new one at a guitar shop with a mysterious owner. Unbeknown to Tony, the amp has a history behind it, and from it comes a ghost who promises fame and immortality in return for a sacrifice: namely getting rid of his band - forever. The ghost also promises Tony stardom greater than his old rival from his student days, the ‘rock god’ Shinzo, but will he pay the price?

Produced/written and co-directed by Mike Rogers, directed by Enrico Cucci.

About Ghostroads - A Japanese Rock n Roll Ghost Story
Perhaps, amusingly, for a hundred years, many Japanese people believe that since TV and radio stations consume huge amounts of electricity, that master control rooms  (especially the very old ones) are haunted and that spirits are attracted to the high energy. Staff members have told us they have seen strange things at broadcasting stations, and have known people to quit after working the graveyard shift. Of course, we find this ghost and spirits stuff just plain silly and complete nonsense, but as Mark Twain once said: “I don’t believe in ghosts....but I sure am afraid of them.”

Cast (In order of appearance)

Shinzo - Tatsuji Nobuhara
Tatsuji Nobuhara has been a rock n roll legend in Japan since the 1980s. He is the leader of ‘The Privates ,’ one of Japan’s most famous bands and still performing today with the original members. Tatsuji Nobuhara is considered a “Rock God” in Japan to this very day.

Mr. Chang - Taka Shin-Okubo
Taka Shin-Okubo is a stage actor who has successfully made the transition to TV and movies. He often plays a demon or a samurai. His latest work “Attack on Titan” is a smash success in Japan.Peanut Butter - Darrell Harris (The Ghost)Darrell Harris is a seasoned performer and professional radio DJ and MC. He also played a soldier in the post-war drama entitled “Habu to Genkotsu” (Snake & Bloody Fist).

Groupie - Mina Shirakawa
Mina Shirakawa is one of Japan’s top pinup girls. She has released two bathing suit DVDs that have made her one of the most popular pin-up girls in Japan. She has also appeared on hundreds of TV shows and was also the co-host of Ninja Slayer’s “The TV Show” which garnered more than 10 million views in six months.

Burlesque Dancer - Miwa Rock
Miwa Rock is one of Tokyo’s top burlesque performers packing stages all over Japan. She is also a pin up model, illustrator and plays bass for the all-girls rockabilly band, “The Tassels.” She has appeared in many magazines and publications for hot rod cars and motorcycles.

Danny (as himself)
Danny is the leader of the 50 Kaitenz who are also known as the Japanese Ramones. They are popular in Japan as well as Europe and have even performed at CBGBs in New York. Danny also played a major role in the Japanese horror movie, “Zombie Ass - The Toilet of the Dead.”

Director/Post Production Enrico Ciccu
Enrico Ciccu is an award winning director who hails from Sardinia, Italy and now lives in Tokyo, Japan. He has won several awards for various projects and short movies (including an Official Selection at the 2013 Sapporo Short Film Festival) as director, editor, post producer and colour correction.

Producer/Sceenplay/Co-director Mike Rogers
Mike has been a professional music/TV/radio/anime-related program producer in Japan since the eighties. He began in the music business in 1977 as lead vocalist with the legendary Los Angeles Punk Band “The Rotters” (Sit on My Face Stevie Nix.). As a university student, he assisted the legendary Rodney Bingenheimer (Rodney on the ROQ – KROQ Los Angeles from 1980 ~ 1981.) Mike was the first and only foreigner in Japanese history to become the General Manager of a major Japanese broadcasting station (TV Tokyo owned InterFM). Has produced a few smash hit programs (some real losers, too!) and several of Tokyo’s highest rated and most famous radio programs. A recent hit program “The TV Show” (Set Program with “Ninja Slayer”) garnered over 10 million viewers.  He is currently producing and hosting “WTF?” the hugely popular Sunday live show on InterFM 89.7

Co-Producer/Co-director/Editor/Sound designer Ken Nishikawa
Ken Nishikawa is a radio presenter, radio/TV director and translator. He worked for the BBC in London in the 90’s. He further worked with most of major radio stations in Tokyo area. He was also a presenter of a popular weekly music programme on Alpha Station, a Kyoto-based terrestrial FM station, for 13 years. Ken has just finished his feature documentary named “Matsuchiyo – Life of a Geisha”.