Music icon Katy Perry previewed an all-original new song “Immortal Flame” for FINAL FANTASY® BRAVE EXVIUS®, the hit FINAL FANTASY mobile game from Square Enix Ltd. As part of this collaboration, Katy Perry will also lend her likeness to the game. By participating in the in-game event on 12th December, all players will be able to obtain ‘Popstar Katy’. This character, featuring Perry’s pixel design in a red costume, is an iconic look from her performances during her “Witness” concert tour. Additionally, other character designs featuring Perry in her other attire will be available in future in-game events. 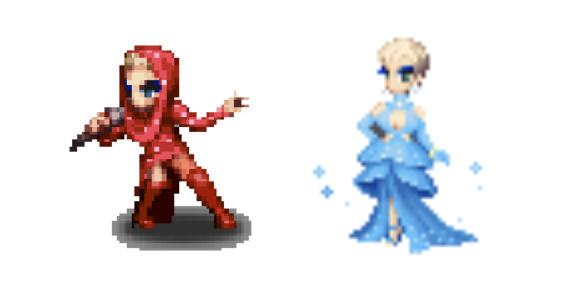 The internationally renowned superstar also made an on-stage appearance this past weekend at the “FFBE Fan Festa 2018” global fan event in Long Beach, California, commemorating the second year of service of  FINAL FANTASY BRAVE EXVIUS.

More details around the collaboration will be revealed at a later time.

About Katy Perry
Katy made her Capitol Records debut with 2008’s One of the Boys after signing to the label in 2007. She cemented her status as a global superstar with the follow-up album, Teenage Dream (2010), which made her the only female artist (tied with Michael Jackson) to have five No. 1 singles from one album on the Billboard Hot 100 chart ("California Gurls," "Teenage Dream," "Firework," "E.T." and "Last Friday Night"). PRISM, her 2013 album, debuted at No. 1 on iTunes in 100 countries and has sold more than 12.5 million adjusted albums worldwide. With the singles “Roar," “Firework,” and “Dark Horse” each surpassing the 10 million threshold including song sales and streams, Katy is the only female artist to earn three RIAA Digital Single Diamond Awards. In her 10 years with Capitol, she has racked up a cumulative 30+ billion streams alongside worldwide sales of more than 43+ million adjusted albums and 133+ million tracks. Katy’s 2015 Super Bowl performance is the highest-rated in the event’s history. She is the most-followed person globally on Twitter, and the first to surpass 100 million followers.

Katy Perry’s fourth studio album, WITNESS, debuted in June at No. 1 on the Billboard Top 200, and No. 1 on iTunes in 46 countries. The certified Platinum lead single, “Chained To The Rhythm,” has over 1 billion streams worldwide, views on the accompanying video made her the most-viewed female artist on VEVO. Follow-up singles, “Bon Appetit” (whose music video was Katy’s fastest viewed music video of all time, with 14.2 million views in the first 24 hours) is certified Gold, and “Swish Swish” is now certified Platinum.

About FINAL FANTASY Portal App
The free-to-download FINAL FANTASY Portal App® provides the latest and greatest on all things FINAL FANTASY, as well as exclusive promotional trailers and developer commentary. By logging-in with their Square Enix account, players can accumulate points that can be exchanged for various items. Also, the iconic Triple Triad® card game from FINAL FANTASY VIII™ makes its mobile debut, and is playable in the app.

About gumi Inc.
Founded in 2007, gumi Inc. (Tokyo Stock Exchange: 3903) is a leading global mobile game publisher and developer headquartered in Japan, with overseas operations in France, Korea, Singapore, Taiwan and the United States. The company has proven success in launching titles worldwide, such as the widely popular role-playing games Brave Frontier and THE ALCHEMIST CODE. In 2016, gumi established a Silicon Valley-based investment group with partners, called The Venture Reality Fund, which focuses on seed and early stage augmented reality and virtual reality startups. Its VR incubation subsidiaries have expanded globally, including Tokyo XR Startups, Seoul XR Startups, and Nordic XR Startups. In 2018, the company launched gumi Cryptos, an investment arm in blockchain technology and cryptocurrency funds. With ongoing publishing and development projects on a wide array of mobile, AR and VR platforms, gumi aims to change the world through innovative entertainment products and services, including both original content and collaborations with popular IP. For more information, please visit http://www.gu3.co.jp/en/.