The Big Little Lies and True Blood actor appears in the satirical Eat a Swede film which aims to spark debate and discussion about sustainability and feeding the world’s growing population, which is expected to increase from 7.8bn to 10bn by 2050. Campaigners believe extensive and urgent changes in food production are required if we want to meet food needs while protecting the Earth’s resources.

The sinister fiction follows Erik Karlsson, a Swedish entrepreneur and scientist, who believes the best protein for humans would be made with flesh grown from cells of the blue-eyed Stockholm-born heart throb Alexander Skarsgard. In his clumsy but determined attempts to launch ‘Swedes’ as the new meat, we see shock, confusion and revulsion from focus groups and investors alike when they TRY what they believe to be human lab-grown meat. 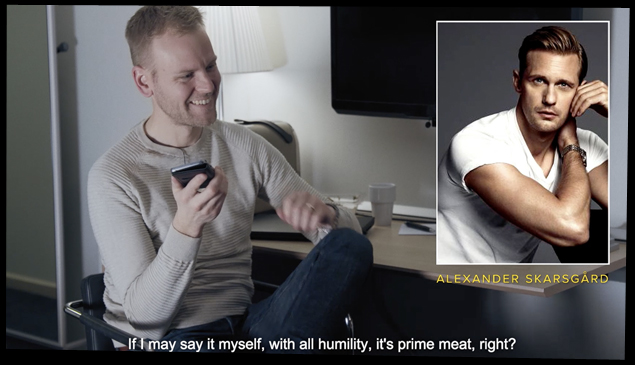 The climax of the film sees Karlsson ring Skarsgard to suggest cultivating his flesh for consumers to enjoy. After admitting that he is “prime meat” and initially suggesting $100 million for some of his “fresh cells”, Skarsgard shrugs it off as a joke but agrees to call back for more information. The final moments of the documentary style film direct the viewer to the site eataswede.com.

Eat a Swede was created by The Swedish Food Federation to highlight an urgent global challenge: how do we produce food for an additional 2000 million people without wrecking the planet? And while we’re not ready to eat ‘human’ lab-grown meat just yet, the Federation, which represents 800 food and drink companies in Sweden, say there are other, more conventional ways that we can make enough high quality, nutritious food for everyone in a sustainable fashion.

On eataswede.com, The Federation gives concrete examples of how well-known Swedish food companies such as Arla, The Absolut Company and Oatly are well on their way to making the shift to sustainable production. The site also lists facts about Swedish food production, including that they have the lowest use of antibiotics in the EU, that the energy they use is 99 percent fossil free and that they have reduced industrial food waste down to only 3 percent.

The Federation Chairman Lars Appelqvist says that whilst the Swedish food industry does not have all the answers, they believe they have some of them “Our companies are at the forefront of sustainable production, and many of our practices can be copied by producers around the world. But we also want to be inspired by other countries and industries and get new ideas on how we can become even more sustainable at home. With 'Eat a Swede', we want to raise this issue with politicians, business and the general public so that we can make the transition to sustainable production a reality before it’s too late.”

No time to (food)waste
The Federation also says that there’s quite a lot we can do as consumers. One of the most effective things is to reduce our food waste.

One third of all the food that’s produced is lost or wasted, most of it in the home, to a value of 1 trillion US dollars a year. If food waste were a country, it would be the third largest greenhouse gas emitter, behind China and the United States. According to the Federation, reducing food waste is easy, and it’s good for both the climate and your wallet.

Here are some tips:

Lars Appelqvist is realistic but optimistic about the future: “There is no magic bullet, quick fix solution that will make global food production sustainable overnight. For the Swedish food industry, it’s taken years and years of countless, incremental changes that in the end have resulted in large improvements. But now we don’t have that kind of time anymore. So we hope that by sharing our methods and techniques that we can help other countries speed up their shift to sustainable production. So don’t eat a Swede, just produce like one.”

The viral film, Eat a Swede, is available to watch here.