Interactive mosaic image features a zoom function that allows viewers to look up close at each individual picture that collectively make up a gigantic image of Thomas, The Fat Controller and Royal engine Duchess

Findings of a nationwide survey by Thomas & Friends reveals that the formula for the perfect friendship is a mix of trust, loyalty and listening to each other

Thomas & Friends has today unveiled a stunning new digital artwork by renowned artist Nathan Wyburn to celebrate this year’s International Friendship Day on 30th July. The interactive mosaic image is comprised of over 350 pictures made by children from around the UK of themselves with their friends which they drew on their return to nursery and pre-school earlier this month.

In what is being dubbed as ‘the world’s friendliest piece of artwork,’ the International Friendship Day Picture is based on a poster image of ‘Thomas & Friends: The Royal Engine’, the episode which aired earlier this year as part of the brand’s 75th Anniversary celebrations. The successful 22-mins special featured an introduction from Harry, the Duke of Sussex and starred actress Rosamund Pike as the voice of royal engine Duchess and now has its own toy line available to buy in shops and online. 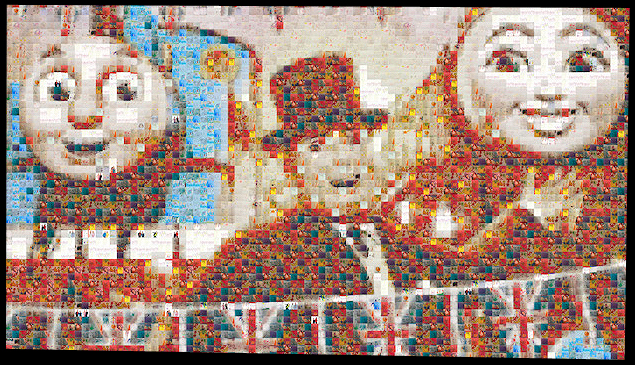 Artist Nathan Wyburn says “I’ve used more than 350 images drawn by children across the UK to make a unique piece of digital art depicting the importance of friendship. It’s been great to see so many pieces of colourful and creative artwork. I have to say, working on this picture, has really put a smile on my face so I hope the finished piece does the same to everyone who sees it.”

Taking a close-up look at the super-sized picture, which can be done by using the special built-in zoom feature, reveals some famous faces amongst the crowd. Ant & Dec, Phillip Schofield and Holly Willoughby, Stormzy and Ed Sheeran, Amanda Holden and Alesha Dixon, are amongst those to be featured in the image after their friendships were voted as some of the nation’s favourite. The question is – can you find them amongst the hundreds of other drawings?

Daniel Crisp, an official Thomas & Friends illustrator, has produced the celebrity images for the picture in the same style as the books which accompany the much-loved TV series. In a must-see celebrity compilation image that he has made for the picture, Daniel has imagined what a day out on the Island of Sodor, the fictional home of Thomas, might look like with celeb buddies meeting Thomas and Percy. Amongst others, Tess Daly and Claudia Winkelman, Geri Horner and Emma Bunton, Idris Elba and The Rock and Mel and Sue rubbing shoulders with the loveable engines on the railway turntable at Tidmouth Sheds. 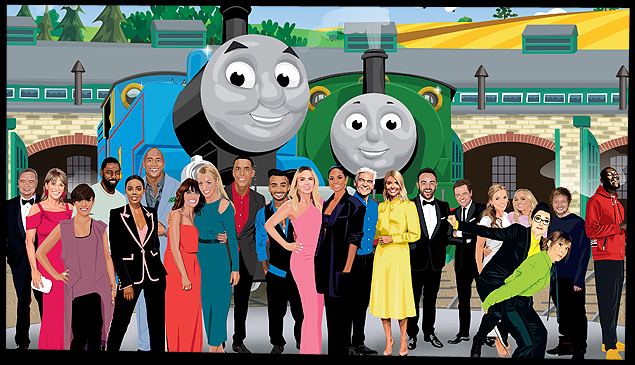 Claudia Caron, Marketing Manager at Mattel, said “In this special 75th anniversary year for Thomas & Friends, we are celebrating friendship in as many ways as possible. This includes taking a look at what it means to be a good friend and how we can nurture these important relationships, so they bring us a lifetime of joy and happiness. We know how difficult it has been for children not being able to see their friends recently, so we wanted to commission this very special artwork made up of all their pictures to immortalise these special friendships, and to raise a smile amongst everyone who sees it during these challenging times.”

The unveiling of the ‘Friendship Day Picture’ coincides with research released today by Thomas & Friends which reveals the formula to a perfect friendship is a mix of trust, loyalty and listening to each other. Going through tough times with someone, being able to pick up where you left off despite not seeing them for months and getting honest opinions were also key components to the perfect friendship.

The study of 1,000 parents with children aged up to five also revealed nearly a quarter of their friends were people they knew before they turned five. And six in 10 said the friends they've known the longest are the ones they trust the most. The study also revealed adults are still in regular contact with an average of two friends they met in either primary or preschool.

Those who are envious of other people's friendships most admire trust, loyalty and the fact they always help each other out. Listening to each other, being there for one another and a shared sense of humour were other traits they admire. But when it comes to best friends, parents have been selective over the years, with only two friends gaining the coveted status. 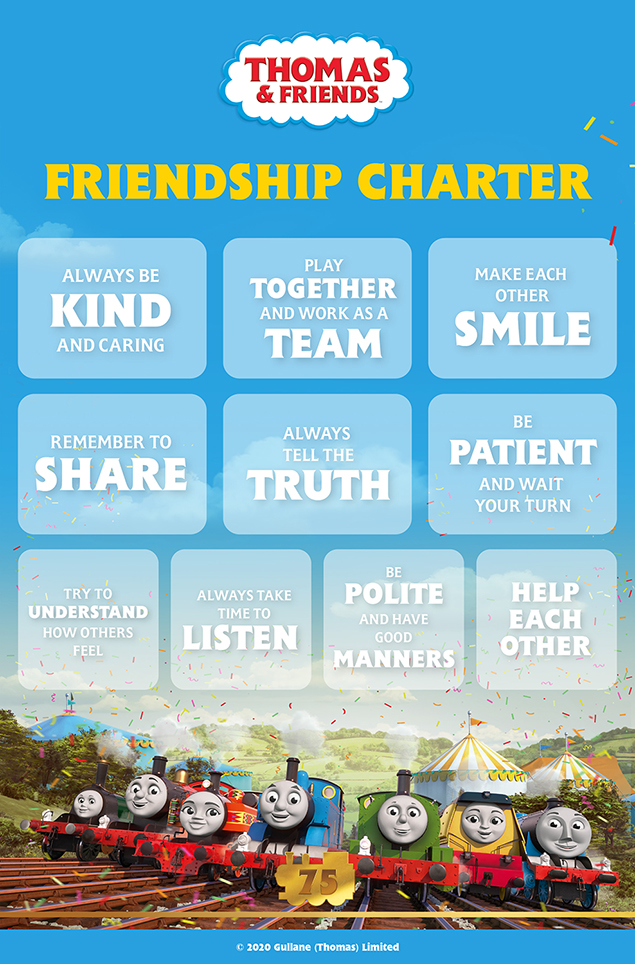 One in 10 would usually see their best friends daily, with more than a third seeing them once a week and 27 per cent meeting up with them on a monthly basis. More than a quarter (28 per cent) see those they share the closest bonds with less than every three months, with some seeing them less than once a year. Interestingly, 38 per cent of respondents said they used the time of the lockdown to get in touch with old friends they haven't spoken to in some time.

When it comes to celebrity relationships, Ant and Dec were identified as the nation’s best-known, closely followed by Holly Willoughby and Philip Schofield.

Thomas & Friends producers looked at the most recurrent friendship themes and life stretching back 75 years and covering over 550 different episodes to help draw up the ‘Thomas & Friends Friendship Charter’ also released today as part of the day’s activity.

CAN YOU FIND THESE CELEBRITY FRIENDSHIPS HIDDEN IN THE IMAGE?

1.      Being honest with each other e.g. if they ask for your opinion on something
2.      They've been with you through the toughest of times
3.      If you don't see each other for 6 months or a year you still pick up exactly where you left
4.      They never judge you
5.      Not feeling bad if you ask for a favour
6.      They're the person you'd call at any time if you had an emergency
7.      They're the person you confide in about anything
8.      You're totally honest with each other, whether its clothes, shoes, relationship woes
9.      You have inside jokes with one another
10.   You think of them like a sister/brother
11.   You would trust them with your phone if you had to leave it with them unlocked
12.   You're not counting who owes how much to whom
13.   Knowing how they take their tea without asking
14.   Your kids are also friends
15.   People see you as a pair
16.   You know their birthday / their parents' birthdays
17.   You know their address off by heart / you could drive to theirs without using your sat nav
18.   You've met their grandparents/family members other than their parents
19.   You're on first name terms with all their family members
20.   You know their entire romantic back story better than their partner does

About Mattel
Mattel is a leading global children’s entertainment company that specializes in design and production of quality toys and consumer products. We create innovative products and experiences that inspire, entertain and develop children through play. We engage consumers through our portfolio of iconic franchises, including Barbie®, Hot Wheels®, American Girl®, Fisher-Price®, Thomas & Friends® and MEGA®, as well as other popular brands that we own or license in partnership with global entertainment companies. Our offerings include film and television content, gaming, music and live events. We operate in 40 locations and sell products in more than 150 countries in collaboration with the world’s leading retail and technology companies. Since its founding in 1945, Mattel is proud to be a trusted partner in exploring the wonder of childhood and empowering kids to reach their full potential.