FULL CASTING IS ANNOUNCED FOR LONDON AND AUTUMN TOUR

NEW DATES ADDED: THE SHOW WILL VISIT BIRMINGHAM, OXFORD, INVERNESS, EDINBURGH, SOUTHAMPTON AND LEEDS AFTER THE SUMMER SEASON AT THE ROUNDHOUSE

FADES, BRAIDS & IDENTITY– AN ACCOMPANYING PROGRAMME OF EVENTS WILL TAKE PLACE AT THE ROUNDHOUSE THROUGHOUT THE SEASON (18 JULY – 24 AUGUST), INCLUDING PHOTOGRAPHY, FILM, POETRY AND HAIRCUTS

Inua Ellams’ hit play Barber Shop Chronicles today marks its 250th performance by announcing new autumn dates and a special programme of work Fades, Braids & Identity which will run alongside the season at the Roundhouse in London, opening in nine weeks. The overwhelmingly successful Barber Shop Chronicles returns to London for the first time since its premiere in 2017, playing two sold out runs at the National Theatre and acclaimed performances at Leeds Playhouse. It has subsequently toured across Australia, New Zealand, the United States of America and Canada.

Featuring work from the creators of Hot Brown Honey, Selina Thompson, Ruth Sutoyé, and Julian Knox as well as a resident barber from Hackney’s renowned SliderCuts, Fades, Braids & Identity champions the stories of Black and Brown artists, exploring and expanding on the themes of the play, from race, gender and identity to the importance and politics of Black hair culture.

This season of events will present acclaimed artists alongside emerging talent to engage with new audiences and to open new conversations reflecting the themes Inua Ellams explores in Barber Shop Chronicles.

Much of the work focuses on the voices of femmes of colour; Hive City Legacy is an unapologetic satire bringing together redefined narratives and social activism to confront Femme experiences across race, sexuality and mental health, Bald Black Girl(s) looks at the experiences of bald black women and their own relationship with barbers and Selina Thompson presents Race Cards, inviting audiences to ask her questions about race. Inua will also present his well-established spoken word and hip-hop night R.A.P. Party on 11th August. Throughout Fades, Braids & Identity, the Roundhouse will also welcome a collection of African Fusion Food pop-ups blending Nigerian, Ghanaian and South African cuisines. Full details of the programme can be found below.

The current national tour of Inua Ellams’ play Barber Shop Chronicles will reach further regional audiences across the UK with new Autumn dates now added. Working closely with a national partnership of venues, Barber Shop Chronicles will visit Birmingham and Leeds as well as the first Scottish dates for the production in Edinburgh and Inverness, supported by the National Lottery through Creative Scotland. Funding from both Creative Scotland and Arts Council England is helping the production to attract new, young and diverse audiences with 10% of all available tickets across the entire tour made available for free via local engagement initiatives aimed at young people, refugees and people with experiences of the criminal justice system and others who traditionally wouldn’t attend theatre performances. Full tour listings can be found below.

The cast for both the Roundhouse and autumn tour has also been announced featuring: existing cast members Maynard Eziashi, Adé Dee Haastrup, Emmanuel Ighodaro, Demmy Ladipo, Mohammed Mansaray, Anthony Ofoegbu, David Webber, and incoming cast members Micah Balfour, Okorie Chukwu, Tom Moutchi, Elmi Rashid Elmi, and Eric Shango. Both Maynard and David have been with the show since the world premiere at the National Theatre in 2017.

Barber Shop Chronicles is a Fuel, National Theatre and Leeds Playhouse co-production in association with the Roundhouse.

Co-commissioned by Fuel and the National Theatre. Development funded by Arts Council England with the support of Fuel, National Theatre, Leeds Playhouse, The Binks Trust, British Council ZA, Òran Mór and A Play, a Pie and a Pint. 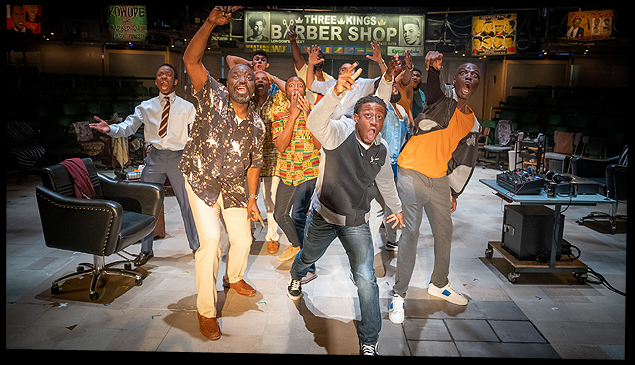 MAYNARD EZIASHI is the winner of the Silver Bear Award for Best Actor at the 41st Berlin International Film Festival in 1991 for Mister Johnson, starring alongside Pierce Brosnan.

TOM MOUTCHI is an actor, comedian and writer. He trained at the Identity School of Acting and in 2016, he was nominated for a Screen Nation Award for Favourite Online comedian. His recent theatre credits include: Twitstorm (Park Theatre). Some of his screen credits include: Famalam (BBC), The Hustle (MGM), Random Acts (Channel 4), Pls Like Me, All Star Driving School, Hot Pepper, Raison d’etre and Pypo.

ELMI RASHID ELMI trained at both the London College of Music and the Identity School of Acting, 1 year, 2015-2016. Whilst in training he performed in: Romeo & Juliet, Sing Yer Heart Out for The Lads, Measure for Measure, Richard III, The Country Wife, Hedda Gabler and Birdland. His other theatre credits include: Wild Men (Tin Forest Festival), The Grandfathers (National Theatre) and Bassett (Bristol Old Vic).

ERIC SHANGO recently graduated from Mountview Academy of Theatre Arts. His theatre credits whilst in training include: Chicken Soup with Barley, Punk Rock, The House of Blue Leaves, The Two Gentlemen of Verona and On the Shore of the Wide World.

BARBER SHOP CHRONICLES AT THE ROUNDHOUSE
FADES, BRAIDS & IDENTITY
This Summer the Roundhouse champions the work of Black and Brown artists. Barber Shop Chronicles comes to the venue’s iconic main space, along with the return of the fierce femmes of Hive City Legacy. Plus, a series of theatre, photography, film and spoken word that platforms a diverse range of voices exploring race, gender, identity and the importance and politics of Black hair culture. Not to mention a pop-up barber shop.

GLOBAL BLACK VOICES
Sat 10 Aug
Sackler Space
Following previous events at Arcola and RichMix focused on female, queer and Arab writers the Global Voices project comes to Roundhouse to present their first Global Black Voices. Showcasing excerpts of plays by black writers from around the globe never before staged in the UK. This event will be curated by Bridget Minamore.

INUA ELLAMS’ R.A.P. PARTY
Sun 11 Aug
Main Space (on Barber Shop set)
Inua’s well-established night which commissions and platforms some of the most exciting spoken word artists to respond to Hip Hop tracks/albums with a soundtrack provided by resident DJ Sid Mercutio .The R.A.P. Party has previously been hosted at Southbank Centre, The British Library, Shoreditch House and internationally in Nigeria, Ireland and Brazil.

ROOTS FOR A CROWN: Screening and Q&A
Tue 20 Aug
Sackler Space
Julian Knox is a poet, filmmaker and visual artist whose profile is on the rise thanks to recent commissions from Southbank Centre, The House of St Barnabas and Soho Radio. Julian will present his new film Roots for a Crown exploring identities and experiences of men with dreads in London.

About Fuel
Fuel produces an adventurous, playful and significant programme of work - live, digital, and across art forms – for a large and representative audience across the UK and beyond. They collaborate with outstanding artists with fresh perspectives and approaches who seek to explore our place in the world, expose our fears, understand our hopes for the future, create experiences which change us and in turn empower us to make change in the world around us. Led by Kate McGrath, Fuel is supported by Arts Council England as a National Portfolio Organisation, the Esmee Fairbairn Foundation, and Wellcome Trust through Sustaining Excellence.

Kate McGrath and Inua Ellams met in 2008, after Kate saw what became Inua’s first theatre show, The 14th Tale, at Battersea Arts Centre. Fuel helped Inua develop his debut play and produced it, premiering it at the Edinburgh Festival, winning a Fringe First, touring it in the UK and internationally and presenting it at the National Theatre. Since that first meeting, Fuel has worked closely with Inua, producing Untitled, Knight Watch, Long Song Goodbye, Black T-shirt Collection, The Spalding Suite, An Evening with an Immigrant, and now Barber Shop Chronicles. Fuel is also currently co-producing Inua’s Half-God of Rainfall with Kiln Theatre in association with Birmingham Rep, which is currently running at the Kiln Theatre, and Inua’s Three Sisters with The National Theatre, which will open in autumn 2019.

Also this year, in a far reaching and unique collaboration between arts organisations and Human Rights charities, Fuel will lead produce 7 days of celebration (24-30 June) to mark the 80th anniversary of the Universal Declaration of Human Rights, including a brand-new flag for Human Rights, designed by Ai Weiwei.

Other work from Fuel in 2019 has included UK and international tours of Touching the Void; Roy Alexander Weise and Nick Makoha’s The Dark; The Day I Fell Into a Book and Encounter Productions’ new show The Kids Are Alright which premiered at The Place and The Albany with an autumn tour to be announced.

About Leeds Playhouse
Leeds Playhouse has a reputation both nationally and internationally as a leading UK producing theatre. Evolving and regenerating over its 50year history the theatre has continued to be a cultural hub and artistic beacon for the North, a place where people gather to tell and share stories, and to engage in world class theatre. Leeds Playhouse makes work which is pioneering and relevant, seeking out the best artists to create inspirational theatre in the heart of Yorkshire. From large scale spectacles to intimate performance the Playhouse develops and makes work for the stage, found spaces, touring, schools and community venues. As dedicated collaborators, they work regularly with other organisations from across the UK, and some of the most distinctive, original voices in theatre today.

Through the Furnace programme, they develop work with established practitioners and find, nurture and support new voices. They cultivate artists by providing creative space for writers, directors, companies and individual theatre-makers to refine their practice at any stage of their career. The sector-leading Creative Engagement team work with over 10,000 people aged 0 - 95 every year through a range of weekly workshops and exciting creative projects offering a wide range of opportunities, reaching out to refugee communities, young people, students, older people and people with learning disabilities. At the Playhouse there is always a way to get involved.

About The National Theatre
The National Theatre’s mission is to make world class theatre that’s entertaining, challenging and inspiring – and to make it for everyone. It aims to reach the widest possible audience and to be as inclusive, diverse and national as possible with a broad range of productions that play in London, on tour around the UK, on Broadway and across the globe. The National Theatre's extensive UK-wide learning and participation programme supports young people’s creative education through performance and writing programmes like Connections, New Views and Let’s Play. Its major new initiative Public Acts creates extraordinary acts of theatre and community; the first Public Acts production was 2018’s Pericles. The National Theatre extends its reach through digital programmes including NT Live, which broadcasts some of the best of British theatre to over 2,500 venues in 65 countries, and the free streaming service On Demand In Schools, used by nearly 60% of UK state secondary schools. The National Theatre invests in the future of theatre by developing talent, creating bold new work and building audiences, partnering with a range of UK theatres and theatre companies.

About the Roundhouse
The Roundhouse is a hub of inspiration where artists and emerging talent create extraordinary work and where young people can grow creatively as individuals. The Roundhouse believes in the power of creativity to change lives. By giving young people the chance to engage with the arts through music, media and performance projects, the Roundhouse inspires them to reach further, dream bigger, and achieve more.

Each year, the Roundhouse gives thousands of 11–25-year-olds the chance to develop their skills and confidence through creativity – in music, media or the performing arts, helping them to find new perspectives, and new directions.

The Roundhouse is one of the most incredible live performance spaces in the world where the biggest names in music, theatre, circus and spoken word take to the stage every day. A former railway engine repair shed, the Grade II* listed building was transformed into a ground-breaking performing arts venue 50 years ago, welcoming legendary artists from all over the world to perform in its unique spaces.