Long before we learn to drive, we observe cars zip, zoom and fly in our favourite cartoon shows.

From the tip of an artist’s pencil, to the dreams of impressionable minds everywhere; sometimes it’s impossible to shake the impact an iconic cartoon car has.

To find out which iconic cartoon car has had the biggest impact, private reg company Click4reg.co.uk surveyed 2,424 European adults. The survey asked respondents to identify the cartoon car they’d describe as a “dream drive” and which, given the chance, they would take for a spin in real life! 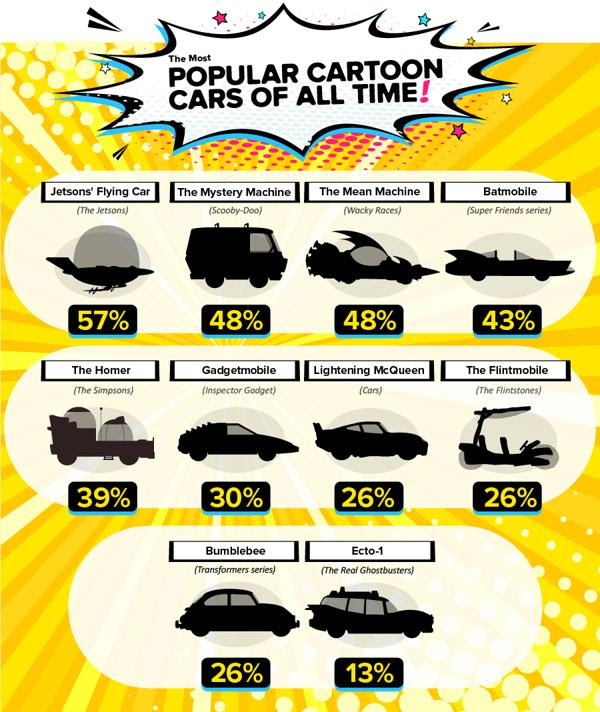 It seems the most iconic cartoon car is from American animated sitcom The Jetsons. Over half of Europeans (57%) chose the Jetsons’ Flying Car as their dream drive. Not a bad choice in today’s age. A flying car similar to the Jetsons’ would generate less air pollution and alleviate road congestion!

Next, it’s a tie between The Mystery Machine and The Mean Machine at 48% of the vote. Of course, The Mystery Machine is the main transportation of Mystery Inc. – teenage pals who solve mysteries alongside their talking Great Dane, Scooby-Doo. While The Mean Machine is a purple, rocket-powered car driven by the conniving Dick Dastardly in Wacky Races.

Of less interest is Lightening McQueen (26%), star of 2006 American animation Cars, The Flintmobile (26%), the main transportation of Fred Flintstone and family, and Bumblebee (26%) – a robot superhero at the forefront of the Transformers series.

Arguably, the least iconic car is Ecto-1 from The Real Ghostbusters. Just 13% of those surveyed would describe this car as a dream drive, which is disappointing for transport that is used to bust New York City ghosts and other entities!