‘Stylishly directed, beautifully acted and passionate drama'
'It’s about all our futures, after all’
The Independent

With the care system at the forefront of the public’s minds, as it creaks under the weight of an ageing population, lack of funding and staff and the devastation wrought by a global pandemic, a hard-hitting new drama, Help starring two of Britain’s most respected actors Stephen Graham and Jodie Comer, focuses on life in a care home during the early, dark days of Covid 19. This powerful film explores the moving bonds between carer and resident, and the struggle they must face in this unimaginable and unknown world.

Penned by BAFTA award-winner Jack Thorne (His Dark Materials, National Treasure) and directed by BAFTA-winning Marc Munden (The Third Day, Utopia) the drama is set for release on DVD and digital on 11 October 2021, from Acorn Media International, following its transmission on Channel 4 tomorrow.

Set in a Liverpool care home, we meet Sarah (Jodie Comer (Killing Eve, Doctor Foster), who, after many years of struggling to find work, has found her calling at Bright Sky Homes. Instantly connecting with the residents, she forms a special bond with Tony (Graham – Save Me, This is England), who is in his late 40s, with Early Onset Alzheimer’s. Sarah feels like she finally fits in and has a purpose, and the residents feel like they have someone that truly cares.

Then in March 2020, the Coronavirus pandemic hits, and everything is thrown into disarray. Unprepared and ill-equipped, Sarah and her colleagues fight tooth and nail to keep their vulnerable inhabitants safe, but it seems they’ve been all but abandoned by the powers that be.

A determined Sarah goes to extraordinary lengths to protect those in her care, whose conditions make their suffering and isolation even more traumatic. But the staff’s unwavering commitment, compassion and heroic efforts can only do so much, and Sarah is pushed into a dark corner, as she desperately searches for a way out. 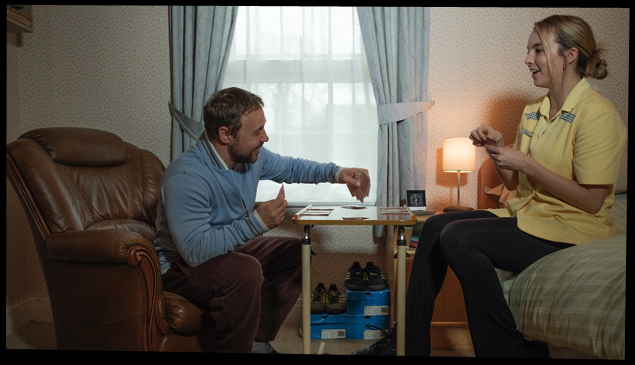 HELP is also available to download and keep on October 11

ABOUT ACORN MEDIA INTERNATIONAL
Acorn Media International is a division of AMC Networks, Inc. For over 30 years, Acorn has successfully managed and distributed best-selling dramas, mysteries and other series, including Line Of Duty, Doc Martin, Agatha Raisin, Midsomer Murders, Chernobyl, A Place To Call Home and many more. From broadcast to streaming, DVD to digital, Acorn effectively exploits content in all formats across all distribution channels, including direct-to-consumer via its proprietary SVOD channel, Acorn TV. Acorn optimizes the value of content by skilfully managing pricing, windowing and promotion. Acorn has offices in the US, UK and Australia and works with strategic partners to distribute to other territories around the globe.

ABOUT AMC NETWORKS
Known for its groundbreaking and celebrated original content, AMC Networks is the company behind the award-winning brands AMC, BBC AMERICA, IFC, SundanceTV, WE tv, and IFC Films. Its diverse line-up of popular and critically-acclaimed series and independent films include Killing Eve, Better Call Saul and The Walking Dead, which has been the #1 show on basic cable television for nine consecutive years, as well as Portlandia, Brockmire, Love After Lockup, and the films Boyhood, Death of Stalin, and many more. Its original series Mad Men and Breaking Bad are widely recognized as being among the most influential and acclaimed shows in the history of TV. The Company also operates AMC Studios, its production business; AMC Networks International, its international programming business; the subscription streaming services Shudder, Sundance Now; Acorn TV; and UMC (Urban Movie Channel); and Levity Entertainment Group, the Company’s production services and comedy venues business.