Kino Lorber Repertory is proud to announce the acquisition of all North American rights to the new 4K IndieCollect restoration of The Atomic Cafe, supervised by filmmakers Kevin Rafferty, Jayne Loader and Pierce Rafferty. Set to premiere at the 2018 SXSW Film Festival in Austin, TX, on Saturday, March 10, 2018, the newly-restored The Atomic Cafe will open in theaters nationwide during the summer––and receive a home media release during fall 2018.

Composed entirely of civil defence and propaganda films created by the U.S. military and other agencies, The Atomic Cafe exploded myths about nuclear weapons and landed the filmmakers on Late Night with David Letterman: see video below.

It created a sensation when it opened at the Film Forum in March 1982 and played around the country to capacity audiences, garnering extraordinary reviews, including from the New York Times, whose critic Vincent Canby called it "A stunner! Has one howling with laughter, horror and disbelief." 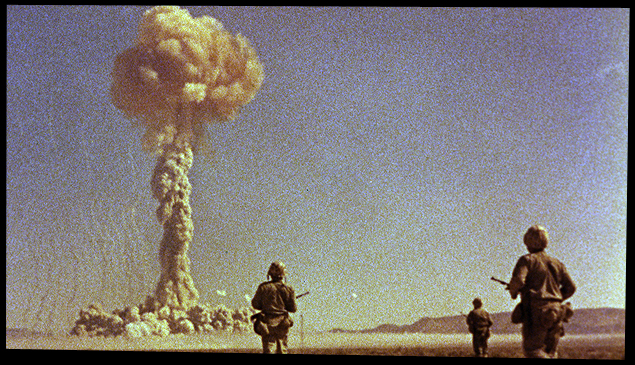 With the White House hurling threats to use nuclear weapons, The Atomic Cafe is the perfect movie for our time––a darkly funny meditation on Armageddon. Using our government’s own films, it pulls back the curtain to expose how Americans were taught to “stop worrying and love the bomb." A cute cartoon assures children that ducking under their desks will protect them from radiation. A U.S. Army officer asserts the atomic bomb is a beautiful sight “when viewed at a safe distance,” as we watch young soldiers running towards a mushroom cloud. With Cold War memes re-emerging in our public discourse, audiences will weep with laughter and pained recognition as they contemplate the deployment of “alternate facts,” then and now, to achieve a desired end.

“Kevin Rafferty, Jayne Loader and Pierce Rafferty have made a landmark film about the nuclear age that remains just as relevant and darkly comical today as it’s ever been,” wrote Kino Lorber CEO Richard Lorber. “We wish times were different. But at least we have The Atomic Cafe to expose the horrific prospect of the Armageddon with humor, style and historical perspective.”

The Atomic Cafe was deemed of such historic importance that it was named to the National Film Registry of the Library of Congress in 2016. This 4K digital restoration was created by IndieCollect, a New York-based non-profit organization that saves and restores American independent films so that they can be seen in state-of-the-art digital formats. Funding was provided by the National Film Preservation Board of the Library of Congress, administered through a grant from the Council on Library and Information Resources (CLIR).

Kevin Rafferty
Kevin Rafferty began making movies as an undergraduate at Harvard in the late 1960s. His feature documentaries include Hurry Tomorrow, The Atomic Cafe, Blood in the Face, Feed, The Last Cigarette and Harvard Beats Yale 29-29. He has done commissioned films for television and contributed his camera work to such filmmakers as Michael Moore (Roger and Me) and Chris Hegedus and D.A. Pennebaker (The War Room). He wrote a book for Overlook Press based on his movie also entitled “Harvard Beats Yale 29-29.”

Jayne Loader
Jayne Loader is the author of the novel “Between Pictures” and the short story collection “Wild America,” both published by Grove Press. She created the CD-ROM and website Public Shelter and WWWench, one of the first blogs, in 1995. In the 2000s, she and her husband, the astronomer Robert Kirshner, were the Masters of Quincy House at Harvard College. She lives in Portola Valley, California and Friendship, Maine.

Pierce Rafferty
Following the release of The Atomic Cafe in 1982, Pierce Rafferty co-founded Petrified Films, an independent stock footage library located in the Meat Market District, New York City. From 1984 to 1994, Petrified's holdings grew exponentially to include the stock footage libraries of Warner Bros. (pre-1951) and Columbia Pictures (pre-1965). In 1994, Petrified Films sold its collection of archival stock footage to Image Bank, a company later purchased by Getty Images. In 2002, Pierce moved to Fishers Island, NY, where he works as the director of the Henry L. Ferguson Museum.

About IndieCollect
IndieCollect’s mission is to rescue, restore and revive important American independent films so they can be seen now and in the future. Restorations in progress include Thank You and Goodnight, The War at Home, In the Soup, Cane River and The Believer. Its film restoration initiative is supported in part with funds from Just Films / Ford Foundation, Weissman Family Foundation, and Amazon Studios. It recently announced the launch of its Queer Cinema Index, in partnership with Outfest and the UCLA Film & Television Archive, an initiative to document all LGBTQ films and televisions programs made to date.

About Kino Lorber
With a library of 1,600 titles, Kino Lorber Inc. has been a leader in independent art house distribution for over 30 years, releasing over 25 films per year theatrically under its Kino Lorber, Kino Classics, and Alive Mind Cinema banners, with six Academy Award® nominated films in the last eight years, including Fire at Sea, directed by Gianfranco Rosi. In addition, the company brings over 250 titles each year to the home entertainment market through physical and digital media releases under its five house brands. It also now distributes a growing number of third party labels in all ancillary media and is a direct digital distributor to all major digital platforms including iTunes, Netflix, Hulu, Filmstruck, Tribeca Shortlist, Amazon, Vimeo, VHX, Fandor, Mubi and Others.