SHARE ON: +
02 April 2020
STARZPLAY Viewers Will Gain Access to Thousands of Hours of Programming with 7-Day Free Trial Before Opting Into £4.99 Monthly Subscription in UK
Starz, a Lionsgate company (NYSE: LGF.A, LGF.B), announced today that STARZPLAY, its international premium streaming service, is now available on Roku® streaming players and Roku TV™ models in the UK and Mexico. Consumers can sign up for a 7-day free trial before committing to a £4.99 monthly subscription in the UK and $3.99 in Mexico. 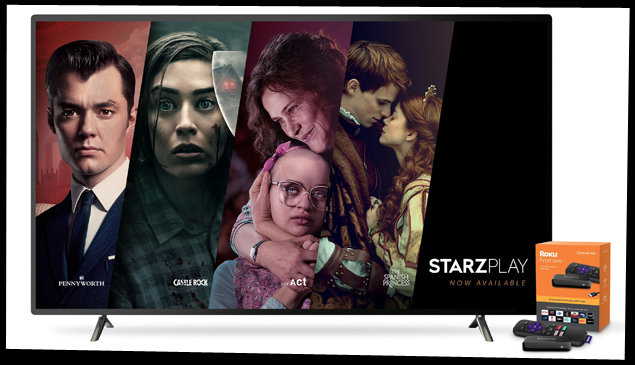 “Television viewers around the world continue to look for new ways to access premium content and this partnership ensures thousands of hours of exclusive STARZPLAY content is available to Roku users in Mexico and the UK,” said Superna Kalle, Executive Vice President, International Digital Networks for Starz. “We look forward to delivering STARZPLAY’s vast library of compelling series and films and a great user experience to an expanded customer base.”

”Starz is a popular entertainment destination on the Roku platform in the US and we are excited to bring their premium content to Roku users in UK and Mexico through its international streaming service,” said Yulia Poltorak, Director Content Distribution at Roku. “STARZPLAY is a great destination for consumers for watching popular movies and original productions such as Spartacus and The Spanish Princess.”
Find STARZPLAYonFacebook, Twitter andInstagram.

About STARZPLAY
Starz, a Lionsgate Company (NYSE: LGF.A, LGF.B), continues to grow its global footprint with its ongoing expansion of the STARZPLAY international premium streaming platform in a growing number of territories. The STARZPLAY premium streaming service gives subscribers the opportunity to watch STARZ premium content all in one place, with upcoming STARZ Originals airing exclusively on STARZPLAY day-and-date with the US. Available through its own direct to consumer STARZPLAY app, global digital broadcast services, multi-channel video distributors, telecommunications companies and other online and digital platforms, STARZPLAY offers subscribers access to STARZ Original series, premium movies and curated content focused on a global audience. STARZPLAY is currently available in Europe and Latin America on Apple TV, in France, Germany, Mexico and the UK on Amazon Prime Video channels and on the following local platforms: in Mexico on izzi, Totalplay and Roku streaming devices; in Spain on Orange and Vodafone; in the UK on Virgin Media and Roku streaming devices; and as Starz in Canada in alliance with Bell Media.

Roku and the Roku logo are registered trademarks and Roku TV is a trademark of Roku, Inc. in the U.S. and in other countries.