LISTEN UP: The Fan Carpet’s Camila Sayers Shares Her Thoughts on the First-Ever TEDxLondonWomen SHOWING UP Event | The Fan Carpet

LISTEN UP: The Fan Carpet’s Camila Sayers Shares Her Thoughts on the First-Ever TEDxLondonWomen SHOWING UP Event

Event turns the spotlight on diversity, inclusion and the next wave of feminism

I had the absolute pleasure of attending the first-ever TEDxLondonWomen ‘Showing Up’ event in London's Southbank Centre. Like many, I am very aware of the renowned TED events phenomena across the globe, devoted to spreading ideas through impactful talks. TEDx spreads the same idea and is a program of local, self-organised events that bring people together to share a TED-like experience, and I was in for such a treat.

This event in particular caught my eye as it was part of the Global TEDWomen programme, dedicated to sharing stories of women, non-binary and genderqueer people, 'Showing Up', pushing boundaries and speaking their truths. The whole experience was like being lifted up in every sense of the word, you were encouraged to truly be yourself and celebrate everything about yourself from the moment you stepped through the doors and filled out your name badge with your name and your own choice of gender pronoun.

This small but poignant gesture certainly inspired inclusion and diversity from the get go and to me, represented an understanding and supportive environment in which to be together and share experiences.

This theme of diversity and inclusion seeped through to the people involved too, the incredible team at the event palpably showed the true passion for the work they are doing.

The day was filled with sublime speakers, including and ranging from Material scientist and vocal LGBTQI+ campaigner, Dr. Clara Barker to Stand-up comedian, author, podcaster and fat activist, Sofie Hagen to Campaigner against toxic masculinity, Ben Hurst (please check out details of speakers and performers below). Whether or not the field in which the speaker was specialised in, related directly to my interests or not, I was fully invested. In each speech the same narrative was present: we can create change in our society, to build the future we hope to have, through inclusion, understanding, educating and pushing boundaries.

In between the speakers there were breaks in which the careful planning from the TEDx team was once again shown, there was the very insightful 'With and for Girls Exhibition' hosted by the The With and For Girls Collective which featured 38 poignant images highlighting the different projects supported by the collective. Not to mention the total absences of silence during the breaks; all of the attendees made the most of the amazing network of people present, and made no attempts to sit silent staring at their phone screens (unless to share their day on social media!) but engaging with one another and sharing ideas. 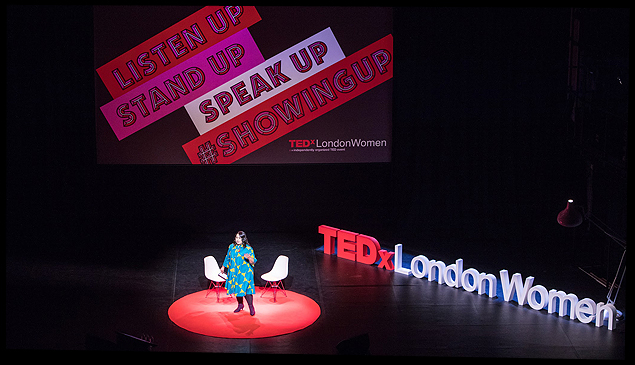 When talking about the event, Maryam Pasha, Director and Curator of TEDxLondonWomen said "So often we women, non-binary and genderqueer people find ourselves in spaces that require us to compete to succeed - not here. TEDxLondonWomen is about celebrating and championing each other."

It was this sheer positive, enthusiastic and non apologetic stance on championing each other which made this event stand out and left such an awe inspiring lingering impression. I can only urge everyone to attend a TEDx event if you have the chance to. They are extremely sought after, and after attending one for the first time, I can see why - everyone wants to feel well and have a sense of community while doing it, and this is exactly what I felt throughout the day.

About TEDxLondonWomen SHOWING UP
The sell-out first TEDxLondonWomen event, ‘Showing Up’, took place on Saturday 1st December, in front of a 900-strong crowd at the Queen Elizabeth Hall on London’s Southbank. Sharing stories of women, non-binary and genderqueer people, rising up, breaking out and pushing boundaries to help shape the future we all want to see, ‘Showing Up’, was held as part of the Global TEDWomen programme. Nine speakers and two performance acts encouraged Londoners to listen, speak up and stand up, to challenge the status quo on issues including fatphobia, feminist artificial intelligence, international collaboration in space, toxic masculinity, the LGBTQ+ community in science, and modern day slavery.

Member of the House of Lords and campaigner against modern day slavery, Baroness Lola Young, in conversation with arts, culture and sports commentator, Beverley Mason.

TEDxLondonWomen was hosted by award-winning journalist, broadcaster and sex educator, Alix Fox, and included a thought-provoking performance from Lady Unchained, who through her poetry, proves there is life after prison. The second performance of the event was delivered courtesy of dynamic Drag duo Adam All and Apple Derrieres, whose unique brand of live blended vocals, coordinated couture and cartoon flavoured Drag, aims to shine a light on issues facing the LGBTQ+ community.

TEDxLondonWomen is part of the global TEDxWomen events programme.

TEDxLondonWomen is an independent TEDx event operated under license from TED.