MMA And Authenticity: A Conversation with Tito Ortiz For The Home Entertainment Release of Matt Eskandari's TRAUMA CENTRE | The Fan Carpet

MMA And Authenticity: A Conversation with Tito Ortiz For The Home Entertainment Release of Matt Eskandari’s TRAUMA CENTRE

Cited by film producer Jeff Most as "The next Vin Diesel", Tito delivers the audience as well as the sheer acting talent. The most electrifying Ultimate Fighting competitor alive today, as intimidating as Tito is in the ring, outside he is an unparalleled fan favorite. A dynamic speaker, Tito's popularity with the fans made for a natural move into other media. He frequently appears on talk shows and in magazine articles and stars in the popular video game, "UFC: Tapout" on Xbox. Having made a cameo appearance in Jet Li's Cradle 2 the Grave (2003), Tito recently delivered a breakout performance with his first starring role, opposite Edward Furlong, David Boreanaz, and Dennis Hopper, in The Crow: Wicked Prayer (2005), scheduled for release in early 2005.

But life for "The Huntington Beach Bad Boy" wasn't always this good, and even as he soars to the top, Tito has never forgotten his roots. The child of two drug-addicted parents, in high school Tito chose wrestling over drugs and gangs, and excelled. He went on to compete at the college level and earned two consecutive titles as California State Wrestling Champion before making the shift to Ultimate Fighting...where he became the world champion less than two years after entering the sport.

Today, as he balances his time between fighting, acting, running his clothing line, "Punishment Athletics", and developing his new game for Xbox, Tito also regularly prioritizes working with inner city children; motivating kids to stay in school, to stay away from drugs and gangs, and to pursue their dreams, no matter what their current situation; and, through his foundation, Tito supports children's charity initiatives and raises money to establish better after-school athletic programs in neighborhoods like the one he came from.

Screen legend Bruce Willis plays Lt. Wakes, a vengeful police detective determined to solve the murders of his partner and an informant. Wakes joins forces with Madison (Nicky Whelan), a witness injured during the shootings. After the killers pursue Madison across the abandoned floor of a hospital, she confirms Wakes's worst fears: the two men are actually corrupt vice cops covering up a crime. As Wakes vows revenge, this heart-pounding action-thriller reaches an explosive climax.

In our interview, Tito tells The Fan Carpet's Marc Jason Ali about why he took on the role, working with the cast and bringing authenticity to the roles he takes...

Right. So, fantastic film, you’re performance as Pierce. What was it about this story that first enticed you to get involved?

Well, I think working with Bruce Willis and Nicky Whelan was a great start of it for me, you know, reading the story, trying to get into it, being an officer and, you know, trying to make ends meet just as the character in general.

It was an opportunity for me to do a little bit of acting and it was a really really interesting story. But at the same time, just the build-up for the ending of being shot but at the same time, just the build up to it, it was something out of the ordinary that I would normally do, you know. People are used to seeing me in fighting stuff or, you know, competing, but this was a real role that I got to get into.

Absolutely. So, obviously with your background being in mixed martial arts, do you find you were able to allow Nicky (Whelan) just go for it with your altercations?

Well, I think it just came back to my acting classes was just really trying find the right character that they where looking for, and that I could really tell a story of who Pierce really was.

I got an opportunity to do it on some of the parts, but once again, I think as learning the art of acting you’ve got to do so much more, you know. In fighting I’ve got to do everything in repetition, over and over again, every single day, and with acting it’s the same attitude but just a little more thought goes into it than just the brawn of fighting. I think a lot of the acting goes into that mode of playing the character itself, and it’s tough sometimes but you’ve got to learn it. You know, there was one part I remember of Nicky Whelan, who is the main star, of me beating her down, that took a lot out of me personally and emotionally because, you know, you’ve got to sell to camera that it’s really happening and to do that it was hard, but at the same time it was a great learning experience and I got to work with some great cast members.

Yeah absolutely. The cast is just incredible, even someone who I haven’t seen on screen for a very long pops up in there with Steve Guttenberg. Now working with those, obviously within the MMA world, you’ve worked with a lot of familiar faces and notable people, what was the atmosphere like on set when working with a lot of seasoned veterans?

Everybody was really laid back and it was really cool, you know, people behaved very professionally, and when we had fun and when we had the opportunity to have fun, but when it was time to work we worked really hard and made sure we got the shots we wanted. But it was a great experience, I learned a lot on it.

And within your own career, is acting the pathway that you’d like to go into now?

I think so. I mean, it’ll be the next segment of my life and my career in general, I can’t fight for the rest of my life, I wish I could, but Father Time can’t really let that happen. The only thing we can’t dodge is time, but as I mature and learn more and more stuff I think acting is the next step, but I’ve just got to find the right roles, all the last stuff I turned down at least five or six roles, I keep getting killed, keep getting killed and I can’t do that any more, I got to try and find at least the hero to a certain extent, you know, where on camera I’m not getting killed every single movie I do. So, it’s tough to pick and choose, but it’s a good thing to pick and choose, I may not be able to do that, but try to find roles that (are?) really able to build my career while at the same time doing good films, and this was one of them, I was just happy to work next to Nicky Whelan and Bruce Willis, it? was an amazing opportunity.

When working out the fight sequences, because none of you seem to hold anything back, do you find that’s the way forward when it comes to those sorts of fight scenes, for the authenticity and realism to these sort of films?

Oh 100%. I know doing the fight scenes is probably the easiest thing for me because I could add a little bit of my own spice to a lot of the stunts, you know, the coaches, the acting choreographers, they get it and I’d go “I’d like to add something to it” and they go “sure go ahead, try it. Wow that’s really good”. But it’s just the experience I had from fighting and from doing other films that I’m able to add it on to anything in the future films also.

Being that the film is all essentially set in one location, do you find those sorts of things easier when building up the tension for the film? Without giving anything away.

Yeah, you know, I think just telling the story of the film in general of a cop who just, he’s not a rookie cop, but just an officer whose just trying make ends meet and he finds a way to do it, and him and his partner we chase this girl around the hospital and make it pretty intense. You know, there’s time where she thinks she can get away and then she gets caught and she gets away and she gets caught, and at the climax of the film, it ended up really really good, I was happy with it, you know, there’s a couple of things that I think we can do a little bit better, but once again it’s just the experience of learning and the craft of acting isn’t as easy as everyone thinks it is, but it was challenging and it was fun and it was exciting and at the same time, I think the climax of the film, towards the end, was just one of those…..it was like “wow”, without giving anything away, she ends up getting away, but it was a great experience. 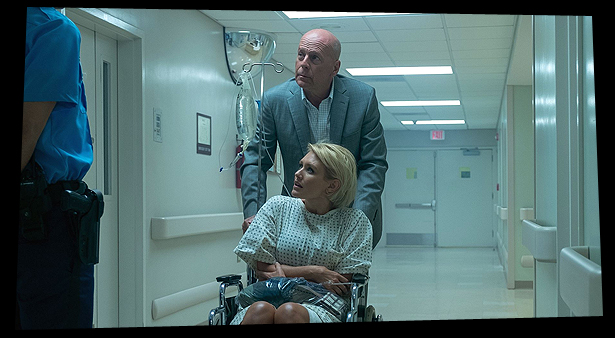