Monopoly Events Present FOR THE LOVE OF 80s – Comic Con Scotland with Appearances from The Cast of E.T and Gizmo! | The Fan Carpet

Monopoly Events Present FOR THE LOVE OF 80s – Comic Con Scotland with Appearances from The Cast of E.T and Gizmo!

Monopoly Events are pleased to present FOR THE LOVE OF 80s - Comic Con Scotland taking place this weekend!

E.T. THE EXTRA TERRESTRIAL - HENRY THOMAS, DEE WALLACE AND ROBERT MACNAUGHTON
The cast of E.T. The Extra-Terrestrial reunite after 36 years.

Henry Thomas (Elliot), Dee Wallace (Mary) and Robert MacNaughton (Michael) reunite and talk about making this iconic film that touched so many peoples hearts in the early 80s.

GHOSTBUSTERS - ERNIE HUDSON AND RAY PARKER JR
Ghostbusters was made in 1984 by Ivan Reitman. It is known as being one of the most popular family films ever made, made even bigger with the addictive soundtrack by Ray Parker Jr and spawned a sequel and even a remake. This event is your chance to hear what Ray Parker Jr and Ernie Hudson (Winston Zeddemore) have to say, the stories behind the scenes and listen to how Ray Parker Jr came up with the iconic sound of the movie.

Battlestar Galactica ran for only 21 episodes but still became a massive cult favourite gaining millions of fans from all over the globe. It was remade in 2004 and ran for 4 series Listen to Dirk Benedict (Starbuck), Herbert Jefferson Jr (Boomer), Jack Stauffer (Bojay) & Terry Carter (Tigh) as they share stories from the original show. 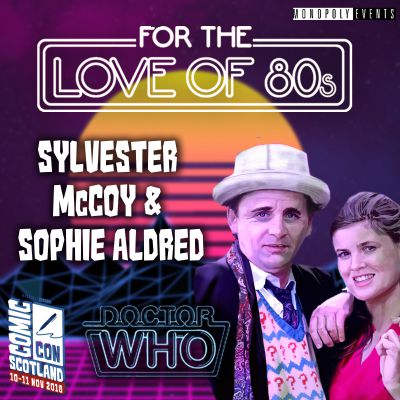 DAVID HASSELHOFF & KITT
David "The Hoff" Hasselhoff has become one of the most recognisable faces on television throughout the world. Aside from starring in Knight Rider (1982) along side his hi-tech superstar car KITT and Baywatch (1989), he is also an accomplished singer and previous judge on Britain's Got Talent. 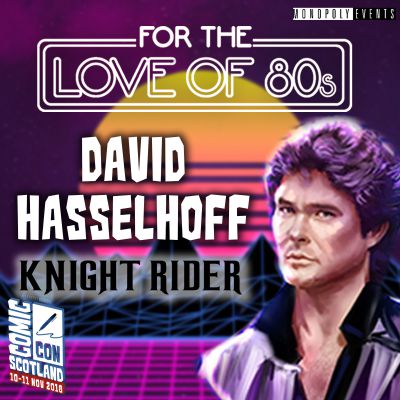 DIRK BENEDICT
Dirk Benedict is an American film and TV star best known for playing the characters Lieutenant Templeton "Faceman" Peck in The A Team which was a huge hit series made by NBC from 1983 to 1987.

"A crack commando unit was sent to prison by a military court for a crime they didn't commit. These men promptly escaped from a maximum-security stockade to the Los Angeles underground. Today, still wanted by the government, they survive as soldiers of fortune. If you have a problem... if no one else can help... and if you can find them... maybe you can hire... The A-Team!" 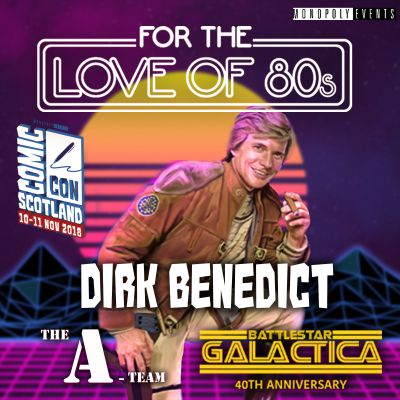 GIL GERARD
Actor/producer Gil Gerard is best known for his role of Buck Rogers in the 1979 movie Buck Rogers in the 25th Century and the spin-off television series that followed. Gerard starred as Dr. Allen Stewart in the daytime soap opera The Doctors for role two years before moving to Hollywood. It was around this time that Gerard formed his own production company, Prudhomme Productions. He then went on to produce and star in his first film, Hooch (1976). He soon landed guest-starring roles in Little House on the Prairie, Hawaii Five-0 and in TV movies Ransom for Alice (1977) and Killing Stone (1978) before he landed the leading role in the movie and TV series Buck Rogers in the 25th Century. Buck was a 20th Century pilot who along with his his young friend Buddy Wade awaken from 500 years in suspended animation to find that the world has been taken over by the outlaw army of Killer Kane.

Audiences first came to know Hasselhoff when he portrayed the popular "Dr. Snapper Foster" for six seasons on CBS's soap opera The Young and the Restless before moving from daytime to prime time, as "Michael Knight" in NBC's hit series Knight Rider. The role garnered him a "People's Choice Award" for most popular actor and the show became a huge success around the world. 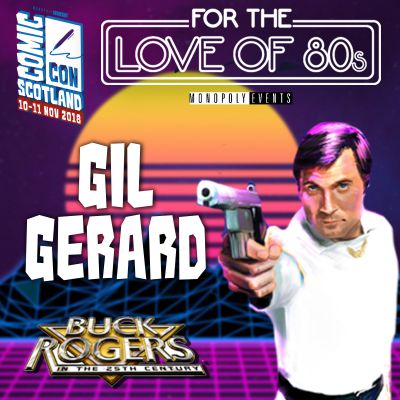 ZACH GALLIGAN & Gizmo
Zach Galligan is best known for playing Billy Peltzer in Gremlins 1 and 2 and also starring in the cult horror movie series Waxwork. He will be bringing with him an animatronic version of his cuddly co-star Gizmo - which is being built especially for Comic Con Scotland 2018. His cute and adorable friend will sit inside his chest on the signing table alongside Zach. You'll have the once in a lifetime opportunity to meet Billy Peltzer and Gizmo and even get a professional photo taken with them too! 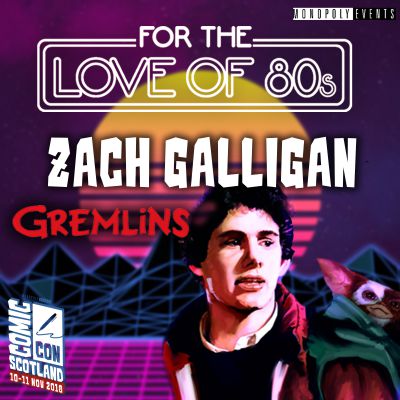 SAM JONES
Sam J. Jones was born in Chicago, Illinois but grew up in Sacramento, California. Before acting he served as a United States Marine and Playboy centrefold. He made his screen debut in the comedy film 10 (1979) then in 1980, he was cast in the iconic role of Flash Gordon in the cult classic of the same name. 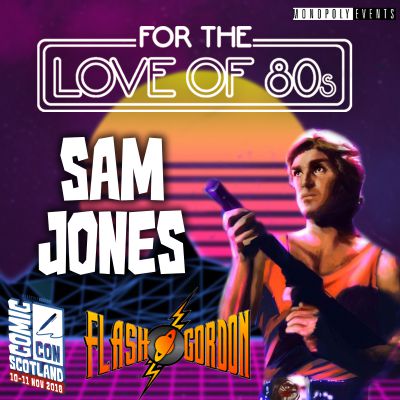 LOU FERRIGNO
Lou Ferrigno is an internationally famous and well respected bodybuilder and actor, who first appeared on TV screens in 1977 as the musclebound The Incredible Hulk is the alter ego of meek scientist David Banner.
"The Hulk" was a huge ratings success and spawned several telemovies after the initial TV series completed its run. Lou continued to remain busy in films and TV with appearances often centred around his remarkable physique. His films included Hercules (1983), Sinbad of the Seven Seas (1989) and Frogtown II (1992). Lou has additionally guest-starred on several TV shows including The Fall Guy (1981) and The New Mike Hammer (1984) and had a recurring role on The King of Queens (1998). In 1997 he was featured in the dynamic documentary about his sensational return to professional bodybuilding at age 43, Stand Tall (1997).

Big Lou is also a successful author with two books detailing his bodybuilding knowledge, and his life behind the scenes playing the Incredible Hulk on TV in the 1970s, plus he has a popular website frequented by his many fans worldwide. 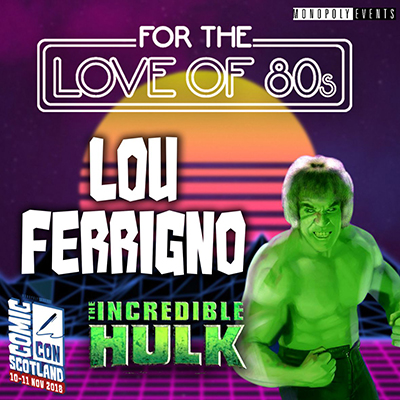 BRET THE HITMAN HART
Reverently described as The "Excellence of Execution" and trained in the storied Hart Family Dungeon, Bret Hart is arguably the greatest technical wrestler in WWE history.

Hart found beauty in the wrestling simplicity. Clad in pink and black tights, he strode to the ring against the whirr of an electric guitar, pausing only to gift his trademark shades to a small child waiting ringside. Inside the ring, he wasted no movement, systematically focusing on his opponents’ weaknesses until they were too tired to endure his patented Sharpshooter submission. He was also an innovator of offence and possessed an uncanny ability to create pinning combinations out of seemingly any predicament.

Hart emerged from Calgary's Stampede Wrestling, coming to WWE as a tag team with his brother-in-law, Jim "The Anvil" Neidhart. Together, The Hart Foundation won the World Tag Team Titles twice and became one of the most popular pairings in WWE.

From there, The Hart Foundation separated, and Bret became and instant sensation as a singles star. He defeated Mr. Perfect for the Intercontinental Championship in August 1991 and became a two-time holder of the title at WrestleMania VIII, where he defeated “Rowdy” Roddy Piper in a memorable clash.

Hart won his first WWE Championship in a non-televised live event in Saskatoon, Saskatchewan, Canada, forcing Ric Flair to submit to the Sharpshooter. It began the first of five WWE Title reigns for the man who boldly declared, "I'm the best there is, the best there was, and the best there ever will be." 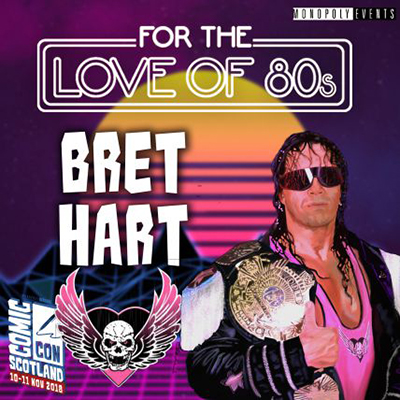 REX SMITH
Street Hawk
Rex Smith played Street Hawk in the American superhero TV series. The focus of the series was Jesse Mach, an ex-motorcycle cop, injured in the line of duty who turned police troubleshooter. He had been recruited for a top secret government mission to ride Street Hawk, an all-terrain attack motorcycle designed to fight urban crime, capable of incredible speeds of up to three hundred miles an hour, and immense firepower.

Rex made his acting debut on broadway in the music Grease and went on to play the first adaption of Marvels Dare Devil as well have having a top 10 single with "You Take My Breath Away" in 1979. 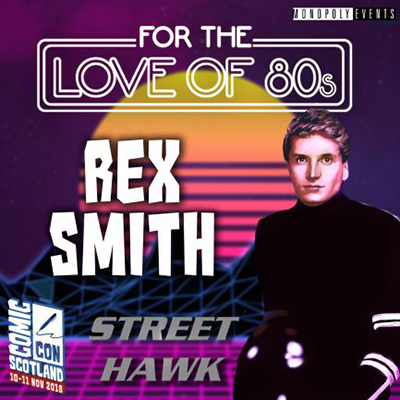 COMIC CON SCOTLAND IS THIS WEEKEND THE 10TH AND 11TH NOVEMBER